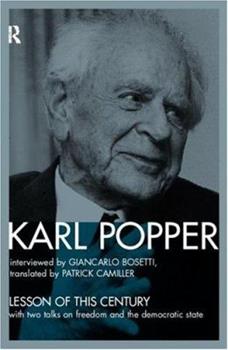 The Lesson of this Century: With Two Talks on Freedom and the Democratic State

One of the century's greatest and most influential thinkers, Karl Popper reminds us that we must recognize our responsibilities in preserving the democratic system we enjoy: it is our actions which will create the world of tomorrow. In these interviews with journalist Giancarlo Bosetti, Karl Popper ranges widely over contemporary political and social issues. He reflects on many topics, from the decline of the Soviet Union and the danger of a Third...

Published by Thriftbooks.com User , 18 years ago
In these interviews with Giancarlo Bosetti, Karl Popper gives us a rare appreciation of current political events, like the Cuba crisis of 1962, Gorbachev's Russia, the fall of the Marxist regimes in Eastern Europe or the Balkan problem (ethnic identity as a State doctrine).His main purpose is individual liberty (freedom of opposition, democracy). The other side of the French Revolution coin, equality, endangers freedom; and if freedom is lost, there will not be equality among the unfree.This is not to say that there should be absolute freedom. Human beings, and certainly the intellectuals, have moral obligations.But his hope in intellectual honesty has been bitterly betrayed. The intellectuals invented the most terrible harm: mass exterminations in the name of an idea, a doctrine or a theory.For Popper, the main problems in the modern world are the search for peace, demographic responsibility (stop the demographic explosion) and good education. At this level, his plea for media censorship is at least controversial. But for him, a message of non-violence is a moral must towards our children.This book should be read as an example of how one of the greatest philosophers of the 20th century proposes solutions for world problems within his philosophical framework and that of other important predecessors like Kant and Mill.Not to be missed.
Copyright © 2020 Thriftbooks.com Terms of Use | Privacy Policy | Do Not Sell My Personal Information | Accessibility Statement
ThriftBooks® and the ThriftBooks® logo are registered trademarks of Thrift Books Global, LLC