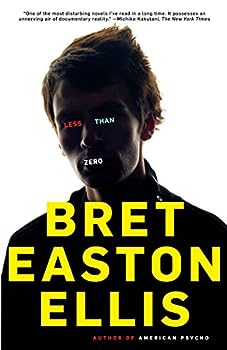 (Book #1 in the Less Than Zero Series)

This description may be from another edition of this product. Set in Los Angeles in the early 1980's, Less than Zero has become a timeless classic. This coolly mesmerizing novel is a raw, powerful portrait of a lost generation who have experienced sex, drugs,...

Published by Thriftbooks.com User , 14 years ago
So 18-year old Clay comes home to Los Angeles from college in woodsy New Hampshire for Christmas Break and very rapidly resumes LA cruising altitude: partying, booze, getting a tan, partying, seeing all the hot bands making the rounds at clubs-of-the-moment like the Roxy or The Edge, more partying, checking out movies in Westwood blitzed out of his mind, cruising around LA, watching bootleg Mexican snuff porn (featuring underage victims & chainsaws and wire hangers), But I'm getting ahead of myself. Bret Easton Ellis's "Less than Zero" is a fine little primer on how the Rich & Famous live and die in LA, with Clay as our Virgil in this descent into a 1980's Dante's Inferno peopled by the Lithium-addled (but thin, baby, thin! and tan! and loaded! filthy stinking rich, Maserati country baby!)Walking Dead. Tunes, by the way, courtesy of Duran Duran and Psychedelic Furrs. He goes to lots of parties: celebrity parties, pre-movie deal parties at Spago with his movie producer Dad and his estranged mother, etc. He does a lot of good drugs. He does a lot of bad drugs. He drives around in his Mercedes. At times he practically shoves whole boxes of Kleenex up his brutalized, quivering snout to calk up the torrent of blood & snot, the collateral damage of his cocaine habit. He scopes out corpses in alleys. "Less than Zero" proves you really can't go Home again, particularly if Home really wasn't much of a place to begin with. And you know, the thing is, with all the bling, the bank, the field trips to Spago & Chasen's, the road trips on the Pacific Coast Highway in the Porsche, holing up at the beachhouse at Monterey---with all that, if your life is so featureless there are no real markers or mileposts, it's pretty hard to get There from Here---or figure out how Here relates to anything at all. As the billboard says: "Disappear Here." Think of "Less than Zero"---the text, our guidebook into this Wonderland of banality, boredom, and high-octane depravity---as a kind of camera obscura, its image fused, heightened, now sharpened, now distorted, with light, speed, and time. When Bret Easton Ellis released "Lunar Park", a kind of transgressive lament for his estranged father, critics howled that Ellis was playing dilettante, dipping his toes into the weedy moat of Horror reserved for Stephen King & Dean Koontz. Really? Ellis hasn't ever written Horror? Even leaving "American Psycho" out of this, read "Less than Zero" and answer that question for yourself: Ellis's palmy, leafy, luxuriant LA is less American Dream than Nightmare, a twilight-realm of hardbodies and supercars where the daytime shadows flit across the flickering water-bottoms of swimming pools, and monsters move in the palm groves. With that in mind, "Less than Zero" revelatory as a scalpel, is also as simple as an elementary school essay: bottom line, it's all about what Clay does on his Christmas vacation. No, really. So it's a little spyglass into the world of Clay &

Published by Thriftbooks.com User , 19 years ago
I read this book and I expected it to be a simple trip into a dark place. I was wrong. This book takes you into a place and a state of mind that is so dark and disturbing it is hard to believe. The book is scary, to be honest. To think that a world like this actually exists should apall people. The book, about an eighteen year old who returns home to L.A. after his first year of college, is deeply rooted in the idea that underneath a lot of things is a darker side. Ellis takes the reader into a place that people thought was only a myth, where sex is as casual as conversation, snorting cocaine is like eating dinner and spending time with your family is like having a root canal. The book is sad beucase it depcits a generation that is lost. They have seen too much at far too young an age. Clay'y (the main character) little sister says to him "We can get our own (coke)." She's thirteen years old.Ellis has done a great job of capturing a mind frame. These people love the life. Clay is seen as an outcast when he is shocked by what he sees. There are sertain passages about Clay's past that are written with such eeriness, they made me shiver. The book acutally gave me feelings of paranoia when I read it. This book is wonderful and is a lot more than less than zero. It is highly enjoyable and interesting. It is one of the darkest, most original, most frightening books I have read in years. It is well worth the time.

Published by Thriftbooks.com User , 19 years ago
Probably my fav book by Ellis seeing as I felt so utterly empty inside after finishing it. These characters Blair, Julian and friends have got to be the most shallow and unfeeling people I've ever read. Sure, Bateman in "A. Psycho" was materialistic but he was insane unlike these kids who're supposedly NORMAL teenagers!! If this is what the rich life in L.A. is all about than I'll be certain to never visit. But I am so sick of hearing people say this was a boring story and don't feel sorry for these kids just because they're spoiled and rich! Can we honestly say we wouldn't be as empty if we lived the way they did with only cocaine and meaningless sex to entertain us? Ellis is brilliant in depicting the lives of materialistic, spoiled brats having to live without love and emotional security. If you're looking for a novel to leave you feeling hollow and disturbed emotionally, I highly reccommend this. It gives the word 'dreary' a whole new meaning.

As Good Now as When I First Read It

Published by Thriftbooks.com User , 20 years ago
I first bought this book at a used bookstore when I was in 8th grade and it completely changed my life. Up until then, I'd been reading the standard young-adult fare required for school and this was my first foray into anything slightly unusual.At first glance, Less Than Zero seems to be more of a travelogue on Los Angeles for the rich and fabulous during the 80's. There is almost no plot to speak of, and the characters exist in an seemingly emotionless vacuum of privilege, drugs, and casual sex. Everyone is more concerned with clothes, cars, and being tan than anything else, and the flippant, 1st-person, present-tense style backs up this assumption. However, a deeper reading proves there's much more lurking below the surface.This is a very well-constructed novel, sparse and economical in the use of words. It is a deceptively easy read, yet immensely satisfying. I have read this book at least a dozen times since I first purchased it, and now own my 6th copy--I keep loaning it to people who refuse to give it back! This is, in my opinion, by far Bret Easton Ellis' finest work.

Published by Thriftbooks.com User , 21 years ago
Any book that people either absolutely hate or absolutely love is definitely a book to read. I personally loved this book because I think that the casual amoralism of Clay and his friends is an authentic look at twentysomething life in LA. This book works as a drug book (a cocaine counterpart to the heroin Trainspotting), as an Eighties book, and as novel about stumbling into adulthood. Like Ellis' other books, Less than Zero is flawed but like his other books (save for the the vast majority of the vile American Psycho) the charms of the book far outweigh its weaknesses. Forget the movie unless you love the brat pack. The book is infinitely better.
Copyright © 2020 Thriftbooks.com Terms of Use | Privacy Policy | Do Not Sell My Personal Information | Accessibility Statement
ThriftBooks® and the ThriftBooks® logo are registered trademarks of Thrift Books Global, LLC