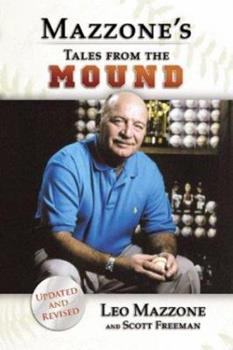 Leo Mazzone's Tales from the Mound

by Scott Freeman and Leo Mazzone

Widely acclaimed as the best pitching coach in baseball, Leo Mazzone stands unique among his brethren. A recent Sports Illustrated poll of active players and coaches overwhelmingly verified his status as baseball's elite pitching guru. ESPN went even further, proclaiming Mazzone as the best all-time assistant coach in any sport. Leo Mazzone's Tales From The Mound gives the inside story of his experiences and pitching philosophies, and a front-row...

Published by Thriftbooks.com User , 13 years ago
Pretty good for a sports & baseball book. Especially this guy, who was a guru - just look at the record. Several years ago, he was asked and developed a work-out routine for the Potomac State College pitching staff, of which the Pot State Coach gave us a copy at our January Baseball Clinic. I'm not a paid coach, but have heard a lot of coaches talk about pitching, read lot of books, and coached say junior high boys for several years, and this routine was impressive. Think may still have it, but would have to hunt for a while. Believe it gave a day by day routine, e.g. starting throwing say 1/3 then 1/2, then say 3/4 distance and also increasing the time and worked on certain pitches. Believe their was a routine for everything, and their was a fair amount of practice pitching. The whole deal was very impressive to us all. He covers this methodology somewhat in his book. Not a Braves fan but you had to admire their pitching staff and this guy.

Mazzone and the Braves

Published by Thriftbooks.com User , 16 years ago
We bought this book as a gift for an ardent Atlanta (nee Boston, nee Milwaukee!) Braves fan. We had looked for some time to find an appropriate book, and this was a winner! Mazzone has been linked with Bobby Cox, the Braves manager, for several years and their results together have been recordbreaking. So much of the success of the Braves has had to do with the consistently high level of perfromance of their pitching staff, and Leo Mazzone has been the constant during all that time, despite turnover of the pitchers themselves. It was interesting to hear from the man himself, and the book makes excellent reading for a real baseball fan. It will be interesting to see how long the Braves maintain their pitching excellence, now that Leo Mazzone will be wearing a Baltimore uniform!

Published by Thriftbooks.com User , 16 years ago
Of the many factors influencing the Braves' stupendous run of 13 straight Division Championships, none of it is more prominent than its emphasis on pitching anchored by Leo Mazzone. "Tales from the Braves Mound" contains anecdotes in Mazzone's career from his pitching days to his forays in the minor leagues and finally to his elevation to pitching coach with Bobby Cox as the manager of the Atlanta Braves. The anecdotes provide some interesting tidbits such as Maddux's request to give him a mound visit because "it's lonely out there" and even Glavine's reluctance to hit a batter after his teammate was beaned by the opposing pitcher. Also, Mazzone defends his coaching philosophies which include the practice of throwing in between starts, getting the pitcher's input on how long he stays in the game, his aversion to the "wild card" format and emphasis on pitch location rather than raw power. Of course, the good coach in him refuses to dwell on the Braves' postseason failures but instead celebrates the team's successes. Having said that, I would have liked him to make the book just a little bit longer by rating the current aces (Randy Johnson, Bartolo Colon) and sluggers (Barry Bonds, David Ortiz) and of course another chapter on the post-Maddux, Glavine era would have made the book perfect. Even if pundits scoff at his team's postseason failures, I do believe real baseball enthusiasts including opposing players and coaches have a healthy respect for his and Cox's ability to mold a staff and in effect a team.

Published by Thriftbooks.com User , 16 years ago
While I enjoyed the behind the scenes experience and Leo's candid discussion concerning his past and present pitchers, the book needed more beef. Too good a subject to pass an opportunity to be more in depth. Other than that, very enjoyable book!

Published by Thriftbooks.com User , 19 years ago
I have been a Brave's fan since the late eighties watching the young guns loose close games by one or two runs, especially in 89 and 90. Scott and Leo team up to give us a highly entertaining behind the scenes look of a decade and more of one of the best pitching staff's in the history of baseball. This book is well written and is a must for any true baseball fan, particularly Brave's fans. Great book Scott and Leo!
Trustpilot
Copyright © 2022 Thriftbooks.com Terms of Use | Privacy Policy | Do Not Sell or Share My Personal Information | Accessibility Statement
ThriftBooks® and the ThriftBooks® logo are registered trademarks of Thrift Books Global, LLC