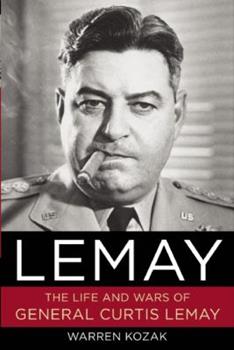 Lemay: The Life and Wars of General Curtis Lemay

Hero or Villain? THE FIREBOMBING OF TOKYO. Strategic Air Command. John F. Kennedy. Dr. Strangelove. George Wallace. All of these have one man in common--General Curtis LeMay, who remains as unknowable and controversial as he was in life. Until now. Warren Kozak traces the trajectory of America's most infamous general, from his troubled background and heroic service in Europe to his firebombing of Tokyo, guardianship of the U.S. nuclear arsenal in...

Published by Thriftbooks.com User , 13 years ago
As the daughter of Curtis LeMay I found this book the most cogent and descriptive of my father the man. Many of the myths that frequently clouded the facts and lead to a misunderstanding are dispelled. Kozak has done extensive research and presented a candid and unbiased account of his colorful career. I never saw my father as anything less than honest, fair and a willing leader beloved and respected by those he commanded. Frequently he has been quoted as having said of the Vietnam War "bomb them back to the stone age". Personally I can set the record straight. This was not his quote but MacKinlay Kantor's statement missed in my father's early editing of the manuscript for "Mission with LeMay". My family is heartened to know that his sacrifices, contributions and patriotism are being recognized.

If You Don't Know LEMAY You Should

Published by Thriftbooks.com User , 13 years ago
Before reading this wonderful biography/history, my information about General Curtis Lemay was limited to his comment about bombing the North Vietnamese "into the stone age." I had also heard that he was the real character behind a bomb crazed character in Dr. Stangelove. This biography taught me how much more there is to know about Curtis Lemay. Warren Kozak takes us through the complex life of an important figure in recent American History. Lemay played a central role in devising American Air Force strategy. He was clearly a military visionary (and hero) who broke new ground that helped America fight wars starting with the Second World War. He was also responsible for developing United States Air Force into the greatest air force in world. As Mr. Kozak takes us through the fascinating story of Lemay's accomplishments he also relates the history of these tumultuous times. Mr. Kozak has a very good eye for the anecdotes and events that inform readers. Lemay's interaction with President Kennedy is one example I am sure all readers will find of interest. While Mr. Kozak clearly admirers Lemay's professional accomplishments he does not shy away from the less attractive and controversial side of his subject. This book is superb history integrated into the biography of an important historical figure who has been largely forgotten. I highly recommend it to everyone.

Published by Thriftbooks.com User , 13 years ago
I began this book because of my interest in the Second World War. Curtis LeMay seems to have been the only significant figure on the American side without an in-depth biography. Well, he has one now, but that is not my point. Looking for a biography of a man of the middle 20th century, I found a biography of the United States in the middle 20th century. Only in America would this child of a terminally unsuccessful, uneducated father work his way through college, join the Army and make such an amazing success of his life without the advantages of a "good family," good looks, charm, social or political adeptness, or even all that much luck. What he had was guts, brains, and the ability to apply relentlessly those guts and brains to the problem at hand. It seems that the only "gift" he was endowed with was the ability to inspire others to work hard and fight hard, but this inspirational "gift" was probably the natural consequence of his own hard work and devotion to duty and country. Indeed, he was such a lousy politician that he thought that he could actually accomplish something useful by a short-term alliance with George Wallace (of all people!), with whose abhorrent views he disagreed. Although I purchased the book because of LeMay's role in the Second World War, what I found most interesting was the application of LeMay's ideas to the problems faced by the United States today. LeMay believed (of course) that is the job of the politicians to decide when and where to go to war (and they had better think long and hard about that!) but, once they have made that decision, it is the job of the professional soldier to bring that war to as quick and successful a resolution as possible. LeMay believed that the all-out approach to war (such as the firebombing campaign he designed for the Japanese home islands) was ultimately the most humane method and resulted in the fewest civilian casualties as it ended a war more quickly. The LeMay Doctrine is directly opposed to the "proportional response" methods endorsed by such men as Robert McNamara, who believed that the US should temper its responses to match those of its enemies and not bring its overwhelming firepower to bear on the enemy. This McNamara view appears to be the view of each Administration since the end of the Korean War - and does not appear to have worked very well.

Published by Thriftbooks.com User , 13 years ago
How rare it is to spin such a compelling tale from the life of a man so reviled. This biography flows like a novel, and though one knows the historical facts the context is filled-in remarkably, with anecdotes that are colorful and enlightening. The sense of tension maintained throughout the book makes the story a true "page-turner"; I found myself drawn into this life history in a way that I would never have felt possible for a person with LeMay's reputation. Anybody who lived through the 60's, or has an interest in the political currents of the 60's, needs to read this biography. This book may transform the public perception of the archetypal Dr Strangelove figure in modern American History.

"Must read" for anyone interested in World War Two

Published by Thriftbooks.com User , 13 years ago
A gripping story vividly told. The author captures LeMay's life and achievements in a single, telling phrase: a "life of great consequence." His life was of great consequence for the country, for the men serving under him and for aviation in general. General LeMay's virtues, and shortcomings, make for a story that I could not stop reading. His struggles and successes at so many critical stages of his life and the life of this country repeatedly provoked a mental exclamation: "What a man!" His ingenuity and perseverance, whether in pursuing entry into flight school in the twenties or in creating the Strategic Air Command in the fifties, are astonishing. The book's presentation of LeMay's career before World War II was especially fascinating. The political and military situation of those years has spooky echoes in our own time, and it is hard to imagine who would be our own LeMay if we needed one. LeMay's guiding principle--civilians decide whether to go to war, generals must then carry it on so as to end it as fast as possible with the minimum loss of life--threw a new light on his career. It certainly revised my view of LeMay, which reflected the portrayal of "General Jack D. Ripper" in the movie Dr. Strangelove. At the same time, the story, told so clearly, is a modern tragedy. LeMay was not a "man for all seasons," but he was the best man for the difficult seasons of World War II and the Cold War. The very virtues that made him so essential during those periods--his doggedness, his utter focus on results rather than on appearance and style--made him someone for whom the country at peace thought it had no further use. He may not have been the man you want to sit next to at dinner, but he was certainly the man you want to stand next to in combat. A "must read" for anyone interested in World War II or in the country's response to unexpected but lethal external threats.
Trustpilot
Copyright © 2022 Thriftbooks.com Terms of Use | Privacy Policy | Do Not Sell or Share My Personal Information | Accessibility Statement
ThriftBooks® and the ThriftBooks® logo are registered trademarks of Thrift Books Global, LLC