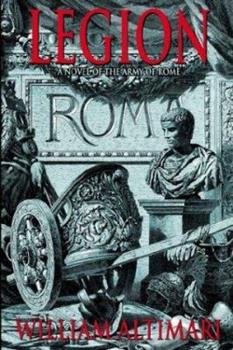 Legion is a stunning recreation of the life of Roman soldiers at a fort on the Gallic frontier in the late First Century B.C. Centurion Quintus Flavius Rufio returns to Gaul near the Rhine to finish his career with the Twenty-fifth Legion. An invasion by the Germans is imminent, and the veteran Rufio takes command of a century with many recruits whom he must train on the eve of the German onslaught. Rufio's return to Gaul has a wider significance...

Published by Thriftbooks.com User , 14 years ago
In Legion, William Altimari explores the culture and the motivations of the soldiers who maintained the peace, defending the world of Rome and its allies against the Germanic tribes across the frontier; deterrence by their presence when posible, fighting with cold steel when required. It is history, but his protagonist would understand the world of today. The novel is set in Gaul at the end of the First Century B.C., when the border was not yet settled. The narrator is Diocles, a Greek scholar given the mission of writing the history of the Legion, a task he quickly appreciates he can only achieve by becoming a Legionary himself. The protagonist becomes his Centurion, a veteran, Ruffio, who bears within him the knowledge and strength of the Legions of Rome. Legion is a well-researched examination of life in the Legion, the organization of the Legion, the arduous training required to be a skilled fighting man, as Diocles learns the required skills, from constructing a marching fort, as the Legion did every night on the march, to the elements of the various weapons used by a Roman Century. In the background, and soon not in the background, is the rising danger of imminent warfare as Suebi seek to force the Legion to withdrawn from the frontier. From the bloody skirmishes to the final climactic battle, dramatic combat is realistically portrayed, culminating with Diocles becoming certain that the quality of men he knows in Rome cannot match that of the young fighting men of the Legion. Altimari is not unmindful of the parallels between the soldier who defended the civilized world of Pax Romana and the soldiers of today who, like Rufio, know that peace, and civilization, must be maintained by might and on the society's frontier. As Ruffio declares: "All civilization, all learning, all that we've created is balanced on a swordpoint. The survival of all that we love is guarded by the swordpoint of Rome. Dare we let it go.?"

Historical fiction at its best

Published by Thriftbooks.com User , 17 years ago
Legion is one of those rare books that captures the reader's attention and keeps you reading long after you meant to stop for the night. The pace and the detail of the book are excellent as Altimari cleverly inserts details of life in a Roman Legion into the story; you learn what it meant to serve in the army of Rome while you read the book. The reader is also given enough information to see some of what is coming in future pages, but never knowing for sure how it will turn out or what twists might arise. Readers will also appreciate the depth to which many of the characters are developed, particularly Centurion Rufio. Much of the early part of the book is a journey of discovery into the personality of Rufio and at the end of the journey one feels like they actually know Rufio. Careful readers will also enjoy how Altimari uses the setting on the frontier of the civilized world to build the tension in the story. In a style comparable to classic western novels, the main conflict in the story deals with survival on the frontier and the types of people and actions that are needed to settle a wild land. If you love characters such as Shane or Hondo, you will love Rufio. Finally, while the final battle scene is fictional, many of the actions are based on events from real battles in Roman history. This makes the battle come alive and gives the reader a sense of being in the thick of real combat; just as a reader smells the smoke of battle in a Patrick O'Brian tale you feel the crash of the front lines in Legion.

Superb Recreation of the Roman Army

Published by Thriftbooks.com User , 17 years ago
As a military historian and museum curator I enthusiastically recommend this book to anyone interested in the military of the Ancient World. It is a delight both as a wonderful story and in its description of Roman military life, what it might actually have been like to be there. This book does a better job than any other I have read in portraying the true spirit of the professional Roman soldier of the early Empire. I'm also struck by the image of Cenurion Rufio as the defender of his culture very much in the way our military today is defending us from other forms of barbarism. A friend of mine so liked this book he sent a copy to his son who is a cadet at West Point. I can hardly wait for another installment on the life of Centurion Rufio.

Published by Thriftbooks.com User , 17 years ago
William Altimari has brought the past to life in Legion. The depiction of Rufio, the quintessential Roman Centurion is frank, tender, brutal and brilliant. We come to know him, care for him and understand the honorable principles that guide him toward the love, and the battle, of his life.Through eyes of Diocles, a Greek chronicler, the precision, discipline and mindset of this great warrior and the men of his Legion are revealed. We come to understand why Rome stood, not through sheer numbers, but due to the dedication of highly trained units for whom defeat was simply unthinkable. A testament to bravery and romance, Legion is at once, a tale of the high drama of battle and of the intimacy of love long lost and forever found.Recommended reading for all lovers of tales well told.-Diane J. Newton, award winning author of Unusual Destiny and Children of the Sun.

Published by Thriftbooks.com User , 18 years ago
LEGION by William Altimari is the best work of fiction I have read in a very long time. I found myself staying up far too late at night as the end of each exciting chapter drew me into the next few pages. Oh just a peek won't hurt; just had to know what was going to happen next! LEGION is a fresh take on the armies of Rome, not set in Rome, but in a far-flung outpost. Altimari has skillfully recreated the day to day existence of a Legion, and woven into the fabric of historical details a compelling tale. From the first day that the main character, a Centurion named Quintus Flavius Rufio, arrives at the Roman fort in Gaul, life for men of the 25th Legion changes. Set in the First Century B.C., on the eve of a massive invasion of German Barbarians, Rufio takes command of a century of raw recruits, whom he must not only train to fight, but to stand their ground, and push back the onslaught. LEGION is a thrilling tale, made hugely enjoyable by Altimari's tight writing, with well developed, strong male and female characters, [and I ain't talking muscles]. The narrative is inviting, tense, pithy, witty, and often laugh out loud funny. The battle scenes left me firmly gripping my copy of LEGION. Altimari has created a ripping yarn that deserves to be made into an epic film. LEGION is the book I am recommending to all my friends. Hail Rufio! Hail Altimari!
Copyright © 2020 Thriftbooks.com Terms of Use | Privacy Policy | Do Not Sell My Personal Information | Accessibility Statement
ThriftBooks® and the ThriftBooks® logo are registered trademarks of Thrift Books Global, LLC