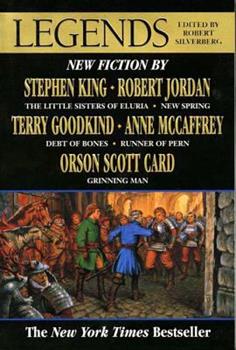 (Part of the Tales of Alvin Maker Series)

Acclaimed writer and editor Robert Silverberg gathered eleven of the finest writers in Fantasy to contribute to this collection of short novels. Each of the writers was asked to write a new story based on one of his or her most famous series: from Stephen King's opening piece set in his popular Gunslinger universe to Robert Jordan's early look at his famed Wheel of Time saga, these stories are exceptionally well written and universally well told...

This Is the Complete Collection - 11 Short Stories

Published by Thriftbooks.com User , 14 years ago
Inside this book you get to sample the writings and the worlds of eleven different fantasy authors. From high fantasy to alternative reality, there's something for every fantasy fan within the pages of this collection. Included are: "The Hedge Knight" by George RR Martin. This story was why I read this book and it was worth it. Set before A Song of Ice and Fire, the main character was very sympathetic and the story was up to Martin's writing. "The Little Sisters of Eluria" by Stephen King. I didn't know SK had written a fantasy novel and could picture it until I read this story. It is dark fantasy, to be sure, but it was interesting and had an unexpected twist at the end. "The Sea and Little Fishes" by Terry Pratchett. I don't think I will ever read a Pratchett novel, and reading about witches isn't my thing, but I did laugh several times--out loud--while reading this short story. Entertaining. "The Seventh Shrine" by Robert Silverberg. The world he's created sounds interesting, and the story pulled me straight through from start to finish; but when I got to the end, I was left hoping for more (of a climax). "The Grinning Man" by Orson Scott Card. Okay...I had not read any other Alvin Maker stories and I'm not sure they're my thing. Maybe I prefer high fantasy. Anyway, I didn't enjoy this story, set in an alternative reality N. America, as much as the others but am curious to read a complete Card novel. Creative. "The Wood Boy" by Raymond Feist. By showing us a glimpse of the conclusion at the beginning of the story, and then going back to tell it to us from the beginning, the author had me tearing through this story to find out what happened. Interesting enough to warrant a further look into his "world" via a complete novel. "Debt of Bones" by Terry Goodkind. This was an incredible story and I will be looking into more Goodkind. As a mother, I found the heroine's plight heart wrenching and couldn't help liking her despite the secrets she was keeping. Compelling read. "Runner of Pern" by Anne McCaffrey. What a sweet story. There was conflict and adventure and a hint of romance in McCaffrey's tale. Not integral to her Pern novels at all, but nevertheless, a story not to be missed. Enjoyed it thoroughly. "New Spring" by Robert Jordan. Evidently, this short story was elaborated on to become a book of its own, but it was well written as is. I can see now how my husband got dragged into the Wheel of Time world as Jordan has written a fascinating story that gives background information on the relationship between two of his primary characters. "Dragonfly" by Ursula LeGuin. A young woman knows she has the "gift" but women aren't allowed to learn it. She follows a young wizard, who is just trying to have s*x with her, to a school for only boys, and some of the wizards see in her the possibility of a fulfilled prophesy, so they teach her in non-traditional ways. This story needed to be filled out better, to be longe

Published by Thriftbooks.com User , 15 years ago
This story collection would make an excellent introduction to some of the top authors in fantasy for a new reader, as well as providing much pleasure for someone familiar with the works of these authors. It is, however, somewhat dizzying to leap from epic world to epic world every fifty pages. I enjoyed most of the stories in this collection, and will undoubtably pick up a few new authors and try again some of those authors I did not like when I first tried their books. Here is a list of all the stories in this collection and my rating of them: THE GRINNING MAN by Orson Scott Card: ***** What happens when you put Alvin Maker, Davy Crockett, and a bear together in the woods? Something unexpected, to be sure. This was probably my favorite story in the collection. THE HEDGE KNIGHT by George RR Martin: ***** A tournament in the Seven Kingdoms with one new Hedge Knight and an infestation of Targaryn princes. I confess, I am a huge GRRM fan and I already own the fantastic graphic novel adaptation of this story, which is pretty much word for word the same, with beautiful art. THE SEA AND LITTLE FISHES by Terry Pratchett: **** Excellent Terry Pratchett story, featuring the witch Granny Weatherwax, who loves to win. THE LITTLE SISTERS OF ELURIA by Stephen King **** This was my introduction to King's Dark Tower series, and I very much liked his main character Roland, and the western feel of the story. The story itself was fine, but not outstanding. DEBT OF BONES by Terry Goodkind **** Again, my introduction to Terry Goodkind, and I will definitely pick up his Sword of Truth series, though I hear it deteriorates in later volumes. This story had great characters, was a good introduction to the world without being confusing, and a plot that moved along nicely. THE BURNING MAN by Tad Williams: **** I enjoyed this story about a semi-princess and her soldier love, but the constant "Now that I am old," and "If I had known then.." of the narrator got annoying, and the ending was not as climactic as one would have wished. RUNNER OF PERN by Anne McCaffrey: **** It was short on dragons, but I liked this cute love story of a message runner on the world of Pern. THE WOOD BOY by Raymond Feist: *** I am not crazy about Raymond Feist in general--this story was fine, but I wouldn't have cared if it was ommited from the collection. THE SEVENTH SHRINE by Robert Silverberg: *** I think it is somewhat pretentious of the editor of this anthology to include himself as one of the "legends of fantasy. This tale of a possibly cursed excavation brought to mind Elizabeth Peters (non fantasy) Amelia Peabody series set in 19th century Egypt...but it dragged quite a bit, and while interesting, the ending had little impact. NEW SPRING by Robert Jordan:*** Let's just say that the 11 volume world of Robert Jordan does not adapt well to short form. This story was confusing, even though I have read the first volume of his epic series. But it was kind of nice to see how Ae

Published by Thriftbooks.com User , 22 years ago
This is an incredible book. I snagged it off the shelf simply because I happened to recognize many of the names. I enjoyed almost every story. In fact, reading some of those short stories prompted me to go out and get the series they referr to simply because they were so good. I highly recommend this book! Hopefully it will lead you to read some of the authors' other works as well.

Oh my. A fantasy lovers Dream made paper

Published by Thriftbooks.com User , 23 years ago
Two years ago, if someone told me that for less than $30, I could have almost a dozen novellas from great and varied authors and set in their worlds, I would have told them they were nuts, crazy and from another universe.Lo and behold. Silverberg managed the feat. Are you a Wheel of Time nut? There is a prequel novella for you. Enjoy Tad Williams? The newest fantasy legend, George R.R. Martin? Yep, they are all here. Even stuff for Pern-lovers and Discworld fanatics.The beauty of this work is two fold. First, the quality is high throughout. Nary a clunker in the lot. Second, if you haven't read all the authors' and their series, this is a good taste of a bunch of the best. Never considered Stephen King before? Here is a Gunslinger novella. If you are one of those afraid to try the huge Wheel of Time, the novella by Jordan gives a nice feel for his writing.Buy it for a friend. Buy it for yourself. Buy it for someone who has never tried fantasy before. (I have done the first two...).

A great collection, with stories by many favourite authors.

Published by Thriftbooks.com User , 23 years ago
LEGENDS: SHORT NOVELS BY THE MASTERS OF MODERN FANTASY, edited and introduced by Robert Silverberg, presents "eleven rich, robust new stories by the best-known and most accomplished modern creators of fantasy fiction, each one set in the special universe of the imagination that made that writer famous throughout the word." Thus we have, for instance, a Wheel of Time story by Robert Jordan, an Earthsea story by Ursula K. Le Guin and, of course, a Discworld story by Terry Pratchett.THE LITTLE SISTERS OF ELURIA is Stephen King's contribution, set in the world(s) of The Dark Tower. It describes how the last gunslinger, Roland of Gilead, encounters first a band of mutant humans and then the not-so-benevolent sisterhood of the title.THE SEA AND LITTLE FISHES features Pratchett's Granny Weatherwax and Nanny Ogg, set at the time of an annual competition to see who's the best at witching. Granny's inevitable victory shakes up the whole kingdom as she shows how she's bad at being nice but good at being right.DEBT OF BONES is a story by Terry Goodkind, set prior to the events of his Sword of Truth books. Abigail come to plead with the First Wizard to save her family from an early invasion of the D'Harans, but her mission does not go quite as she intends...GRINNING MAN presents Davy Crockett as he never was, in Orson Scott Card's alternate America of the Tales of Alvin Maker. Crockett causes trouble for Alvin who, thanks to the young Arthur Stuart, learns an important lesson in distinguishing truly good acts from the disguises taken by evil acts like revenge.THE SEVENTH SHRINE describes an event on Silverberg's own Majipoor, late in the reign of Valentine as Pontifex, the senior ruler of the giant planet. A strangely ritualistic murder during an archeological dig of an ancient alien city prompts Valentine to investigate.DRAGONFLY revisits the wizards (and witches) of Earthsea in Le Guin's contribution. A local witch has detected some unidentified power in the girl Dragonfly but refuses to teach her any magic. Years later, the grown woman concocts a scheme with a visiting wizard to pass herself off as a man and study on Roke.THE BURNING MAN is a story from Tad Williams' lands of Osten Ard, the setting of his Memory, Sorrow and Thorn books. It is told by Breda, orphaned by one king and then adopted by another, and concerns first love, an occult rite and a difficult choice, all of which will burn in her mind forever.THE HEDGE KNIGHT is an entertaining tale from the Seven Kingdoms of George R. R. Martin's A Song of Ice and Fire. Squire Dunk finds himself with a knighthood when his master dies, and decides to enter a local tourney to prove himself a champion.THE RUNNER OF PERN is set, of course, on Anne McCaffrey's world. Tenna is the daughter of a long line of runners, message carriers for those who cannot use dragons to send their letters, and her story provides insights into yet another way of life on Pern.THE W
Copyright © 2020 Thriftbooks.com Terms of Use | Privacy Policy | Do Not Sell My Personal Information | Accessibility Statement
ThriftBooks® and the ThriftBooks® logo are registered trademarks of Thrift Books Global, LLC