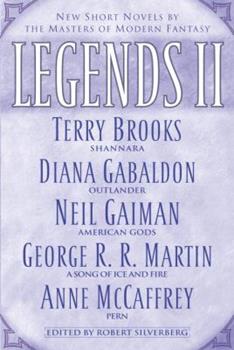 Fantasy fans, rejoice! Seven years after writer and editor Robert Silverberg made publishing history withLegends, his acclaimed anthology of original short novels by some of the greatest writers in fantasy fiction, the long-awaited second volume is here.Legends IIpicks up where its illustrious predecessor left off. All of the bestselling writers represented inLegends IIreturn to the special universe of the imagination that its author has made famous...

A great introduction to the masters of fantasy.

Published by Thriftbooks.com User , 15 years ago
I originally bought this collection simply for G.R.R. Martin's story. I was pleasantly surprised to find that I really enjoyed all of the stories included. Robin Hobb, whom I have not previously read was especially good. And the Raymond E. Feist story of the messenger was great. Basically, this collection does a great job of introducing the reader to a wide and varied number of fantasy authors. I found it at Barnes & Noble in the bargin section. It was a great deal! Get it if you can find it!

Going back for more

Published by Thriftbooks.com User , 16 years ago
Both Legends I and II are must haves for any SF/Fantasy fan. I orginally purchased Legends I for Robert Jordan's and Tad William's short stories. I then promptly put it up on my shelf for a few years. I picked up Legends II for the Robin Hobb short. I then also filed it on my shelf. Somehow I have made it through tons of fantasy while dodging some of the most "advertised" names. I recently ran out of books to read. In my search for new authors, I scowered the net, and asked several friends for recommendations. One of my friends suggested I pick up Terry Pratchett, my net search said try George R.R. Martin... I had a fleeting thought that "hey they are popular, wonder if they are in Legends". Sure enough they are and then some. I pulled both Legends I and II off of my shelf and devoured several of the stories that I had previously ignored. It made a perfect way of deciding which authors I would like to read more of and which ones I could probably pass on. Both Legends I and II are treasures which should not be overlooked. I sincerly hope there is a Legends III.

It's better than they think.

Published by Thriftbooks.com User , 17 years ago
This is a phenomenal collection. There has been a tendency among reviewers to compare this volume with the first in the series. The first "Legends" collection (Buy it if you don't have it!) showcased such amazing items as an original Gunslinger story (by Stephen King) and the fundamental prequel to "The Wheel of Time" (Robert Jordan). Let's face it: that's a tough act to top. And yet, this volume holds its own and more. From the missing fragment of Shannara (Terry Brooks) to an original "American Gods" novella (Neil Gaiman) and even an Otherland epilogue (Tad Williams - one of the best in our time), "Legends II" has both a broader scope and a far more intense vision than the original. Any one of these novellas could carry the book alone. Is "Legends II" better than the first "Legends"? Tough question. It's close. The only thing I can say for certain is that there needs to be a "Legends III". It's too good to stop with just two. (Besides, how else will we ever find out how Ser Duncan the Tall survives long enough to... But I don't want to spoil it for you. Read it yourself!)

Legends is one of the best fantasy collections

Published by Thriftbooks.com User , 18 years ago
In 1998 Robert Silverberg edited a collection of fantasy stories titled "Legends". That collection included stories by some of the best and most popular fantasy authors of the time (Robert Jordan, Raymond Feist, Stephen King, George Martin, etc). It was one of the best collections I had read, and allowed me to revisit some familiar worlds and discover some brand new ones. Legends II is the second collection by Robert Silverberg and it is just as good as the first collection. There are some authors that did not return for this collection (Robert Jordan, Stephen King, Terry Pratchett), some that returned (Raymond Feist, George Martin, Robert Silverberg, Anne McCaffrey), and some that are making their first appearance in Legends (Terry Brooks, Robin Hobb, Neil Gaiman, Elizabeth Haydon). These stories are all mostly of high quality, and if you are looking for an excellent sampling of talented and popular fantasy authors, this is the volume for you.What I like best about the Legends collections is that they give me the chance to revisit some of my favorite authors and see their worlds from a different perspective than that which is presented in their novels. Raymond Feist returns to Midkemia with a story set during the Riftwar. "The Messenger" is a story of the messengers who bring the military orders from one commander to another, risking their lives in the process. Some minor characters from the novels make an appearance, and some major ones are mentioned, and though this has a simple storyline, this is a well told story. George Martin continues the story of Dunk and Egg that he began in the first Legends. "The Sworn Sword" is one of my favorite stories in the collection and it is set approximately a hundred years before "A Game of Thrones". I haven't read one of Orson Scott Card's "Alvin Maker" novels in years, but I have thoroughly enjoyed both of the Alvin Maker stories that have been in the Legends collections. "The Yazoo Queen" continues the story of Alvin, and this time mixes in characters like Abraham Lincoln and Jim Bowie (yes, it is appropriate to the story, and yes, it does work). Reading "The Yazoo Queen" makes me want to go back and start reading the series anew. I was surprised by the appearance of Neil Gaiman in this collection, but I can't say that I am disappointed. He takes the character of Shadow, from "American Gods" and tells a story that occurs two years after that novel. "The Monarch of the Glen" is set in Scotland, and while this isn't my favorite of the collection, it was a nice interlude until we get the sequel to "American Gods." Robin Hobb's story is set in the world of the Liveship Traders (more so than the regions of the Farseer). As I have not read the Liveship trilogy, I don't really know how that story connects to the main series, but Hobb's talent is undeniable. "Homecoming" is written as if it was the travel journal of a passenger on a boat who initially thinks that they are on a ship to help set

Published by Thriftbooks.com User , 22 years ago
5 Stars for The Hedge Knight! Most of the other stories were ok, but The Hedge Knight was amazing work, up to Martin's standard of excellence - again, perfectly paced story, with good humor, good twists and excellent storytelling. The book is worth buying just for this great tale!And, if you haven't read A Game of Thrones or A Clash of Kings - it will convince you to! It is said that we find out what happened to the main character in The Hedge Knight in Martin's 3rd book from A Song of Ice and Fire Series, A Storm of Swords.
Trustpilot
Copyright © 2022 Thriftbooks.com Terms of Use | Privacy Policy | Do Not Sell or Share My Personal Information | Accessibility Statement
ThriftBooks® and the ThriftBooks® logo are registered trademarks of Thrift Books Global, LLC