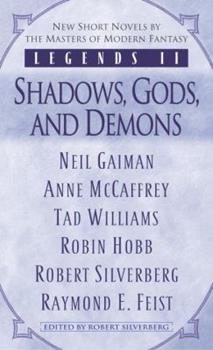 The first of two volumes of original short novels by some of the greatest writers in fantasy fiction, including Neil Gaiman, Anne McCaffrey, Tad Williams, Robin Hobb, Robert Silverberg, and Raymond E. Feist Legends II picks up where its illustrious predecessor left off. All of the bestselling writers represented in Legends II return to the special universe of the imagination that its author has made famous throughout the world. Whether set before...

Published by Thriftbooks.com User , 13 years ago
Legends II is a great quick read. It gives you a glimpse of several different authors and their style, allowing you the opportunity to delve into their worlds and decide if you would like to follow-up on their other stories. I enjoyed them all, some more than others, of course, but would highly recommend this book to anyone "beginning" in fantasy science fiction. Pick it up, read it....you won't be disappointed other than you'll probably be longing for more to read by these fabulous authors!

Love these authors' worlds? Get another peek here.

Published by Thriftbooks.com User , 13 years ago
This series, edited by Robert Silverberg, invited authors of best-beloved SF/F books to write a novella set somewhere in their fictional universe. How well each novella works for you depends on how well you know-and-love that universe; if you never read Silverberg's series set in Majipoor or if (as for me) that story was enjoyable but not OhWowOhWow, the novella set in that world may be only "okay." If you adored an author's world, however, this is another visit to a favorite country, and just one of these stories could be worth the price of the book. For me, that was the first tale in the book: Robin Hobb's novella about how the Rain Wilds were settled, set long before the events of the Liveship Traders. This is not an extra bit of dialog scraped off the cutting room floor... it's a whole other examination of Hobb's marvelous world, adding new dimension, characters, history. And it's absolutely wonderful. I also enjoyed another story from Neil Gaiman's "American Gods" universe -- in which Shadow finds he's made an uncomfortable bargain -- and Anne McCaffrey's examination of what happens when someone (in this case Moreta) is lost "between"... but they were four-stars to me, not five. On the other hand, if I was totally into those worlds, I could easily imagine giving them five-stars. It's that kind of collection. I haven't made it through the other tales here, yet: one each from Majipoor by Robert Silverberg, from Otherland by Tad Williams, and from Riftwar by Raymond E. Feist. I'm not in a hurry to do so, since I either haven't read those series or it's so long ago that I no longer have the passion for 'em (Majipoor was good, but there are other old Silverberg stories I loved better; I'm aware that such an opinion is in the minority). However, I'm also not afraid to tackle the novellas, either, since Silverberg writes excellent "Cliff's Notes" before each contribution, summarizing the books in each series; if your memory of Pern is dusty, Silverberg's intro will remind you of the details to bring it all back. And if you read only part of the series (as I did with Majipoor) it's kind of fun to get a sense of what happened after you wandered away. I really enjoyed this set of novellas. If you're enthusiastic about even one of these worlds, it's worth the price.

Published by Thriftbooks.com User , 15 years ago
Realm Of The Elderlings: Homecoming- Robin Hobb Majipoor: The Book Of Changes- Robert Silverberg Otherland: The Happiest Dead Boy In The World- Tad Williams Pern: Beyond Between- Anne McCaffrey The Riftwar: The Messenger- Raymond E. Feist American Gods: The Monarch Of The Glen- Neil Gaiman
Copyright © 2020 Thriftbooks.com Terms of Use | Privacy Policy | Do Not Sell My Personal Information | Accessibility Statement
ThriftBooks® and the ThriftBooks® logo are registered trademarks of Thrift Books Global, LLC