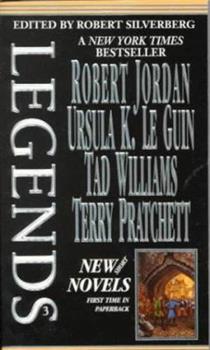 Legends-Vol. 3 Stories By The Masters of Modern Fantasy (Legends (Tor))

A collection of original short novels by Robert Jordan, Ursula K. Le Guin, Tad Williams, and Terry Pratchett returns each author to his own special fantasy world for a new and illuminating story.

Published by Thriftbooks.com User , 15 years ago
Many years ago, when this series of three books first came out in paperback, I bought the first volume because of the Stephen King Dark Tower Story. I love the Dark Tower series and when I accidentally stumbled on this story, I was very excited. Needless to say, I loved the novella but I also read the other novellas in the volume and quickly became an Orson Scott Card fan and have read the Ender series written by Card because of this volume (I was already a fan of Sci-fi so the Ender series was a logical place to start on Card books). This volume also got me interested more in the fantasy genre and before this had only read the Stephen R Donaldson series "The Chronicles of Thomas Covenant" which I still highly recommend as being one of the best fantasy series available. However, since reading volume 1 of the Legends series, I have become a huge fantasy fan. So, I finally ran across this particular volume (Legends Volume 3) in a used book store and when I saw that Terry Pratchett and Tad Williams had contributed novellas, I had to buy it. To start off, I have not yet read any of the Jordan "Wheel of Time" series because I have heard so many different opinions about his style of writing. His books are huge to say the least so that has made me shy away from his series. I must say though, that after reading "New Spring" (which he has since expanded on to make a prequel novel) that I am interested in the series and plan on reading the first book to see if I like it. Yes, it was confusing for the first half of the story since I had no background to this series, but I was intrigued enough to keep reading and ended up enjoying the story. The second story is Ursula LeGuin's Story "Dragonfly". This story is simply beautiful. I have read some of LeGuin's other stories but never any full novels. I WILL be reading this series, though I know the series is older than the others in this volume. Tad Williams' story is also well written and as great as I had expected. I own the "Memory, Sorrow and Thorn" series but have not read it yet, though I have been looking forward to reading it. I have read his "Otherland" series (over 4000 wonderful pages) and loved every word of it. From reading the "Otherland" series, I consider Mr. Williams one of my favorite authors, right up there with Stephen King with character development and making the reader feel like you are there with the characters sharing the adventure with them. This guy is one of the greatest. The last story is "The Sea and Little Fishes" by Terry Pratchett, another one of my favorite authors. This novella is just as funny and well written as any of his books. It is a great introduction to his Discworld universe and provides an excellent example of this series. Read this story, laugh, and nod your head in agreement to the social commentary that he throws in and I bet you will want to read more. Pratchett's Discworld series will have you laughing and even on the verge of tears in som

Published by Thriftbooks.com User , 19 years ago
Yes I know it's probably outrageous to the other authors of this book (but I don't care); I bought it for the Terry Pratchett short novel. The Terry Pratchett short novel "All the little fishes" (in case your wondering) takes place on discworld, revolving around Granny Weatherwax and Nanny Ogg and the witch trials. These are the trials they have at the Ramtops every year where each witch proves her worth and shows off her magic ability. If you have the Nanny Ogg cookbook or want to learn more about the witch trials there are references to it in there. It is an excellent short story around 80 pages. However what makes it worth reading is that it really has the No-nonsense gritty fun of Granny Weatherwax proving she is the best of all the witches! Nothing like a contest of wills to bring out the wickedness. If you like Granny weatherwax or are at least smart enough to be afraid of her this story is for you! The other authors are worth a glance too, after all they got famous for some reason or other. I do have to admit Anne McAffery also tempted me to get the book as there is a pern dragon saga story as well, and her stuff is also a good read for sci-fi fans.

As Amazon predicted, I indeed loved this.

Published by Thriftbooks.com User , 20 years ago
I read Legends in one piece, so please bear with me reviewing here. Legends (and Far Horizons) as well, were a brilliant move. Short stories about the worlds you know and love, in one book with yet unexplored worlds... it's awesome, both from the fan's and the publisher's point of view.The quality of the stories was high. King's story was beautiful and enchanting, I am not a great fan of Pratchett, though, Feist and Goodkind's stories were entertaining enough, if not a little predictable. I felt myself also highly attracted to Williams' story for some reason. And I havent even read the series. Still gotta find the first book somewhere. :) Jordan's story, as a WOT fan, was nice enough. It was nice to be back in the WOT world again (this was during the wait for book 9). For me, it grabbed hold and didnt let go. Although I agree that it might be a little vague and incomprehensible for the people who are not familiar with the Wheel of Time. The big thing about Legends though, has got to be the Hedge Knight. It got me to reading Martin's work, and it had got me to favoring Martin above Jordan as soon as I was done with the series.Legends did what it was made for - introduce fans into worlds they havent explored yet, and show them a little bit more of the worlds they know and love. So yes, Legends was brilliant.

Published by Thriftbooks.com User , 21 years ago
I bought this book (#3 only) as a Terry Prachett Fan. I have since bought Tad Williams's Trilogy,and all of the Jordan books. I was impressed by all 4 writers and have broadened my horizons in some fantastic fantasy books. This book is a great intro to modern fantasy wrting, for those who love Tolkein and haven't read anything new (like I was before reading this).

If you're confused by these book reviews...

Published by Thriftbooks.com User , 21 years ago
...That's because it's confusing. The *hardcover* edition contains the writings of eleven well-known fantasy authors. Each author tells a short story. There are *three paperback editions*, each containing just a few of the stories. The reviews on this page are a mixture of reviews for the eleven-story volume (the hardcover), and the five-story volume (the third paperback). THIS review covers only the five-story paperback edition.Having said that, I'll tell you this book is excellent. Robert Silverberg, Tad Williams, Robert Jordan, Ursula Le Guin, and Terry Pratchett are the authors in this volume. Someone in another review on this page foolishly said that the writers were "selling out"; that they wrote these novellas only to make some money, and promote their older writings. How wrong! While it certainly couldn't hurt any of their careers to write these short stories, every true author has stories inside him that would not make a full-length novel. Does that mean that the stories should never be written? That the stories should never see the light of day because of some fool who can't see beyond the end of his nose, claiming "sell out!"? No, these stories were written because the authors felt the *need* to write them.The stories are the perfect opportunity for these very famous authors to spin more tales; tales that otherwise would go unwritten and unpublished, were it not for the mythopoeic idea to collect the smaller stories of these folks into one (er... three...) volumes.The standout novella in this collection is Tad Williams' "The Burning Man", the story of a young girl with a mad stepfather, living in a haunted castle... the SAME castle that young Seoman lives in, years later, in Williams' beloved "Memory, Sorrow, and Thorn" epic. This story is not to be missed! The soulful writing, punctuated by Williams' creative storytelling, make this story the very best in the collection, and well worth the read.Robert Jordan's tale, "New Spring", is the story of Moiraine Sedai and Lan the Warder, years before Jordan's "Wheel of Time" series begins. While of interest only to those who have read Jordan's continuing series, the story is nonetheless well-written.Robert Silverberg writes "The Seventh Shrine", a tale of Majipoor, as well as the introduction. Terry Pratchett writes a new "Discworld" novella, and Ursula Le Guin's tale, Dragonfly, is another story from her "Earthsea" series. Altogether, this is a collection worth reading, and saving; let's hope the authors will consider compiling a new collection in the future, ignoring those who disparagingly call them 'sell-outs'...
Copyright © 2020 Thriftbooks.com Terms of Use | Privacy Policy | Do Not Sell My Personal Information | Accessibility Statement
ThriftBooks® and the ThriftBooks® logo are registered trademarks of Thrift Books Global, LLC