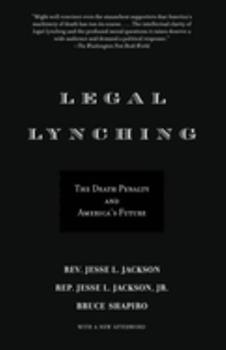 The death penalty is one of the most hotly contested issues in America today. Evidence continues to mount that many innocent people have been executed or are currently living on death row, and that minority groups and the poor suffer from a shoddy public defense system and discriminatory application of capital charges. Meanwhile, the myth of deterrence has been revealed to be false, and an increasing number of Americans are beginning to question their...

The Truth About Executions

Published by Thriftbooks.com User , 13 years ago
The facts collected in this timeless piece have flowed from the written page onto the political stage. The truth about executions being used only on the poor is a travesty of American justice. Following this is a study of examples where the execution itself was not performed correctly and thus easily fell into the definition of cruel and unusual punishment. The coup de grace are the convictions of blacks who were murdered by the state only to discover later on that they were innocent. Their deaths were more the result of racism than criminal acts. It is great to see that our political leaders have picked up the call and repeat the examples cited in this as reasons for the abolition of the death penalty.

Published by Thriftbooks.com User , 17 years ago
I bought this book with a somewhat self serving hope that the senior Jackson's very entertaining oratory style would be peppered through the text. Regardless of whether I agree or disagree with him, I have always found his public speaking to be entertaining and far livelier then most politicians or activists. With this being said I was disappointed to find out that Jesse Sr. really only was present in the forward and those few pages were very restrained. Not one three subject list, not a rhyme to be found, no fire and brimstone, just a smooth and calm forward to a book that explains a thought out position on capital punishment. This calm tone was held through the book, even in areas that most people start to get a bit excited about, religion, racism etc, the authors kept a level course. Of course to be taken seriously they had to, plus there is the celebrity factor of Jesse Sr. that probably hurts as much as it helps in making the book credible. So now to the meat of the book. The authors, and I am assuming it was 90% the work of the professional author that was hired to help, give the reader a brief history of the death penalty in America and then a chapter each on the main reasons that the authors feel the death penalty needs to be eliminated. Again to be fair to the authors the review of the reasons, from bad legal representation to racism and the high rate of conviction reversals to religious questions were all done in a very even handed and one could almost say dispassionate way. I am sure that they felt to have a creditable book the needed to keep a level head and thus have created a book that touches on an excitable topic, but leaves the rhetoric at the door. The authors use a number of examples from the past 25 years, many of which a reader with an interest in the topic would have heard about in the media. The effect is to make the book relevant to the current day and not a historical review of justice in the wild west. I think the biggest complaint I would have is that the book was not overly deep or presented in such way to give the reader more of the pro capital punishment side. The authors could have put in about 10% more effort on each chapter to have really provided a deep and meaningful book on the subject. By skimming some of the topics it left me feeling I was not getting the full story. And at just a touch over 150 pages of real text they had the room to be a bit more verbose. As to explaining both sides, if you are really going to present a book on the elimination of the death penalty then you are hoping to speak to the people on the fence and to do so I think an honest and well received book would try and cover more of what the pro death penalty people really are after, an eye for an eye. The authors could have touched a bit more on these areas and it would have made the book and argument stronger. Overall I enjoyed the book, it was easy to read, well written and level headed, it just was not too deep.

Kudos to the editors

Published by Thriftbooks.com User , 20 years ago
This book is outstanding in its analysis of this important issue. Particularly insightful is the work of editors (ghost writers?) Denis Gaynor and John McFarlane. Mssrs. Gaynor and McFarlane outline in glorious, living detail the horrors of a death penalty culture. Highly recommended.Two to three thumbs up!

Excellent Case Against the Death Penalty

Published by Thriftbooks.com User , 22 years ago
Jesse Jackson has written a wonderful argument against the use of the death penalty. It is too bad that most of those who need convincing will not read this, and those who do will disregard all information or logic to maintain their support for the death penalty and their demonizing of its victims. Jackson provides interesting tidbits of information. For example, when death penalty supporters pointed out a decrease in murder in the two weeks following the first execution after the Supreme Court's moritorium, Jackson replied that the decrease occured only in the Eastern states, and was due to major blizzards at the time.Jackson points out what should be obvious to everyone, that black persons and poor persons are more likely to get the death penalty than the white or rich. The representation of poor defendants in court has been terrible. Jury selection may exclude persons who oppose the death penalty. Since many opponents base their opposition on concern about executing an innocent, while many supporters are wilfully blind about the possibility of a person's innocence; that means death penalty juries are more likely to convict on the flimsiest of evidence.Jackson discusses the Ehrlich study of 1975, the study most prominently cited to ostensibly show a crime-reduction effect of the death penalty. He discussed various criticisms, and pointed out that no other study has repeated the results, but he left out the most damning indictment of Ehrlich's study: the strong dependence of the results on the last year of the study. (Finkelstein and Levin, Staticstics for Lawyers (1990) pp. 446 and 534) If the final year analyzed was 1969, 1968, or 1967, the result was about eight murders reduced per execution. If 1966, seven murders reduced. If 1965, 4.5 murders reduced. If 1964, 1.5 murders reduced. If the study ended earlier in the 1960s, the results would have been two and eight murders INCREASED for each execution.That kind of result was predictable from Ehrlich's use of logarithms of the numbers of executions. In the years 1965 - 1969, there were seven, one, two, zero, and zero executions. Earlier years had double-digit or triple-digit numbers of executions. Using logarithms strongly emphasizes lower numbers over higher numbers. (Decreasing from 200 to 100 has the same effect of decreasing from 2 to 1.) In any case, studies in which the results vary with endpoint are worthless.I believe that the Ehrlich study illustrates a fundamental difference between physical science and other fields of study, such as economics or law. In the sciences, the mathematical error might have been caught by peer review. Even if the study got by peer review, once the error was exposed, the consensus would be to dismiss the study and forget about it except as an example of bad science. But in law and politics, the trend has been to cite the study prominantly and then possibly citecriticism of the study, letting the reader d

One of the most convincing books I have ever read.

Published by Thriftbooks.com User , 24 years ago
For all you readers who strongly support the death penalty, I urge you to read this book. Never have I seen or heard such a marvelous argument against the immorality inherent in the death penalty. Also, after you have read this book, feel free to e-mail me so we can chat about it.
Trustpilot
Copyright © 2022 Thriftbooks.com Terms of Use | Privacy Policy | Do Not Sell or Share My Personal Information | Accessibility Statement
ThriftBooks® and the ThriftBooks® logo are registered trademarks of Thrift Books Global, LLC