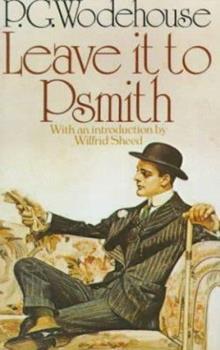 Leave It to Psmith

(Part of the Psmith (#4) Series, Blandings Castle (#2) Series, and The Drones Club Series)

One of the most perennially popular of all the Wodehouse titles, Leave it to Psmith, according to Wilfrid Sheed, "helps to usher in the Wodehouse golden age" -- the age of Bertie Wooster and Jeeves, Blandings Castle and all the rest, among whom the ingenious Psmith ("The p is silent, as in phthisis, psychic, and ptarmigan") is entirely worthy to be counted. A debonair young Englishman who has quit the fish business, "even though there is money in...

Published by Thriftbooks.com User , 18 years ago
Leave It to Psmith (pronounced "Smith") is the first P.G. Wodehouse novel about Blandings Castle and its inmates, Clarence, ninth earl of Emsworth, his daunting sister, Lady Constance Keeble and Beach, the butler. Fans of later Blandings Castle tales will be a little puzzled by this one. Clarence is obsessed with flowers and gardening rather than pigs. The Empress of Blandings is nowhere in sight. And the main plot catalyst is Psmith, that remarkable public school character from the early Wodehouse novels, rather than Galahad Threepwood or Uncle Fred. Although this is not the best of the Blandings Castle tales, it has one of the best plots and does an effective job of introducing the ongoing characters and jokes. The interrelationships of the characters in the past and present are remarkable for their complexity and present lots of deja vu scenes. Psmith and Clarence are two of Wodehouse's finest creations and the central joy of this book is found in their extended interactions. As usual, love and money are at the bottom of the plot. Psmith cannot bear to be in the fish business any longer and advertises that he will do anything -- even commit a crime -- to get a change of pace. Clarence's son, Freddie Threepwood, contacts Psmith and asks him to help with an inside-the-family theft of his aunt's necklace. Although his uncle is rolling in the stuff, Lady Constance keeps him on a short leash. Freddie's uncle will give her another necklace like the one that's "stolen" and use the money to help Freddie and his uncle's step-daughter Phyllis. Freddie needs the money to attract a bride and Phyllis needs to help her new husband get a start on life. Like the other Blandings Castle stories, the castle is full of imposters. Psmith himself is posing as a poet, but is constantly being unmasked by those who choose to keep his secret for a time. Complications come when Psmith finds himself falling in love with a young woman whom he spies outside the Drones Club needing an umbrella. The young woman turns out to be on her way to Blandings Castle as well. It also turns out that Freddie has been proposing to her, but hasn't worn her down yet. Who will win the fair maiden? The book has some of the funniest scenes in it that you can imagine involving flower pots. It's an inspired beginning to the many jokes that follow in later books about potty people residing at Blandings Castle. Capital. Capital. Capital.

The best of the Psmith series

Published by Thriftbooks.com User , 19 years ago
"Leave it to Psmith" concludes the evolution of the Psmith character, from Wodehouse's earliest style of writing with the "Schools" genre, to a comic character whose dialogue keeps the reader entertained throughout. This story sees Psmith enter into Blandings Castle, and though Lord Emsworth is not the dominant character he later becomes, flashes of brilliance are visible in his appearances (and in those of Lady Constance, who plays an important role in this book). "Leave it to Psmith" is packed full of witty dialogue, readily suited to Psmith's character, and the traditional Wodehouse farce for the plot (misunderstandings, a stolen necklace, and so forth). The ending is predictable, of course, but this is hardly the point. It is the use of language that makes this such an enjoyable tale. Wodehouse connoisseurs all have their own favourite phrases, or particular sections of books that strike them as humorous from the prolific collection of Wodehouse's works. Suffice to say, several of my personal favourite sections appear in this book - Psmith at the employment agency, or describing his career as a fishmonger spring to mind. Those who enjoy the Blandings or Jeeves and Wooster series would do well to read this book.

Unlike olives, Psmith is not an acquired taste!

Published by Thriftbooks.com User , 21 years ago
If you own 10 Wodehouse books, this should be one of them. For years I have been a huge fan of the farcical Bertie & Jeeves stories. This book also throws some romance and a touch of mystery into the brew. Be careful that you are not in public or that you are not in the middle of having a drink when you reach page 198, because I am warning you - you will erupt into a fit of freakish laughter which probably won't subside for another 5 or 10 minutes, with intermittent relapses thereafter.The eccentric and congenially self-absorbed Wodehousian hero of this novel is Psmith - pronounced with a silent P as in Ptarmigan (he finds that his birth name, Smith, is just too boring). Although he holds a membership to London's six most exclusive clubs and never a wrinkle or misplaced crease did find its way into his impeccable attire, he finds himself in dire financial straits. To make it worse, while lounging in the smoking-room window of the Drones Club, he instantly falls in love with a passing young dainty - but he has no idea how to introduce himself into her society.Yet there might be a solution to his problems through the ad for work-wanted that he recently placed in the Morning Globe. In the caption he expresses the sentiment that he will take on any job whatever (including assassinating Aunts) except for anything relating to fish. You have a problem? "Leave it to Psmith!"He ends up impersonating a well-known Canadian poet in order to introduce himself onto the guest list at beloved Blandings Castle, presided over by the eminent Lord Emsworth. While there he must steal a diamond necklace from under the tireless eye of The Efficient One - Emsworth's flower-pot-wielding secretary Baxter. Enjoy!

Published by Thriftbooks.com User , 22 years ago
Written at the request of his daughter Leonora, this is the best and most popular book by the prolific P.G. Wodehouse. Psmith was his greatest creation, and if you've read the other three Psmith books first (and you should), it's very touching and funny to see him fall in love and make the ultimate sacrifice: masquerading as a sensitive poet and a jewel thief all at once. Highly recommended.

Published by Thriftbooks.com User , 23 years ago
It's real hard to actually say whether a particular Wodehousian novel is better than any other, but this one really takes the cake (and eats it too!) A marvellous story of the mayhem, chaos and utter confusion wreaked by the suave, amiable Psmith, this book leaves you gasping for more (even if you don't smoke a gasper). For Wodehousian fans, if you haven't read this one, well, what on earth have you been doing all these years!?! And for people who have no idea who or what or when a Wodehouse is, there's no better place to start than this bundle of craziness.
Trustpilot
Copyright © 2022 Thriftbooks.com Terms of Use | Privacy Policy | Do Not Sell My Personal Information | Cookie Preferences | Accessibility Statement
ThriftBooks® and the ThriftBooks® logo are registered trademarks of Thrift Books Global, LLC