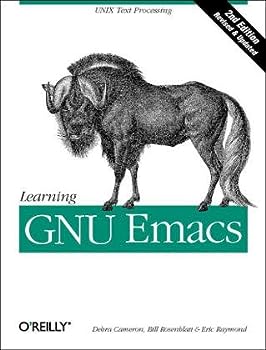 GNU Emacs is the most popular and widespread of the Emacs family of editors. It is also the most powerful and flexible. (Unlike all other text editors, GNU Emacs is a complete working environment---you can stay within Emacs all day without leaving.) This book tells you how to get started with the GNU Emacs editor. It will also "grow" with you: as you become more proficient, this book will help you learn how to use Emacs more effectively. It will take...

Perfect intro to an amazing program

Published by Hazel , 3 years ago
I've been looking at moving on from nano and gedit, and I found this book on Emacs. I'm now an Emacs addict and don't even need a mouse to code anymore.

Published by Thriftbooks.com User , 17 years ago
If a person is thinking of learning GNU Emacs, or if they have been using it and are looking to sharpen their skills and broaden their Emacs savvy, it is a fairly safe assumption that the individual is motivated. This person probably knows their way around a command prompt, and it is likely that they are aware that Lisp is more than just a speech impediment. This person needs a book that offers expert advice without wasting time or insulting the intellect of the reader. Learning GNU Emacs, 3rd Edition is that book. As a programmer, when firing up a monolithic word processor or graphical IDE to edit a simple script or properties file, one cannot help but wonder if these tools aren't overkill much of the time. For a growing number of users, the answer is yes. The tried-and-true text editor is enjoying a renaissance of sorts. One of the most extensible and customizable applications in the text editing category is the venerable GNU Emacs. The tutorials and documentation for Emacs are abundant, but they often prove time-consuming and ineffective for actually learning Emacs. This book is a refreshing break from the documentation many have come to expect. Imagine you had a consortium of leading experts on Emacs at your disposal to teach you how to use it in a conversational, consultative style. That is what has been bundled into this latest edition of the book. The extensibility of Emacs has been both a key strength and a criticism of the application. Its user and developer community have created all sorts of additional capabilities for Emacs, ranging from the impressive to the absurd. The authors have done well to judiciously select what to cover in this edition. For example, while Emacs does have the capability to function as an email client, other applications have long superceded its ability. The authors have chosen not to cover this topic, and instead devote the available space to learning Emacs' core functionality - powerful, efficient text editing. Other peripheral areas of Emacs have been left for the user to research after gaining their solid foundation on Emacs as editor and work environment, such as compatibility modes for programming languages other than Java and Perl. This edition of the book uses the space gained by the removal of esoteric topics to flesh out areas of more common interest. Integration with the major version control systems has been expanded to include Subversion alongside of the age-old standards CVS, RCS, and SCCS. Coverage of support for Java and Perl has also improved, as well as sections for editing HTML and XML. Users wanting to tap into the power of Lisp programming for Emacs should find the coverage satisfying as well. Perhaps the most distinguishing feature of this book is the chapter devoted to the use of Emacs on different platforms. Unix, Windows and Mac OS X users receive equal acknowledgement. The precautions and insights regarding Emacs nuances when used on particular platforms can red

Published by Thriftbooks.com User , 17 years ago
Most of the Unix/Linux senior level Wizzards that I know use Emacs and swear by it. There are others (vi users especially) who swear at it, but that's another story. Emacs is a huge package and is growing bigger. Although you can consider it a text editor, it's a big, massive package that does a lot more than just edit text. At the start of the book the authors comment "Many people think that Emacs is an extremely difficult editor to learn. We don't see why." I think the WHY is that most people start with a simpler more fundamental text editor like vi. Then when they think of moving to Emacs their fingers have to un-learn the vi commands to replace them with the Emacs commands. The authors say they don't recommend the vi emulation mode built into Emacs, but fingers sometimes take a long time to un-learn. If you've just decided to move to Linux, you might want to start with Emacs and never go the vi route. There is no question that Emacs has more power. Comparing to the Microsoft world, I think of vi like NotePad, while Emacs is like Word. There's an interesting table near the front of the book that asks you what you want to do with Emacs. If you want to write HTML, read Preface and Chapters 1-3 & 8. Then after you are getting some work out of the package, you can go to other chapters as you need them - Chapter 12, for instance to use Emacs to compare files. About half the book is on 'simple' text editing, where their 'simple' maybe isn't as 'simple' as the rest of us consider 'simple.' I do a lot of SQL, Chapter 9 talks about the editing support for SQL, and for other programming environments like Perl, Lisp, JDEE, etc. This book is from O'Reilly. O'Reilly does professional quality books for professional programmers. If it's time to learn Emacs, you can't do better than this.

An excellent book for most Emacs users

Published by Thriftbooks.com User , 21 years ago
I have been a vi user for a long time (6 years) and never thought I needed an alternative. This book has shown me the wonderful world of Emacs and its many modes. For very fast editing of text files and search/replace operations, vi is still the best. But for anything else, Emacs is a real time saver. I work a lot with the Fortran and LaTeX modes (with the AUCTeX package) and they both have saved me countless keystrokes, particularly with LaTeX. I find it convenient to keep this book nearby for reference as Emacs' has far too many commands to keep in one's head. It is *certainly* a very good introductory and reference book to Emacs. I will not write Lisp code in my life and the information given here is sufficient for me. Another user has mentioned that rtin and Lynx are better, but most often, you have install another dozen packages before you can use them (atleast if you *don't* use a Linux machine). Gnus works well enough for my occasional newsreading. I highly recommend this book for the 95% that are not too interested in heavy customization or esoteric uses. I most certainly will buy an extra copy to keep as a reference.

As good as a book can get

Published by Thriftbooks.com User , 24 years ago
This is the only computer-related book I have 2 copies of, one for work and another at home. With this book Emacs goes from a powerful text editor to a powerful productivity tool. It amazes me that programmers try to get by with any other editor and this book is the place to start with Emacs.

Published by Thriftbooks.com User , 24 years ago
An excellent book, very thorough with clear examples and explanations. If you already know emacs or want to learn, this book is a must. I've been using emacs for 2 years now but I still learnt alot of new things from this book. I cannot recommend it highly enough.
Trustpilot
Copyright © 2022 Thriftbooks.com Terms of Use | Privacy Policy | Do Not Sell or Share My Personal Information | Accessibility Statement
ThriftBooks® and the ThriftBooks® logo are registered trademarks of Thrift Books Global, LLC