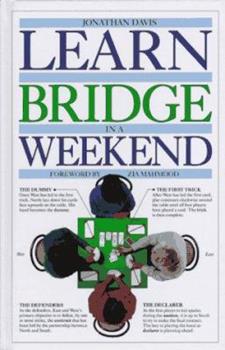 Learn Bridge In A Weekend (Learn in a Weekend)

Bridge--one of the most widely played card games in the world--is sometimes unnecessarily off-putting for beginners. This book introduces the basic rules and concepts and, with the help of illustrations, easily guides the beginner through an elementary game.

Learn Bridge in a Weekend

Published by Thriftbooks.com User , 21 years ago
I had a ten hour plane trip and exactly ten intensly concentrated hours to learn bridge. That weekend I fooled three rather seasoned brige players that I knew what I was doing. The cards favored me, finesses worked (for the most part) and I appeared far more knowledgable than my bridge experience permitted. This book presents the necessities of bridge in an understandable style of teaching. The best part is the photos of card hands which let you focus instead of fumbling with a deck of cards. I had such a good time playing bridge for the first time, I have since signed up for further bridge lessons and now look forward to joining a brdge club. I will always keep a copy of this book for reference.
Copyright © 2020 Thriftbooks.com Terms of Use | Privacy Policy | Do Not Sell My Personal Information | Accessibility Statement
ThriftBooks® and the ThriftBooks® logo are registered trademarks of Thrift Books Global, LLC