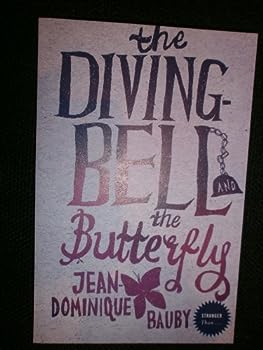 Xstranger Than Diving Bell But

In 1995, Jean-Dominique Bauby was the editor-in-chief of French Elle , the father of two young childen, a 44-year-old man known and loved for his wit, his style, and his impassioned approach to life.... This description may be from another edition of this product.

Moving story of the Founding (?)Editor of Elle magazine

Published by Thriftbooks.com User , 17 years ago
Very Moving story of J-D B., who was a founding editor, I think, ofthe original Elle magazine, in France. He had "locked-in syndrome" and could hardly move a muscle - except for his eyes- or at least one of them. With said eye and eyelid he was able to manage to communicate and dictated this book....He founded a charity for this condition in France and if you google it you`ll find it. Some proceeds of the book may go to this charity ....It has been optioned to be a film with the lead role said to be going to Johnny Depp.....

Stunningly beautiful glimpse into a nightmare.

Published by Thriftbooks.com User , 18 years ago
Wow. This book is beautiful and haunting. You begin the book with the knowledge of Mssr. Bauby's fate. He proceeds to share with us his eloquent and striking observations post-accident. This book is beautifully and concisely written - it's as tight as a drum - and that is a testament more to Bauby's journalistic talents than his impaired condition. An intellectual with a love for opera, music, writing, and food, he comes to life in these pages despite the brevity of the book. We get a decent sense of him prior to his stroke: a man with a full appetite for life. At times, I had to suck in my breath and set the book down to pause, it was so profoundly heartbreaking. He shares with us his deepest, raw thoughts about his daily life, his former lifestyle, his children, the blessings he misses and the pleasures he now looks forward to, as well as the torment he cannot control. A key point, I think, is that throughout the book he sprinkles his persistent sense of humor, and a feeling of hope. It's amazing considering that he is experiencing something we all agree is our worst nightmare. There is no bitterness on these pages, it's more of an honest wistfulness. Like when he says he would have cheerfully killed one of his caretakers for the neglect he suffered at his hands. I will never forget the irony of the photograph from his childhood sent to him by his father; the description of his last day of normal life; the story of Mithra-Grandchamp; the bleakness of his Sundays and how they lend perspective to his other days (and ours); and his trip to smell the French fries. The meaningfulness and importance of the small, everyday events, abilities, and choices we make are cast in a new light after reading this book. But the experience is like having someone open you up and rip out your heart, such is the sympathy we feel for Bauby. In fact, I will likely be haunted by his descriptions of life, both breathtakingly beautiful and immensely sad. What a man. What a book.

an interesting, though upsetting, book

Published by Thriftbooks.com User , 21 years ago
This book was written by a middle-aged man who had suffered a devastating stroke. After the stroke he was only able to move one eyelid, and so the book was laborously dictated letter by letter, using the blinking of his eye to choose letters from a computer screen. In the book he talks about his condition, and meditates about his life, both before and after the stroke. It's a compelling read. It gives you insight into the kind of life that few of us would have any access to. It's upsetting simply because you can't help thinking about how you would react in the same situation.

Published by Thriftbooks.com User , 21 years ago
That's the one word that came to mind after reading Jean-Dominique Bauby's, emotionally uplifting memoir. At the age of forty three he suffered a massive stroke that led to his paralysis, a victim of "locked-in syndrome". That is he was perfectly cognizant, but unable to move any part of his body except his left eyelid. Two days after the book was published in France, he died. The book is truly a testament to the human spirit, and the healing powers of the mind. Far from being a "woe-is-me" feel sorry for myself biography, Bauby rises above that to embrace the life he remembers. A life that sometimes took for granted the simplist of tasks such as shaving, eating, or merely forming a word.Obviously no one lives their life aware of every minute detail as it passes by (except maybe poets), and in fact it's not until something's taken away that we really appreciate it. However, Bauby's book made me grateful and appreciate what I have, and even if just for a little while forget about what I don't.

Published by Thriftbooks.com User , 21 years ago
In December of 1995, Jean-Dominique Bauby, 43 year old editor in chief of Elle magazine in France, suffered a stroke which severely damaged his brain stem. After several weeks in a coma, he woke to find that he was one of the rare victims of a condition called "locked-in syndrome" or LIS, which had left his mind functioning but his body almost completely paralyzed. In a perverse sense he actually got fairly lucky because, unlike most victims, he was still able to move one eyelid. This allowed him to work out, with a speech therapist, a system of communication which entailed winking as someone slowly read through the alphabet. By using this code, he could painstakingly spell out words, sentences, paragraphs and, finally, this memoir.The title of the book refers to the metaphors he uses to describe his situation. The physical paralysis leaves him feeling as if he was trapped within a diving bell, as if there is constant pressure pinning his body into immobility. However, at the same time, his mind remains as free as a butterfly and it's flights are as random. In fact, he calls the chapters of this book his "bedridden travel notes" and, indeed, they eloquently relate his journey through memory.Although Bauby's situation is obviously unique, this book has universal resonance because his condition is itself an apt metaphor for the human condition. It is the essence of Man's dilemma that our infinitely perfectible minds are trapped within such weak containers of flesh and blood. For most of us, at most times, this frustrating dichotomy, between that which makes us godlike and that which makes us mortal, lurks in the background; but the author has it thrust rudely into the foreground, where it necessarily dominates his existence. This makes it all the more remarkable that Bauby is able to "write" about his life with such great humor and generosity of spirit and with so little bitterness.Public opinion surveys reveal an interesting contrast in modern opinions on the "right to die." Contrary to the accepted wisdom, the so-called right is favored by those who are young and healthy, but opposed by those who are old and sick. The very premise which underlies such a right is the belief that the quality of life experienced by the aged and the ill is so inadequate that they would willingly choose death instead. In fact, the evidence suggests that--despite the anecdotal horror stories with which all of us are familiar--people generally cling to life even in the face of suffering which seems unendurable to the well.Bauby's book, for all the horror that we naturally feel at his status, is wonderfully optimistic and life affirming. Sure, there are a few moments of well earned self pity, but they are almost completely drowned out by the author's enduring hopes and dreams and memories. Jean-Dominique Bauby died two days after this book was published, but in it's pages, he left behind one of the great testament's to the splend
Trustpilot
Copyright © 2022 Thriftbooks.com Terms of Use | Privacy Policy | Do Not Sell My Personal Information | Accessibility Statement
ThriftBooks® and the ThriftBooks® logo are registered trademarks of Thrift Books Global, LLC