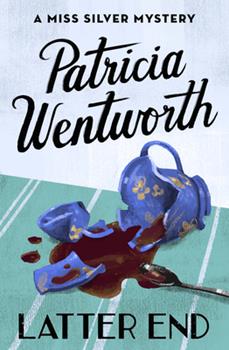 In this classic British mystery starring a sleuth who "has her place in detective fiction as surely as Lord Peter Wimsey or Hercule Poirot," Miss Silver investigates a case of marital murder ( Manchester Evening News ). Lois has always dreamed of being a Latter. The Latter brothers are both so attractive--nearly as handsome as their stately manor, Latter End. After she spoils her relationship with one brother, Lois succeeds with the other, winning...

Drinking tea and watching by the bedroom door.

Published by Thriftbooks.com User , 13 years ago
Patricia Wentworth (1878-1961) was a very prolific and very competent detective fiction practitioner. A slightly older contemporary of Agatha Christie, she brought out an elderly spinster detective sleuth, Maud Silver, a short time before the latter created Jane Marple. Both writers utilized a common formula: create a character whom everybody hates, have that character murdered in some ingenious way, then follow the investigations to the surpise ending. Dialogue forms most of the content (in order to mask the killer's identity) and most of the clumsy investigative spade work is done by unimaginative members of the police force. "Latter End", published in 1947, is a typical example. Indeed, it uses the formula in its most basic form, for all the suspects are members of the one household. Miss Silver gets herself installed in the house and thereafter drinks tea, coughs discretely, interviews everyone, knits socks, and watches from her bedroom door at midnight. These Miss Silver mysteries are immensely readable. You might complain that the final solution and the evidence finally discovered are barely credible, but you must admit you've had many hours of entertainment getting there.

Published by Thriftbooks.com User , 17 years ago
We already know that Patricia Wentworth has the "murder in the country manor" genre down pat, and this book does not disappoint in that fact either. But I feel that Ms. Wentworth can draw characters very well indeed as well. Her characters are so real that as I read, they bring to mind actual people that I know that "were just like that". Her character of Mrs. Latter in this book is a fine example of this talent. She is exceptionally well-drawn, and appears so realistic. This book has a very limited number of suspects when Mrs. Latter dies from morphia poisoning, and it just doesn't seem that any of them could have possibly done it. Or could they have? Miss Silver is brought in to get to the truth of the matter, and you can bet she does.

A Must For Miss Silver Lovers

Published by Thriftbooks.com User , 17 years ago
This story features Lois Latter, a minipulative and selfish woman who uses her beauty and intelligence to get her way. She is married to James Latter who wants everything to be just as it always has been, with his two step-sisters, his dead mothers' friend (Minnie Mercer) and his cousin Antony. Lois has other ideas. Her minipulations are causing conflict and when Lois is poisoned, James Latter is suspect number one. Miss Silver becomes convinced he is innocent. So, who poisoned Lois? The answer is yet another brilliant twist Wentworth style. Another hit for Wentworth and another page turner for me.

Murder in a Country Manor

Published by Thriftbooks.com User , 20 years ago
This is an excellent mystery featuring a country house full of relatives and dependents. Jim Latterly's life is drastically changed when his beautiful new wife dies suddenly. Miss Silver, of course, assists in investigating whether it was murder or suicide. The plot has a great ending and of course features at least one romance.Patricia Wentworth makes her characters real and interesting.
Copyright © 2020 Thriftbooks.com Terms of Use | Privacy Policy | Do Not Sell My Personal Information | Accessibility Statement
ThriftBooks® and the ThriftBooks® logo are registered trademarks of Thrift Books Global, LLC