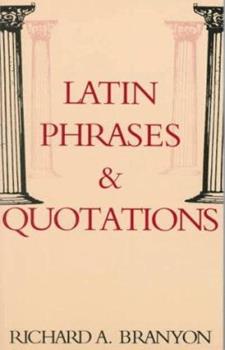 by Richard A. Branyon

This compilation of Latin phases and quotations will clarify previously encountered phrases and introduce a plethora of new ones.

A Little Knowledge IS A Good Thing

Published by Thriftbooks.com User , 12 years ago
Not that I have studied Latin - not even for a day - but who can resist a book that reminds you that "Male parta male dilabuntur" - "Things obtained by evil are lost by evil"? (Or as we say after the 9th race - on that long train ride home from Belmont Park: "Oh, well - evil come, evil go.") It's also been useful for: "The [New York] Post in those days was owned by Dorothy Schiff... [It] was...lacking in the razz-matazz of the News & the Mirror...the News [had]... memorable headlines." One had to do with a court case involving Gloria Vanderbilt, who was in California at the time she was expected to appear in New York to testify. She had taken sick, however, & had to postpone her appearance. The News' headline: "Sick Gloria In Transit Monday," This was a pun on "Sic Gloria Transit Mundi" ("Thus passes the glory of the world"). It was nice to have access to LPQ to be able to refer to the actual, unpunned phrase. (The New York Daily News' Earl King's best headline also rates reverent mention. When the News theatre critic panned the Broadway musical, "Hotel Saigon, King came up with "Hell No, We Won't Go.") This concludes the least reverent review of any book having to do with the study of the language spoken by the ancient Romans. See you at the Coliseum! (The one in Rome; the one in New York is long gone - although the Augustic pretensions of the current Time Warner executives, whose corporate headquarters now occupies the site of the former Empire State Coliseum, are roughly comparable to those of the former rulers of the Roman Mediterranean empire. Pay tribute as you enter the building through its gleaming revolving doors, as you would have in Rome in 100 AD, ascending its now-ancient marble steps.)

Published by Thriftbooks.com User , 13 years ago
It is what it claims to be -- a book of Latin phrases and quotations. Clean layout. The English translations are accurate (as far as I know) and easy to understand. Packed with the most frequently used Latin phrases. The appendices of mottoes, major Greek writers, common Latin phrases, etc. are a nice touch. It'd be useful to have an index of English -- or even Latin -- keywords in future editions.

Published by Thriftbooks.com User , 21 years ago
This is an exiteing book for the person who just wants to get the basics. It is comprehensible and easy to understand.
Trustpilot
Copyright © 2022 Thriftbooks.com Terms of Use | Privacy Policy | Do Not Sell My Personal Information | Accessibility Statement
ThriftBooks® and the ThriftBooks® logo are registered trademarks of Thrift Books Global, LLC