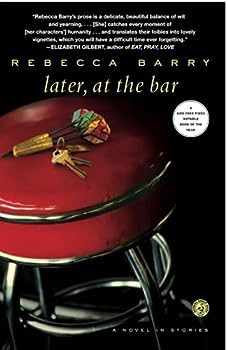 Later, at the Bar: A Novel in Stories

Lucy's Tavern is the best kind of small-town bar. It has a good jukebox, a bartender with a generous pour, and it's always open, even in terrible weather. In the raw and beautiful country that makes... This description may be from another edition of this product.

love and longing and hilarious misadventures

Published by Thriftbooks.com User , 15 years ago
This is the most entertaining collection of short stories I have read in a while. Lucy's bar is the setting for love and longing and hilarious misadventures of its hapless patrons: Rita, the attractive bartender who lives with a woman but sometimes sleeps with men; Elizabeth, a teacher, whose husband has left her for a man; Hank, who sleeps with his ex-wife, Grace, who stays in bed the next morning "in the dirty sheets, smelling like sour bourbon and cigarettes." The row of patrons that line Lucy's bar make a wonderful cast of characters. But the beauty in this collection is Rebecca Barry's writing. She is not angry and doesn't judge her inebriated characters. She is funny and tender and loving. The light she shines in all those dark places is not the hard, florescent variety. The light she shines is bent by sunlight in what Barry describes as "lavender time between night and day when anything can happen and sometimes, at least for a little while, all is forgiven."

Published by Thriftbooks.com User , 15 years ago
What a treat this new book by Rebecca Barry is! Short as it may be it packs a wallop on two levels...the host of characters replete with humorous dialogue and their inter-connected emotional states. Drink is central but it's a foil for everything else. Set in upstate New York, the people who wander in and out of "Later, at the Bar" all have some major quirks. It's like reading an entire year's worth of episodes of "All My Children". Barry's narrative sails along unencumbered as bourbon is poured, beer is guzzled, cigarettes are lit up and tattoos are shown. Oh yes, there are plenty of tattoos! Marriages come and go on short notice, men leave women for other women and other men....well the list goes on. But the author makes each character a loveable and largely complex one. The final scene, where friends of Harlin gather, (as told through the eyes of Grace) is the culmination of a book that dares to embrace the underside of life and make it appear as normal as doings in your own hometown. In the end, people take care of each other. That says it all. Rebecca Barry has given us a classic. It is funny and warm and bound to draw you in and make you stay for a glass or two. I highly recommend "Later, at the Bar" for its wit, charm and all of its endearing qualities.

Curl up with it and enjoy thoroughly

Published by Thriftbooks.com User , 15 years ago
I judge books by how quickly I get past page 20. With this, I couldnt put it down. Very enjoyable read.

A Breakthrough Debut from a Major Talent

Published by Thriftbooks.com User , 15 years ago
I fear robbing you of pleasure by telling you what you will find in this book, so let me tell you what you will not find in this book: 1. You will find not one wasted word. The language is spare and elegant and rendered in scenes that build in intensity from story's beginning to story's end, until, by their concluding lines, the reader feels as though he knows at precisely the same time as the character what it all felt like or meant for the character. 2. You will find not one structural misstep. These stories are arranged perfectly, and although each story shines light aplenty on itself, it's as though some well-placed overhead mirror allows each story to shine precisely the same amount of light upon the other stories as it has shone upon itself. The cumulative effect is an pleasure multiplied in exponents. This is the novel-in-stories, a genre often fairly maligned, at its best. 3. You will find no condescension toward these characters, even though they are almost all of them sad sacks, and even though the locus of their world is a plain old bar, and even though they repeatedly do the very things that will screw up their lives, knowing full well they will do the very things that will screw up their lives. This book is wise enough to allow us to love them as they love each other, and they know it for the beautiful thing it is. In the books' concluding lines, my favorite character, Grace, articulates worldview, theme, and heartsong: "Say what you will about drunks . . . but no one will love you like they can."

This is the best book that I have read in years!

Published by Thriftbooks.com User , 15 years ago
This book is hilarious and fun. I have been in so many bars over the years, all over the world and Rebecca Barry has really captured that world at it's best and worst, without being condescending. It's also perfect beach read and my wife wants me to add that it's great for those book clubs where women get together and mostly drink wine and talk about each other's sex lives.
Trustpilot
Copyright © 2022 Thriftbooks.com Terms of Use | Privacy Policy | Do Not Sell or Share My Personal Information | Accessibility Statement
ThriftBooks® and the ThriftBooks® logo are registered trademarks of Thrift Books Global, LLC