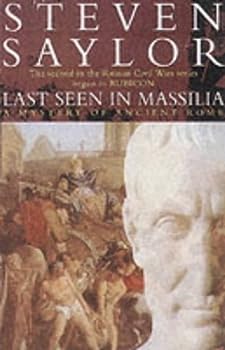 This description may be from another edition of this product. In the city of Massilia (modern-day Marseille), on the coast of Southern Gaul, Gordianus the Finder's beloved son Meto has disappeared--branded as a traitor to Caesar and apparently dead. Consumed...

Head and Toga Above the Rest

Published by Thriftbooks.com User , 20 years ago
Saylor has written another brillant evocation of ancient Rome, with a hero, Gordianus the Finder, who just gets better with age. Still a loving father, still wise and clever, but perhaps a little slower on the uptake and definitely more disappointed, cynical, and sad. And why not, don't we all age that way? The mysteries of the novel kept me guessing, and although the 'happy' end for one character was a bit stretched in my view, the many tragedies others experienced were fully faithful to Saylor's traditional point of view--fate gives with one hand and takes away with the other. Saylor is also to be commended for his slow writing pace--each book and plotline are constructed with great care, no anachronisms are allowed to creep in, and there is never a sense that he has rushed to publication to please his publisher or public. Other writers in the genre, like Lindsey Davis, should take note. I, too, regret that Gordianus is in his 60's now, but one of the strengths of Saylor is the sense of 'gravitas' he gives his characters--with age, dignity. The fact that so many early years were skipped in chronicling Gordianus's career gives one hope that Saylor can perhaps go back at some point and fill in some of the holes. Though, please, spare us the almost daily and weekly chronicle of life we're being given of some Roman informers. I can't recommend this book too highly, though I believe a reading of the earlier books in the series is vital to full enjoyment and appreciation of what Saylor has done here. Please keep writing, Steven, but not too quickly.

Great mix of mystery and history

Published by Thriftbooks.com User , 21 years ago
In the midst of the Roman civil war between Caesar and Pompey, Gordianus the Finder, sometimes detective for Cicero, wants to find the truth about his son, Meto. Did he really die in Massilia (now Marseilles), and if so, who killed him. As Meto was working as a double-agent for Caesar, there are plenty of suspects.Accompanied by his son-in-law, Davus, Gordianus manages to sneak into besieged Massilia through a tunnel. Once there, he finds political bickering, more information of his son's death, and sees a strange murder or suicide (he can't tell which) from the rock from which sacrifices are made. Befriended only by Hieronymus, the city's scapegoat, Gordianus wades through a swamp of lies to find the truth--no matter what the cost.Saylor makes Roman history come alive. His characters, both historical and fictional, ring true both as historical Romans, Greeks, and Gauls, but especially as humans--for all their flaws. For readers who enjoy both history and mystery, this is a must-read.

Gordianus the Finder at his very finest!

Published by Thriftbooks.com User , 21 years ago
If you have read any of the other volumes of Steven Saylor's "Roma Sub Rosa" series, then this book is a *must read.* Story lines that showed themselves in "Rubicon" and "Catalina's Riddle" appear once again, making this one of the most fascinating historical mysteries that I have read in quite some time. Saylor leads you along, and just when you think you know where all the pieces of the puzzle lie, he reveals 'the truth' in a way that truly is both surprising and logical. The history of the conflict at Massilia, brings to life the struggle of Julius Caesar to attain rule over the Roman world. The attention paid to detail in setting this story in the Greek colony-city-state on the edge of the Gaul & Roman worlds, shows a broad spectrum of cultures at one of the most fascinating times in western classical history.As with all of Steven Saylor's works, this novel is highly recommended.

The best Roman mystery series has gotten even better ...

Published by Thriftbooks.com User , 21 years ago
Frequently with series novels of any kind, although maybe it is most evident with mystery series, a clear pattern emerges: after an energetic and imaginative beginning with the first few volumes, the later books recycle characters, plots, and situations. They become, very simply, predictable -- perhaps comfortable for the reader in that predictability, but nonetheless they have lost the capacity for surprise and expansion."Last Seen in Massilia", the seventh novel (plus a volume of short stories) in Saylor's "Roma Sub Rosa" series centering upon the amateur detective Gordianus the Finder in First Century BCE Rome, defies the familiar pattern. Not only has Saylor maintained a high level of creativity and historical atmosphere, the series is steadily gaining added depth and power. Perhaps this is because Saylor has wisely woven the most recent plots into the extraordinary events of the last decades of the Roman Republic, when ancient institutions crumbled and naked ambition propelled the likes of Julius Caesar to the heights. Murder, betrayal, intrigue ... the real-life history of the times has proven fertile ground for Saylor's novels. But it is not merely historical events which make "Last Seen in Massilia" such a strong and even disturbing novel -- that power derives from the characters Saylor has created and the evolving relationships between them. When I finished the last page of this newest novel and set the book aside, I felt genuinely moved by what Gordianus had experienced. Saylor's novels are not only about Roman history; they genuinely examine what lies within us all.

Published by Thriftbooks.com User , 21 years ago
The last place any Julius Caesar supporter would want to visit in 49 BC is Massillia in Gaul. The residents seemingly support General Pompey in the civil war against Caesar. However, that is exactly the place Gordianus the Finder, accompanied by his son-in-law, needs to enter. Just because Caesar's troops led by Trebonius have placed an airtight siege on the city for several months fails to deter Gordianus on his quest. He needs to learn what happened to his son Meto, a former lieutenant of Caesar, now condemned as a traitor and rumored dead.After working his way into the city, Gordianus becomes embroiled in an investigation. A woman was either murdered or committed suicide. Was she pushed or did she jump from Sacrifice Rock. His son-in-law believes a soldier shoved the woman off the rock. His "host" Hieronymus disagrees saying the man tried to stop the woman from leaping from "Suicide" Rock. In any case, Gordianus begins seeking the truth if he is to stay alive in a dangerous city with much intrigue and backstabbing.LAST SEEN IN MASSILLIA, the eighth novel in the Sub Rosa Ancient Rome mysteries, is a great entry in a great series. The story line is loaded with twists and turns as everyone knows neutrality is deadly but the wrong side at the wrong time is just as perilous. Gordianus remains a strong, thoughtful character and the support cast provides profundity and an insightful feel to the period. However, Steven Saylor's tale belongs to Massillia (ancient Marseilles) as readers obtain an incredible perusal of the city at a critical moment in history.Harriet Klausner
Copyright © 2020 Thriftbooks.com Terms of Use | Privacy Policy | Do Not Sell My Personal Information | Accessibility Statement
ThriftBooks® and the ThriftBooks® logo are registered trademarks of Thrift Books Global, LLC