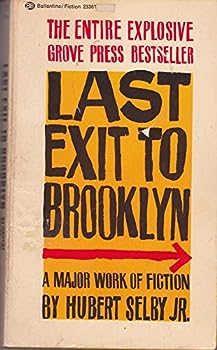 "Last Exit to Brooklyn" remains undiminished in its awesome power and magnitude as the novel that first showed us the fierce, primal rage seething in America's cities. Selby brings out the dope addicts, hoodlums, prostitutes, workers, and thieves brawling in the back alleys of Brooklyn. This explosive best-seller has come to be regarded as a classic of modern American writing.

I don't get the hype around this fella

Published by Baby duck , 2 years ago
I like Henry Rollins. I admire his way of life. I detest how I listened to his "non-stop" recommendation of Selby's work. Just finished this after reading Demon. Couldn't care less for either. The development can be draining, the occasional violence is so cheesy it's painful.

Published by Thriftbooks.com User , 17 years ago
This is a work of sheer genius by anyone's standards. Yes, it's raw, it's shocking even to those of us who thought nothing in modern fiction could shock us but it's one brilliantly sustained song of the brutal, the outcast, the desperate, and at times the cruel who exist inside all of us. I read it over and over again hearing it in my head aloud. I lose it for a few years, then grab it up again. The rhythm of the sentences is perfection. It's for all the time, and the movie -- though a different entity altogether -- was pretty damned fine too. Of course it couldn't be the book. No. It couldn't be quite that dark. Yet it had its own magnificently wrought violence. Selby sings! Here's to him from another writer!

Published by Thriftbooks.com User , 21 years ago
Selby's first book was published in the late 1950s. It was subject to an obscenity trial in England although it escaped U.S. censors unscathed. The book was reissued in 1988, coinciding with the release of a movie loosely based upon it. The book's dark vision remains with the passage of time. Not a book for the squeamish, faint-hearted, or for the conventional.The book is a series of loosely related stories of varying length taking place in the tenements of Brooklyn. Many of the incidents center around an odius local bar known as "the Greeks" and its patrons. The longest story, "Strike" is about a long and ugly labor dispute and its effect on Harry, a worker and the strike organizer, on his marriage and on his sense of sexual identity. The story is detailed, sordid, violent, and fascinating. Other stories explore the world of cheap hookers, transvestites, drug users, petty crooks and drunks. The stories are raw told in a crude language of the streets appropriate to their subject matter.The book reminded me of the early work of probably my favorite novelist, the Victorian writer George Gissing, in its concentration of the underlife in our cities. There is little of the express vulgarity and sexual crudity in the Victorian writer, but I think Gissing and Selby would have understood each other nonetheless.This book is a disturbing picture of low life, partly written in the language and mores of its times but transcending that. There is little in the way of hope or love in the book and I think that the author wants to show us the consequences of a lack or hope and love. It is a book that in a materialist age can teach compassion in a language and style that pulls for attention. It is very sad, but the book invites and demands reflection. It shows us what is missing. This is probably a book that will be remembered in the literary history of America.

Published by Thriftbooks.com User , 21 years ago
The mind simply boggles at the thought that "Last Exit To Brooklyn" should have been published in the 50s. It isn't hard to imagine the storm of controversy it created by its flagrant use of overtly sexual and lewd language. Its undeniable shock value notwithstanding, the novel is still regarded today as a classic for its blistering account of life on the other side of the tracks. The novel is full of unsavoury characters consisting of brutes, louts, pimps and whores. They inhabit a world where the sun never shines. They are all doomed. Georgette, the transvetite, Tralala, the town whore and most fascinatingly Harry, the union leader with a terrible secret even he doesn't know and pays for it when he does. Told through a series of loosely connected vignettes, Hubert Selby Junior's pitiless account of these wretched lives is so brutally honest it hurts to read. His prose is unconventional, utilising a combination of vernacular and "speak write" that has the dizzy immediacy of a screenplay. He switches between the first and third person with hardly the skip of a beat. As a novel, it's a mesmerising and compelling read. I couldn't put it down. Its cinematic possibilities have also been exploited and mined to the fullest some years back in a film version that is remarkably faithful to and captures brilliantly the essence of Selby's novel. The film has deservedly become a cult classic. I am only amazed the director didn't take advantage of the cinematic potential of Selby's last chapter, in which he indulges his voyeuristic licence to its fullest. Robert Altman would have had his camera cutting across the skyline and zooming in turns on the developing chaos within each household in the Brooklyn neighbourhood. "Last Exit To Brooklyn" may still be an uncomfortable read for some today. It's strong stuff, but those with the stomach for it will find it a wonderful read. A true modern classic.

Through a Glass Darkly

Published by Thriftbooks.com User , 23 years ago
I read this book about 9 years ago, and I can stiil remember the raw power of this novel. It is a brutal account of an assorted cast of characters who are basically human garbage. If they are not misanthropic or misogynistic, then they are poorly guided souls looking for love or meaning in a vile enviorment. This novel reminds me of my old neighborhhood in South Philadelphia, where the only true emotions shown are ones of angry, lust and gluttony. Reading this book should show the reader the evil of men, and what not to do in this world. The language is powerful, the atomosphere is heavy, and the vision is dismal. No other book, with the exception of "Naked Lunch" or "City of Night", shows the strength of great writing style and content. A must read!!!!!

Selby's first and probably the best place to start with him.

Published by Thriftbooks.com User , 24 years ago
I first read LAST EXIT when I was in junior high school, having discovered it mixed in with a cache of other books in my mother's library. I read it twice in a week, then a few more times, more slowly, over the following months. Selby crashed into my life like a meteor smacking into the earth -- literally, like someone from another world, which was what he was reporting to me. He wrote about the life in the city around him, which ruined many and forced some to ruin others, and starved people for love and made them turn to hateful substitutes. He also wrote unflinchingly about sexual agony, something I hadn't seen addressed honestly in any fiction at all until I'd read him. He also wrote with great empathy; he didn't hate any of his characters, even the vilest ones, but wanted to give them all a clear moment in the sun for us to see. I've gone on to recommend this book to others that I know will be moved and stunned by it, and they've in turn done the same to others they know. A lot of people will reflexively dismiss the book as disgusting or depressing, but I'll say this: what's more depressing? Reading an honest depiction of the worst and the best in us, or reading something that chooses to ignore the whole question in the first place? Selby will be remembered and loved for a long time after the louder, shallower, more immediate authors of our age are left to rot.
Trustpilot
Copyright © 2022 Thriftbooks.com Terms of Use | Privacy Policy | Do Not Sell My Personal Information | Accessibility Statement
ThriftBooks® and the ThriftBooks® logo are registered trademarks of Thrift Books Global, LLC