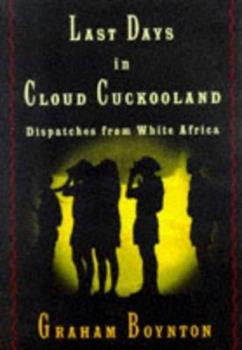 Discusses the various roles of whites in Africa and the changing world of South Africa.

Map to Coming Chaos in Africa

Published by Thriftbooks.com User , 20 years ago
Corruption, violence, and AIDS will throw most of Africa which is below the Sahara desert into chaos over the next 10-15 years, this book is an effective guide for it.

Published by Thriftbooks.com User , 22 years ago
I'm an avid reader of books on southern Africa, and this is one of my favorites -- I'm actually in the process of reading it for a second time. Boynton's stories about 'white Africans' of varying backgrounds come together to form a thorough picture of the decline of white minority rule in Africa from the 1960s to the present. The sections on Rhodesia/Zimbabwe, the author's native country, are of particular interest and value. Boynton's conclusions are controversial, to be sure, but they are refreshingly so, adding a perspective to the debate on Africa's past, present and future that are rarely expressed. If you're interested in the subject, it's well-worth trying to find a copy of this great book.

THE BEST BOOK ON AFRICA AND THE DECLINE OF SOUTHERN AFRICA

Published by Thriftbooks.com User , 23 years ago
AS AN AMERICAN WHO HAS FOLLOWED SOUTH AFRICAN HISTORY, GRAHAM BOYNTON'S BOOK IS A TREASURE. WHAT THIS READER LIKED THE MOST WAS HOW THE AUTHOR LET HIS READERS KNOW WHAT IT IS TO BE AN AFRICAN WHO HAPPENS TO BE WHITE. HIS BOOK IN MY VIEW DENOTES HOW SADLY PREPARED THE BLACKS ARE TO GOVERN THEIR OWN AFAIRS OF STATE AND ECONOMY. BOYNTON'S BOOK IS THOUGHT PROVOKING AND MAKES ONE WONDER IF THE RECOLONIZATION OF AFRICA WOULD BE SUCH A BAD IDEA. AMERICANS HAVE NEVER UNDERSTOOD THAT THE PROBLEM IN AFRICA IS TRIBALISM AND NOT RACE THAT HAS CREATED THE PROBLEMS IN THE FORMER RHODESIA. MR. BOYNTON'S UPDATE ON FORMER PRIME MINISTER SMITH WAS HUMOROUS IN IT'S OWN WAY. WHILE OUT OF PRINT, IT IS A MUST READ FOR THOSE WHO FOLLOW AFFAIRS IN SOUTHERN AFRICA

Published by Thriftbooks.com User , 24 years ago
Set in Bulawayo, Zimbabwe and South Africa. The author clearly never supported apartheid policies, nor white conservative politics. The book relates several accounts of political activities in Southern Africa, from the Belgian relase of the Congo (1960) to Nelson Mandela's release in the early 90's. The author has managed to portray the injustices perpetrated by conservative white rule on black majorities as well as the frustrations of living under black rule, which led to general decline in Africa due to widespread corruption, bribery, poverty and crime. The book does not praise and promote one race at the expense of another, but clearly points out that those who were opposed to the injustices of white conservative rule over a black majority are still fighting atrocities perpetrated by a government run by black majorities. The book describes the effects of black rule and the frustrations of Africans (black and white) who would like nothing more than to live under an African government that does not rob one race of its dignity (Old South Africa) and threaten the existance of another (Kenya, Mozambique and Zimbabwe after independance). A thought provoking book that carries the powerful message that some Africans and sympathisers of black African suffering are actually white.

Published by Thriftbooks.com User , 25 years ago
Now that we know Homo Sapiens come from Africa and Neanderthals are a native of Europe that became extinct, we can appreciate the complexities Graham Boynton is reaching for in this book. The white South Africans may have been greedy and grossly insensitive to the black Africans, but they brought them into the 21st Century and increased their lot materially though they eviscerated them spiritually. While most whites benefited from apartheid, many risked their lives opposing it while others viewed it as a guilt-inducing form of survival and they emerge a more complex and human breed than we were lead to believe -- especially, that is, the Afrikaner majority of the minority whites whose roots trace back to 1654. What were they supposed to think when the whites in power viewed the chaos of the Africa north of them? Boynton says that when the first refugees from Congo arrived in Zimbabwe with tales of unimaginable brutality they could have begun a program of educating the blacks so that when the day came, they would be better partners in a transition to majority rule. Instead, the whites closed the doors hoping to ensure blacks would never have power. But by trying to ensure they didn't give up power and go the way of the Neanderthals, the whites evincing a lot of Neanderthal behavior. Now, after black rule has come to South Africa as well as Zimbabwe, a residual Neanderthal behavior survives in the form of brooding Saturday night "razzes" and a taste for senseless barbrawls. Yet the sweet paradox of the book is that you wind up feeling sympathetic for this ill-fated white tribe. They are split in two: one part of them swearing they were right about "swart gevaar" (black danger), that predilection for African countries to go to hell in handbasket with corruption and crime (two big issues in South Africa today), and spending their evenings crying in their beer at out-of-the-way "bush bars." Others are willing, against great odds, to go on with the show as cops who really get the job done and game rangers who know how preservation really ought to work (hint: make it self-funding through legitimate game sales and let the do-gooders in New York and Oslo or wherever, stay there and shut up). While perhaps not as studied as Allister Spark's "The Mind South Africa", a standard liberal analysis of the Afrikaner personality, it is far more vivid. Boynton's book does not play to a political chorus line either, which is what makes it refreshing. Some will argue that anything less than adulation for the "cause"--black majority rule--and its lead players is "right wing" but then they haven't been hijacked lately or had to put their family on the next plane out of the country while praying to get a green card. Nor have they tried to start a political party in Zambia or buy their choice of car in Zimbabwe. Then there's the 20 year war in Angola..... You get the idea that the Neanderthals would have had a better chance if they had borrowed some good ideas fro
Trustpilot
Copyright © 2022 Thriftbooks.com Terms of Use | Privacy Policy | Do Not Sell or Share My Personal Information | Accessibility Statement
ThriftBooks® and the ThriftBooks® logo are registered trademarks of Thrift Books Global, LLC