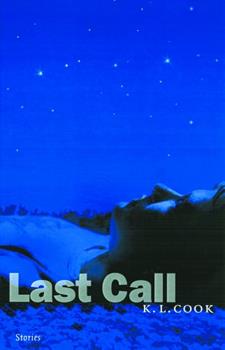 K. L. Cook's debut collection of linked stories spans three generations in the life of one West Texas family. Events both tender and tragic lead to a strange and lovely vision of a world stitched together in tenuous ways as the characters struggle to make sense of their lives amid the shifting boundaries of marriage, family, class, and culture. A series of unusual incidents-a daughter's elopement, a sobering holiday trip, a vicious attack by the family...

Last Call Teases and then Delivers

Published by Thriftbooks.com User , 13 years ago
Last Call is novel in eleven stories. It is divided into four sections and has five narrators, telling about four, non-sequential decades. Stories in the first section are told by one close third person narrator. Three characters narrate the second section, two in first person, one in third. Section three has one first-person narrator. The last section, four, is one story narrated by the original character, though she now speaks in first person. By any stretch of the imagination, this should be immensely confusing, yet to this reader it was not. Cook grounds the reader from the first page by giving a time period: "March-April 1958", a specific time: "Easter Weekend" and by using the first paragraph to draw the reader into scene with specific description of the family, their home life, and their pets. Though seven proper names are listed in that paragraph, after reading "Laura's father," "Laura's mother," and "Laura and her brothers" we are sure that this is Laura's story. Laura's name is in the opening sentence of the next two stories as well. I was not at all put out by having to guess, the details of time and place, the uniqueness of the characters, and the suspense about what will happen are all part of the story's charm. The second story of section two begins with the same date and place as the last story, and it is also in first person, but I knew from the first sentence that this was another voice. "Last call had been made over the intercom, and I began to scrub the stockpile of cocktail and beer glasses on the three-pronged bristles, rinsing them quickly in standing water, a glass in each hand." Gene's sister, Gloria, and her son were working at the Texas Moon, so I felt pretty confident that this was either Gloria or her son. When the narrator noticed the body of a cocktail waitress, I supposed this was Gloria's son, but I knew better than to assume anything. Then I smiled as though the author anticipated my question and was smiling at me while providing the answer: "My mother got me the job." The last story of this section jumps ahead eight years, and the third person narrative alerted me to a shift in narrators. The second sentence filled in the blanks: "Rich rumbled up to the apartment complex and parked on the chalky gravel." I must admit that by now I had started scribbling a sort of family tree type chart, but only because I knew and cared about this family. The author's attention to detail gave me vivid pictures of characters, and I needed to understand all the connections between them. The third section of stories is told in first person by the character Lee, son of Laura, but information was not given freely. The opening story speaks of a boy's father, but the story continues over four pages before the first real hint of who the narrator might be is given. A grandmother says "Laura, Neil's plane has crashed," then seven pages later, the character Neil calls out a son' s name (Lee), which finally gives a name
Trustpilot
Copyright © 2022 Thriftbooks.com Terms of Use | Privacy Policy | Do Not Sell or Share My Personal Information | Accessibility Statement
ThriftBooks® and the ThriftBooks® logo are registered trademarks of Thrift Books Global, LLC