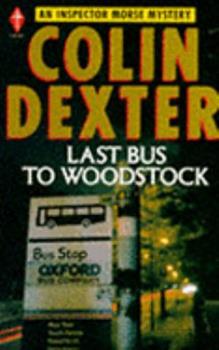 (Book #1 in the Inspector Morse Series)

This description may be from another edition of this product. " Morse is] the most prickly, conceited, and genuinely brilliant detective since Hercule Poirot." --The New York Times Book Review "YOU DON'T REALLY KNOW MORSE UNTIL YOU'VE READ HIM. . . . Viewers who...

Published by Thriftbooks.com User , 14 years ago
Colin Dexter's Inspector Morse now reigns quite alone among the post-Christie detectives. This may annoy any number of readers who prefer other modern writers' detectives, but none of their authors enjoyed the remarkable recreation John Thaw brought to the televised series. There was an almost declasse Cary Grant attraction to his character in the films: it was impossible not to be just a little dazzled by such heady charm. Indeed, along with Alec Guinness as Smiley and David Suchet as Poirot, Thaw's performance was a touchstone, and quite moved Dexter's detective right to the top of public awareness. Will Inspector Morse remain there? I suspect he might. The public adores mysteries, but the memorable characters set the best ones apart from the pack. And Morse appears a most memorable creation. This novel, the very first in the series, quickly showcases Inspector Morse's idiosycrasies in so charming a way that when he's not around the book falters. I noticed a similar reaction of my own when first reading Doyle's The Hound of the Baskervilles - with Holmes so out of the way the plot frequently dragged. Fortunately Morse is far more involved here, and up front, and the story moves along. In many ways Morse seems a predecesor of television's House - they both are very eccentric and brusque, anti-establishment, and creative - both enjoy solving very stumping problems; both play against straight-arrow subalterns; and both tend to make a lot of ego misjudgements before resolving a mystery. With House it's usually - though not always - a medical issue, while with Morse naturally it's solving a murder. Both too are crippled emotionally and resort to pain-killing drugs - House his vicodin, Morse enormous quantities of bitters. The analogy could easily be extended in many other directions. The Last Bus to Woodstock won a well-deserved mystery award in England. Local color - Oxford - rings true, if not all the characterizations, which vary in quality from quite good to paper-thin. Strong sexual content doubtless helped publish in the first place - such are the requirements of editors. For a first in the series it's quite good. Future books elaborate many of the charms of the Inspector. Along with Jasper Fford's way out stuff, Dexter's series must be considered one of the major works of popular detective fiction coming out of England.

Morse and Dexter a Winning Combination

Published by Thriftbooks.com User , 17 years ago
Inspector Morse is known to millions through the excellent BBC/PBS television series. While I am a huge fan of the TV episodes, due in no small part to the work of John Thaw as he portays our hero, I find the level of detail offered by the books even more captivating. This book tells the story of the first case that Morse and his sidekick Sergent Lewis are assigned to. A young woman last seen hitchhiking with a friend is found battered to death in a pub yard later the same night. Morse and Lewis are human and make many mistakes as they fight through lies and deceit to finally uncover the truth. The twist at the end is a real shock, cleverly worked leaving a feeling of sadness with the reader. But the quality of the Morse series by Colin Dexter is not the interesting stories or clever twists that are a requirement of a good mystery. The real attraction is the character of Morse, a hugely complex man, alcoholic, lovable, egotistic, vunerable, cultured, bad tempered, lonely, this is no infallible super hero. Morse also uses his intelligence not his athletic brawn to sift through the clues, something not seen often in murder mystery these days (probably because if the detective has to think so does the author). There are only a few quality mystery writers out there still writing, Mr Dexter is one of the best exponents of his craft and well worth your attention.

Dexter is a true craftsman!

Published by Thriftbooks.com User , 17 years ago
I have faithfully watched the Inspector Morse series on television and have really enjoyed each episode, and I never felt the urge to read the series that the TV show was based on because the TV series is very well done indeed. Well, I'm glad that I decided to read the series finally. Yes, the TV series is quite consistent with the story which in itself is unusual, but the books (this one anyway) are masterpieces! Dexter knows how to build a plot and how to have the reader chasing countless red herrings. And Morse is a wonderful character! John Thaw plays the part very well, but the Morse in the books is even more irascible and testy than Thaw's portrayal. He is brilliant, but somehow vulnerable. A true enigma of a man. I can hardly wait to read the other books in this series now. I'm sure it will put all the shows that I've seen in a new light as Last Bus to Woodstock did.

Great start to a great series

Published by Thriftbooks.com User , 21 years ago
I confess to an unfair advantage .... I was living near Oxford when Colin Dexter first introduced his character, Morse. Dexter was not well known at the time but 'Last Bus ...' was a big success locally. I remember walking or driving the same streets that came to life in his book and I was immediately captivated by the way he brought out the atmosphere of the city and the guilty 'looking over the shoulder' mannerism of the characters. Yes, this was the first of the Morse books and a superb launchpad for those to follow. The way he introduced the setting, the characters to his new readershhip ... Of course, the rest is history. Curiously, I still think this is the best of his books. Terence Hardiman must have been a perfect choice as story reader - he appeared as one of the characters in the TV production - and would have made a good 'Morse'. Gems of literary devices are many, but I particularly liked the bit about the batsman checking the scorebook. A bit like when another character in a different TV series, coincidentally also played by Hardiman, opens an envelope to read the one word denouement, 'Voltaire.' Have I given it away? I think not, but if you can deduce the guilty party from this, you could do Morse's job better than he can. Enjoy.

Published by Thriftbooks.com User , 23 years ago
You won't regret this read. Just when you think you know how it is going to end, you are fooled.Good plot. Good characters. Great dialogue. I now have to find time to read the remaining works of this author - my only regret!
Copyright © 2020 Thriftbooks.com Terms of Use | Privacy Policy | Do Not Sell My Personal Information | Accessibility Statement
ThriftBooks® and the ThriftBooks® logo are registered trademarks of Thrift Books Global, LLC