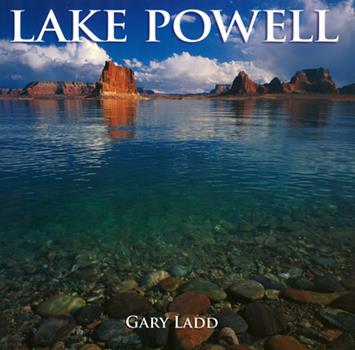 by Gary Ladd and Anne Markward

Published by Thriftbooks.com User , 13 years ago
Somehow I didn't buy one of the picture books available locally when I visited this fabulous area so I've been trying to find a memento for several years. This is a very nice find, full of excellent, but somewhat modest, photos.

Published by Thriftbooks.com User , 14 years ago
Many controversies surround the Glen Canyon Dam and Lake Powell related to environmental concerns and I share some of these. Nevertheless Gary Ladds book is a brilliant photoessay which proves that out of bad policy decisions great beauty may serendipitously arise. I have travelled and photographed these regions for more than 20 years and these pictures are so beautiful and vivid, providing at times panoramic and at times intimate views of this beautiful canyon country, that my breath is taken away.

Not enough photos of Gary Ladd...but the photos of Lake Powell are GREAT.

Published by Thriftbooks.com User , 16 years ago
For many people, the name Lake Powell conjures up images of a blue lake among red rock--of boating over a sprawling, azure sheen of unbroken water, beneath high, vermilion sandstone walls. It calls to mind shorelines lined with tamarisks and cottonwoods, bays mottled with preening mergansers and watchful egrets, water caves full of reflected light, and sunsets mirrored by a shining, landlocked ocean. For others, the name alone is enough to make them start shaking in anger and sadness. For those, Lake Powell is not a lake at all. It's a misbegotten reservoir. It's a crime. It's all that lies between them and the legendary, long lost Glen Canyon-a stretch of the Colorado River so inviting, so overwhelming, and so full of secrets, it's often been called the Grand Canyon's lovelier sibling. Unlike Cataract Canyon upstream, and the Grand Canyon downstream, Glen Canyon was a tranquil place with currents friendly enough for even the most boyish of Boy Scouts and the oldest of old ladies. Edward Abbey considered it the heart of the canyon lands. The residents of White Canyon, Utah--a town since submerged by Lake Powell--considered it home. The Bureau of Reclamation just considered it a good place to build a dam. That dam, Glen Canyon Dam, was built in the early-1960s, to create a reservoir in which to store the water of the Colorado River for the states that needed it, to use the river's water to turn turbines and generate lucrative electricity, to control the Colorado River's seasonal flooding, to bring visiting boaters and their money in from all around the world, and to stop water-borne silt and sediment from clogging Lake Mead, an even larger reservoir downstream. The 710-foot-tall Glen Canyon Dam blocked the path of the Colorado River, the trapped river backed up behind the dam, and everywhere the water could go, it did. It covered multiple rivers, created bays, filled Glen Canyon and side canyons and coves, drowned beavers and snakes and trees, and turned buttes and spires into islands. It changed an almost two hundred-mile-long stretch of the Colorado River into Lake Powell, into a deep, manmade lake with about 1,960 miles of ragged, convoluted shoreline-a shoreline longer than America's West Coast. And then, then there was Gary Ladd. Gary Ladd knew Glen Canyon, and initially hated Lake Powell for inundating it. But then over time, he realized Lake Powell had a very real beauty, a beauty all its own, regardless of its origins, and he started to take pictures of it. And his pictures were gorgeous. And here they are. Right here in this book. Buy this book, and dive into the colors and textures that Gary Ladd manages to capture on film: the blues and the reds, the sugar cookie textures of sandstone, and the shocks of color-filled flowers that burst like life itself up from acres of barren rock. Buy it, set it on your coffee table, and watch the discussions begin.
Copyright © 2022 Thriftbooks.com Terms of Use | Privacy Policy | Do Not Sell My Personal Information | Accessibility Statement
ThriftBooks® and the ThriftBooks® logo are registered trademarks of Thrift Books Global, LLC