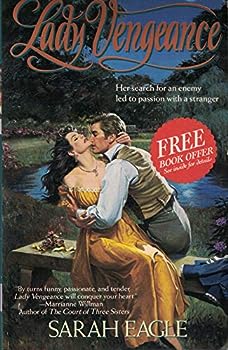 Seeking revenge against the scoundrel who forced her brother into the British army during the War of 1812, Celia Tregaron requests help from Marcus Knowles, who falls in love with Celia at first... This description may be from another edition of this product.

Published by Thriftbooks.com User , 16 years ago
LADY VENGEANCE opens with the beautiful American Celia Tregaron waiting in the bedroom of the Earl of Ashmore. However, she is not there for the usual reasons. Celia thinks Marcus, the British Earl, is responsible for the death of her brother Ethan during the war of 1812, and has a loaded gun pointed at a, well, delicate area. Celia soon discovers she was about to murder the wrong man, which is fortunate because there is an instant attraction between the Earl and his would-be assassin. Marcus, at the promptings of his eccentric family, offers to aid Celia in her quest to find her little brother still alive somewhere in England. They are in for a rough ride through the British countryside - dodging bullets, exposing plots, and, of course, lots of juicy love-making.
Trustpilot
Copyright © 2022 Thriftbooks.com Terms of Use | Privacy Policy | Do Not Sell My Personal Information | Accessibility Statement
ThriftBooks® and the ThriftBooks® logo are registered trademarks of Thrift Books Global, LLC