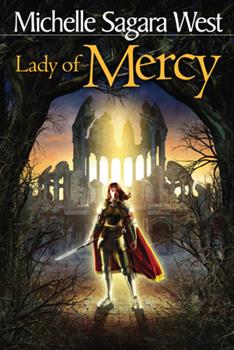 (Book #3 in the Books of the Sundered Series)

Part of the "Sundered" series - the heroine continues her struggle against the forces of evil. The harrowing tale of Erin Elliath, warrior and healer, continues in this episode of the battle between good and evil. When Erin rejects her position as Lady Sara, wife to the First Servant of the Dark Heart, she escapes from her husband's lands with the help of Darin, the Patriarch of Culverne and the last of his line. After combining forces with the deposed...

Published by Thriftbooks.com User , 11 years ago
I loved this book. Although you technically get very little interaction between Erin and Stefanos, the book is definitely one of my favorites. The story picks up right where the second left off. The new characters that are introduced are a wonderful addition. The conflict and pain surrounding both lovers is deep and hopelessly romantic. It simply doesn't disappoint.

Third in the Sundered Quadrology

Published by Thriftbooks.com User , 13 years ago
Lady of Mercy picks up virtually straight from the end of Book 2. Erin has remembered who she was and wants to free the people that Stefanos has enslaved. She and Darin join forces with a mage - Trethar, and a thief - Robert. They journey to Marantine where they will fight the first battle in the new war between Light and Dark. Plotwise you could argue not a lot happens here - Erin and Darin join forces with the deposed crown Prince of Marantine, and journey to his kingdom with the intention of ridding the Dark Church from the city, and restoring the rightful monarch to the throne. However, within this story so much else happens. It's a book of what happens between, between finding out the truth and ending the war. Erin remembers who she is, she remembers the fate of Belfas, Kandor and the warriors who came to kill Stefanos so many centuries ago. Erin blood vows to destroy all that Stefanos built up for the Dark. She says she hates him now, but a part of her misses him. This is really a story where things start coming together. And unlike the previous two books, it has many light moments. Most of which come from the character of Robert/Renar. Though this optimism and hope, is countered by Erin and Darin's more sombre attitudes. Don't become too complacent though, there are still moments in the story that cut like a knife. Two more major characters are introduced as Erin and Darin flee Mordantari. Trethar an old mage who takes Darin on as his student and teaches him how to call the fire that comes from neither the dark, nor the light. And Robert a foppish thief, who is hiding a secret. Indeed, that's a big thing in this book - characters hiding the truth of themselves, keeping secrets, wearing 'masks', and secrets being found out. Just to mention there is a whacking big twist at the end of this story. I almost suspected it, but not quite, so it still had my mouth dropping open. :) It's the sort of twist that makes you want to read the whole book again because you know it's going to alter your perception of events. At the end. Sargoth (the Second) manipulates the First of the Darkness. And soon Erin and Stefanos will meet on the field of battle once more. I almost dread reading Book 4, this hasn't been the sort of series where happy endings are guaranteed. But I so want to know what happens next.

Published by Thriftbooks.com User , 13 years ago
This is book 3 of 4 of the Sundered Series. The first book I read of this authors was Cast in Shadow, which was also wonderful. I then went and found this series, which is absolutely spectacular! This is the most touching, romantic and gripping book I have ever read. The hero Stefanos is brooding, dark and evil(literally), the heroine is brave and fearless. The concept of how love transforms evil and redeems it is compelling. Buy all 4 books- you will devour them over a weekend.
Copyright © 2022 Thriftbooks.com Terms of Use | Privacy Policy | Do Not Sell My Personal Information | Accessibility Statement
ThriftBooks® and the ThriftBooks® logo are registered trademarks of Thrift Books Global, LLC