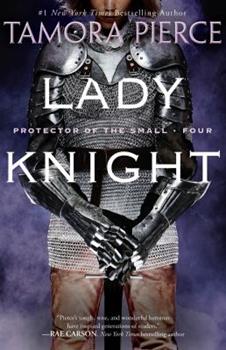 The stunning conclusion to the New York Times bestselling series from the fantasy author who is a legend herself: TAMORA PIERCE. Victory is not always what it seems. Keladry of Mindelan has finally achieved her lifelong dream of becoming a knight--but it's not quite what she imagined. In the midst of a brutal war, Kel has been assigned to oversee a refugee camp. She's sure it's because Lord Wyldon still doesn't see her as equal to the men. Nevertheless,...

Grim, but a strong story

Published by Thriftbooks.com User , 16 years ago
Unlike the majority of the other reviewers, I was very glad that Kel is not married, in love, or betrothed at the close of this story. SHE IS EIGHTEEN! In our society, that's too young to marry. Even Pierce's other heroines were not married at that age-Daine marries between this book and "Trickster's Choice" and Alanna is at least twenty. Also- if you thought that Cleon and Kel would be permanently in love, so did they. I wouldn't know, but my guess is that love and crushes always feel real when they are happening. That was realistic, as was the fact that teen romances do not always survive. Don't usually survive, actually. But a not of midevil realism- nobles did marry for politics, or money, and sometimes it wasn't just power manuvering. Cleon's people would have starved if he hadn't married the heiress his mother picked. I'm not saying it was right for him, but it was realistic in the context of a basically midevil world. I like that Kel is a "commander", too. She is good at it. I coudl beleive her as she sorted out the squabbles and problems of Haven, just as I could beleive her as she fought or bantered with her freinds. I like that Neal is present, as a healer (remember whose squire he was- he definitely learned well from the Lioness) and both he and Kel have great lines. I like Neal espessially- and I like that he marries Yuki, rather than Kel. Their romance isn't visible, but he definitely loves her. His humor and temper (he rants at Kel, basicly with her permission, about the sergeants ignoring convict soldiers' medical problems) are both still there. He is DEFINITELY the same character. In some books where characters reappear, you wonder. I found Kel's relationship with Fanche (a female refugee leader) interesting, espessially because Fanche is definitely a positive character even if she dislikes the heroine. Other minor characters were well drawn- I like Tobe, even if he is virtually invisible. At the end, I found myself worried about Saefas, who is an extremely minor character, because he was wounded as Kel went off to fight the Baddies in Chief. I found myself mourning for some of the "minor" characters who _did_ get killed- Tamora Pierce's world is that real to me. Kel mourns them, too. Lord Wyldon shows a more positive- and more forgiving- side in this book. He gives Kel the refugee camp not to punish her, but because she is honestly the only person who can be trusted with it. He admits that he was wrong to order her not to save her people, and he forgives Kel and Owen for disobeying orders. I loved Kel's love of clerks. Most military-fantasy heroines & heros are contemptuous of beaurucrats. However, they exist, and they are useful, and Kel knows that. Incidentally, I like that in Tamora Pierce's books, the same characters reappear seen through different eyes and seem different- while remaining themselves. Alanna loves Jonathan but knows he has flaws; Daine is completely in awe of him, and Kel dislikes him but is loyal.

Published by Thriftbooks.com User , 19 years ago
Okay, so Kel doesn't have a major romance here, and the ending seems a little flat, but the villain is actually more realistic than most. He's a small man that does big (and terrible) things. Most thugs are. And I think there is still another Kel book in the wings. Pierce has hinted as such, and the way this book ends with so much left unanswered seems to promise more in the future. And to be honest, I find I like Kel more and more the more and more I read. She's a very normal girl. Not in the girl-next-door or everyman way touted by Hollywood, but in the sense that she doesn't have any abilities that a normal girl in our world couldn't have. Not to mention she much more personable than Pierce's characters usually are. We love our loners like Alanna and Daine, but a team player like Kel is a nice change. Being a leader instead of a hero isn't exactly the norm for fantasy genre protaganists, and to have that "Captain of the Gaurds" sort of figure as more than an interesting bit character makes for a more "realistic" feel to the storytelling. While there's still plenty of magic and Tortallian references for us old timers, there's also the feeling that with a few tweaks you could put Kel in the Red Cross and have her refugees be from Eastern Europe rather than Norther Tortall without skipping a beat. Classic Pierce with some fresh twists.

Published by Thriftbooks.com User , 20 years ago
I went to a Tamora Pierce signing in November of 01. At the signing, she gave us a preview of the forth book in the series Protector of the Small. Since then, I have been waiting for Lady Knight to come out. When it did, I bought it right away. I wasn't dissappointed. I think Lady Knight was the second best book in the Kel series (the first being Squire).At last, Keladry of Mindelin has become a knight. As the first lady knight in centuries, she has become well known. Her country is at war with Scanran, a country to the north. Every knight gets an assignment. Kel gets a dud, and she is sure that her old trainging master is trying to keep her safe, but, as Wyldon tells her, she's the onlt one for the job. Manning a refugee camp was not what she wanted to do as a knight, but it's what's she's doing. When the Scanrans attacks her camp when she is away, she is willing to do treason to get them back. They trust her, and she could never let them down. So she sets out at night, alone, and goes after her refugees. On the road the Kings Own catch up to her under Raoul's order. Later on, Owen, Neal and Merric catch up and they start the adventure of their lives togerther.Lady Knight tells little of Kels personal life, but that's understandable; she's busy 24-7. Kel's, unlike all of Tammy's other quartets, quartet ends with her without a suiter. We'll just have to wait and see!

A Good Way to End a Great Series

Published by Thriftbooks.com User , 20 years ago
Throughout the series of Protector of the Small you follow Kel, who is battling her way in an almost exclusive male run buisness (that being war). In the first two books you follow a young girl, who learns that there are times that you must battle to achieve your goals. In the third book, when Kel becomes a squire, you watch her learn the reality of what she has chosen to become. Finally in this last book, you no longer see Kel as a girl, but you see her as a woman who knows her way in the world, and is willing to battle and defy anyone in order to uphold the vows that she chose to take on the other side of the Chamber of Ordeal.This is a powerfull novel that address the problem about doing what is right, verses what everyone else is doing. There are many times through out the story that the main charecter could have done what was popular, instead she chooses the more difficult journey, making you want to cheer and encourage her all the more.There are some people that may be disappointed that this series does not end with a romantic twist, as all of Pierce's other series have. However, I felt that this simply made the charecter even stronger and more realistic. True, you want her to find the right someone, as you wish for all fairy tale happy endings for most of your favorite charecter, but this charecter dosen't need one for you to know that everything will work out all right.One other theme in this series must be discussed. As with all of Pierce's books, the subject and discussion of war is quite strong through out this series. Lady Knight, however introduces the young adult to more then just the deaths that are due to war, it also discusses what happens to civilians during a war. I feel that this is Pierce's third best book to Alanna and Lioness Rampant. Of course, I would encourage readers out there to read any of Pierce's writtings, guranteed, you will enjoy them.

Just What I Was Hoping For

Published by Thriftbooks.com User , 20 years ago
I was waiting for what seemed like years for the fourth and final book of Kel's series to finally come out, and when I got it, I read it in two days. It's a thrilling, gripping ending to an amazing series.Kel has finally gotten her shield, and she's sent with all the knights of the realm to the northern border to fight in the war against Scanra. But she's disappointed when she's put in command of a refugee camp instead of getting to fight and go on her personal quest to find the maker of the horrible machines being sent against Tortall. But she does what she's told, just like the Kel we know.I was very pleased when Tamora Pierce got rid of Cleon, who I didn't like. I missed her usual romance in this book, but it did seem like Kel to not want a lover. Although I'm thinking about Dom...I was also happy to find that all the characters that had seemingly been forgotten in the third book appeared again, like Neal, Owen, and her other year-mates. I loved all the new characters in this book, like Kel's servant boy Tobe, and the refugees she had to take care of. There was a lot of adventure and fighting in this book, but just enough to make you love it. And everything was done in a humorous and realistic way.Kel acted just like herself in this book, which really made up for the mistakes in the third book. This is definitely a worthwhile read. This is my favorite of all of Tamora's series, and she's my favorite author. This is a must-read, and once you pick it up, you can't put it down.
Trustpilot
Copyright © 2022 Thriftbooks.com Terms of Use | Privacy Policy | Do Not Sell or Share My Personal Information | Accessibility Statement
ThriftBooks® and the ThriftBooks® logo are registered trademarks of Thrift Books Global, LLC