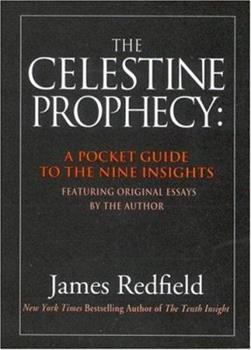 The Celestine Prophecy: A Pocket Guide to the Nine Insights

(Part of the Celestine Prophecy Series)

This description may be from another edition of this product. Now readers can carry the spiritual wonder of the New York Times bestselling The Celestine Prophecy with them and reflect upon the philosophies of James Redfield whenever and wherever they like. This...

A guide for the soul

Published by Thriftbooks.com User , 18 years ago
First in a series of books that guides you to a new spirtual level and gives you the tools for your own spirtial awakinging. Redfield is inspiring and wonderful the passages opened my awarness and gave me new vision. The synchronicity has become like a steady flow of water, everpresent and crystal clear.

Unusual and a must read

Published by Thriftbooks.com User , 20 years ago
I have read it and write out the 9 insights in my notebook. It is very interesting and seem somehow related to my spiritual growth and what I believe in.I like the way how the author defined things like coincidence, higher vibration and love.

You Know A Good Book When It Sparks So Much Controversy!

Published by Thriftbooks.com User , 21 years ago
The Celestine Prophecy,on a personal level,was the beginning of a spiritual epiphany so desperately needed for me . It is "FICTION," therefore people should "NOT" call it blasphemous, & become so defensive, but pay attention to the authors note & description of his writings (where he clarifies this). Try to open your minds wide enough to explore other possibilities, there's nothing to fear, it's totally benign. James Redfield's books refer to spirituality/religion, but I think they're more about a void or a yearning for,an awakening,or a "shift" in consciousness in today's fast paced society. Admittedly & literally, they're fiction, but I've never read another author who can artfully put his subject matter on the cusp of fiction/non-fiction as well as James Redfield (I could envision this concept & story as being as much a reality as any other religous philosophy),so that's probably why people get upset & give negative reviews, but it's an art form, a writer's true gift to be able to master this technique. Redfield creatively articulates elements of adventure, mystery, fantasy, amazing accounts of history in an era when the church had the power that governments presently have,the horrors of our fellow man's potential for cruelty (just as Jesus Christ was persecuted because he was different in Biblical times) , pure poetry, the age old art of story telling , amazing travels, & the benefits of writing journels to document personal & important historical events. James Redfield has become one of my favorite authors, the type that once you pick up his book,it's hard to put it down as there's always some profound revelation going down or action in play.. I've read the following sequels. in succession as they are : 1st)-1993 The Celestine Prophecy An Adventure 2nd)-1996 The Tenth Insight Holding the Vision 3rd)-1997 The Celestine Vision Living the New Spiritual Awareness 4th)-1999 The Secret Of Shambhala In Search of the Eleventh InsightRedfield artfully & articulately spins an intriguing & captivating "yarn" that originates with the disappearance of an ancient Peruvian manuscript that very few Westerners know of it's existence, yet a fearful government wants to suppress it (which we typically hear stories of this type of happenings in today's times). This manuscript is comprised of nine "insights" that for me personally, turn out to bear an uncanny accuracy of what "I" believe is actually occurring in today's society where we watch religous denominations put one another down & witness hypocrisy at it's finest! We are now living in an era of true spiritual restlessness, an awakening (ironically, like being described in the fictional manuscripts which are based on the simplest of theories, coincidence,intuition, synchronicity. In my opinion,this fictional theory has the potential to make as much sense as the Bible or any other religious philosophy. In any event, it makes for an awesome advent

The truth and nothing but

Published by Thriftbooks.com User , 22 years ago
This book has changed my life and many others as well. I truly believe that anyone who reads this book and lives the insights will live a happy life.

Published by Thriftbooks.com User , 22 years ago
I've read the Celestine Prophecy 3 times, and each time I've read it, I gain more insight into my own personal journey. This is also my third copy of it, as I lend it to someone who in turn lends it to someone else. For anyone who is not afraid to be open-minded, and who gets the feeling that there is so much more adventure and wonder to life than what we already know, it's a wonderful way to get in touch with those traces of remembrance we all have, whether we acknowledge them or not. I think most people are afraid because it challenges their existing belief systems. The prophecies do, but through challenge we grow, and if we do not allow ourselves to be open to that growth we may not die, but we may fail to achieve our own full potential. I can't imagine anyone who lives with or without faith not being positively affected by James Redfield's books. I am currently enjoying the 10th insight again and look forward to 11/99 when the 11th is released.
Copyright © 2020 Thriftbooks.com Terms of Use | Privacy Policy | Do Not Sell My Personal Information | Accessibility Statement
ThriftBooks® and the ThriftBooks® logo are registered trademarks of Thrift Books Global, LLC