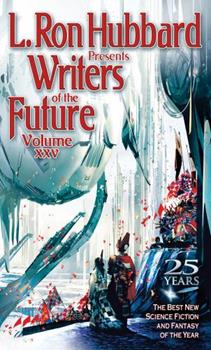 L. Ron Hubbard Presents Writers of the Future Volume 25: The Best New Science Fiction and Fantasy of the Year

(Book #25 in the L. Ron Hubbard Presents Writers of the Future Series)

Embark on Voyages of Imagination and Wonder . Discover the new visionaries of imagination in the Writers of the Future--celebrating 25 years of showcasing the best new talent. Established in 1983 by L. Ron Hubbard expressly for the aspiring writer, Writers of the Future has become the most respected and significant forum for new talent in all aspects of speculative fiction. Never before published first-rate science fiction and fantasy stories selected...

The usual mix of interesting stories

Published by Thriftbooks.com User , 11 years ago
I'm a regular reader of WOTF books, and a contest contributor. I like these because it's a chance to read some new ideas and some new points of view. ...It's a chance, sometimes I see something new and interesting, and I'm very pleased when I do. Here is my assessment of the WOTF 25 crop: Garden of Tian Zi The strong part of this story is its exotic setting, western China. The weak part is the pretty standard story formula. We have evil corporate monopolist types chasing down an entrepreneurial go-getter who is doing his enterprising for the rebels. He has to do his work, raising genetically modified frogs, under cover. It's never clear why being in this remote location is going to offer any safety, and, as the story unfolds, it doesn't. So, it's an action-love-spy story, and not too special from my point of view. The Shadow Man This story has an interesting twist. It takes some contemporary Japanese urban legend -- that the "shadows" of people created by the Hiroshima atomic blast shelter their spirits -- and weaves it into an interesting tale. The tale centers around protagonist conflict with some ho-hum gangster types, but the ending twist is good enough that I liked this one. Life in Steam The setting for this story is exotic -- the firmament is a for-real ceiling, and there are ships that wander from place to place on this ceiling and visit colonies of humans. That's the interesting part. The story part is a science versus religion conflict as told from the point of view of a conflicted Grand Inquisitor, and it's not as exotic. The Assignment of Runner ETI This is yet another death race story. In this case we have young lady cross-country marathon runners who are running to win money for various charities. They run through various obstacles, and betrayals, and... ho-hum. I could not suspend disbelief at the obstacles they encountered, and the twist at the end did not work for me at all. The Candy Store A mix of having the townspeople of nearly ghost town Old West town meeting a Mephistophelian magic wish-giver who sets up a magic candy shop on Main Street overnight. The people of the town are not completely amazed by this turn of events because they pack some magic as well. The story has its moments. Risque Man Risque Man I liked a lot. It's my kind of story because it deals with the ramifications of a new technology. In this case we have some effective computer-aided personal forecasting that works well enough that the government gets interested... and then things get screwed up. Gray Queen Homecoming This one set up an interesting exotic setting that is similar to ones I write about: we have a slower-than-light space ship returning home after an interstellar journey, and a lot of time has passed on the home world. In this case the ship is crewed by only a single person and the ship's computer. When they get home they find their world has completely changed, and not for the better for them. I like the set

I love Writers of the Future - short and sweet!!!

Published by Thriftbooks.com User , 12 years ago
I love Writers of the Future!!! Not just the stories themselves but the purpose behind it. It's the biggest writing and drawing contest in the world for science fiction and fantasy and it's helped new writers and artists internationally in many ways. It's in my view very humanitarian. Most of the stories I really enjoyed in the previous volumes. To be honest, I have not read them all, but this particular volume must be the best so far - volume 25. My favorite in volume 25 is the "The Shadow Man" which is a story based in the orients and the Hiroshima. I would recommend Writers of the Future to anybody because you can get more than one good story in one sitting. It's perfect for reluctant readers, military, aspiring writers and of course anyone that wants good original content. SCT

Best Writers of the Future, I've read yet

Published by Thriftbooks.com User , 12 years ago
Writer's of the Future introduces short stories from new science fiction and fantasy writers. I enjoyed most of the stories, although there was one or two and I didn't care for. Some of the better stories were "Garden's of Tian Zi," "The Shadow Man," The Assignment of Runner ETI," "Gone Black" and "The Farthest Born." It's a great chance to find talented new writer's, some of which will surely have successful and notable careers like Kevin J. Anderson and Robert J. Sawyer, both past winners of the contest.
Copyright © 2020 Thriftbooks.com Terms of Use | Privacy Policy | Do Not Sell My Personal Information | Accessibility Statement
ThriftBooks® and the ThriftBooks® logo are registered trademarks of Thrift Books Global, LLC