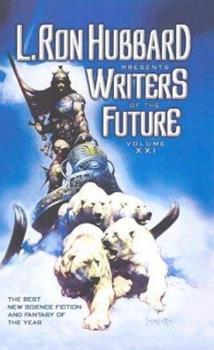 Writers of the Future

(Book #21 in the L. Ron Hubbard Presents Writers of the Future Series)

This description may be from another edition of this product. The L. Ron Hubbard Presents Writers and Illustrators of the Future Contests discover and introduce the very best new talent in science fiction, fantasy and horror, with their entertaining and creative...

Published by Thriftbooks.com User , 16 years ago
The only modern science fiction and fantasy short stories that I read are in the magazine "Realms of Fantasy." Thus, when my brother gave me this book I was a little reluctant to read it. However, the title sounded encouraging and I wondered why my brother picked this up, so in I jumped, and I was pleased with what I saw. John Schoffstall's writing in "In the Flue" contains far too many details (e.g., he writes about hover tanks; details are interesting, but detract from the focus of the story). However, the story contained two very interesting elements: the story of the power generating flues and a philosophical element. I found the former very interesting and the second thought provoking. M.T. Reitan's story "Needle Child" is a fantasy that creates a world of populated hedges surrounding meadows. Reitan properly minimizes any explanation of why it all exists, focusing on one event in this existing world. This story begs for a novel to explain it all. His story follows a hedge person providing a stolen baby to another couple in a meadow. The concept is quite bizarre. In "The Story of His Life," author David W. Goldman introduces a reality where artificial intelligences control what happens in people's lives, but suddenly a player learns there may be something more. This story is another one that begs for a novel. There is a short essay by L. Ron Hubbard, whose legacy makes the "Writers of the Future" series possible, titled "Introducing Tomorrow's Miracles." The story "Green Angel" by Sean A. Tinsley I found a little too esoteric for my taste. The story was almost as much fantasy as science fiction and I found some of the imagery, particularly at the end, difficult to follow. Here two machines battle over eggs on the hostile surface of Titan. In "The Firebird," author Andrew Gudgel writes a modern fairy tale rooted in science fiction that leads to all sorts of horrific possibilities. Thinking about the possibilities as the story ended sent shivers down my spine. "My Daughter, the Martian," by Sidra M.S. Vitale contains classic science fiction elements as it tells the story of the head of a Martian colony and her daughter and the events surrounding meeting a supply ship. For some reason I intuited the ending to "Meeting the Sculptor" by Floris M. Kleijne near the beginning. What happens if there are people who change the past in nearly meaningless ways, unless it is your past being changed? Even though I inadvertently guessed the ending I found the story interesting. Another essay by Nina Kiriki Hoffman provides "Seven Keys to Writing Success." The title is self-explanatory. Ken Scholes penned the fantasy "Into the Blank Where Life is Hurled." It appears that the afterlife is more complex than we ever imagined. The science fiction story "Mars Hath no Fury like Pixel Double-Crossed" was an excellent story and pulled me in immediately. I read this story very quickly because it was styled classically, with all the most m
Copyright © 2020 Thriftbooks.com Terms of Use | Privacy Policy | Do Not Sell My Personal Information | Accessibility Statement
ThriftBooks® and the ThriftBooks® logo are registered trademarks of Thrift Books Global, LLC