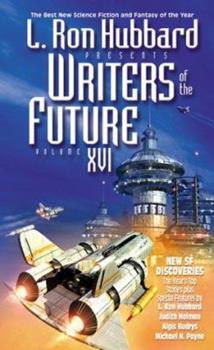 (Book #16 in the L. Ron Hubbard Presents Writers of the Future Series)

This description may be from another edition of this product. Twenty-five years ago, L. Ron Hubbard created and endowed the Writers of the Future Contest "as a means for new and budding writers to have a chance for their creative efforts to be seen and...

The usual galaxy of rising stars

Published by Thriftbooks.com User , 15 years ago
This is the sixteenth annual anthology produced by the Writers of the Future competition, in which new fiction writers compete for significant cash prizes and publication herein. This is the 2000 edition and, like the fifteen volumes before it, it is a collection of genuinely new voices and perspectives, some of whom will be heard from again, and some of whom have already made their mark since this anthology was published. As with previous volumes, the stories (and the essays on the craft by more experienced writers, which are interspersed throughout every volume) rarely disappoint; and the contest itself deserves applause for providing a way for a few new writers to break into print in a increasingly competitive field. The contents this year are: "Home Grown" by William Brown: A wealthy man with an estate full of artificial life forms receives his comeuppance. "Like Iron Unicorns" by Paul D. Batteiger: A soldier on leave from a Martian war visits a Civil War battlefield as a favor to a friend and must deal with the historical past as well as his own. "Atlantis, Ohio" by Mark Siegel: A newly-discovered intelligent Earth species has been imprisoned in one place for millennia, and they see the humans who discovered them as their ticket out, whatever the cost. "Search for Research" by L. Ron Hubbard: Hubbard discusses how to broaden one's horizons and mine subject matter for as many stories as possible. "A Conversation With Schliegelman" by Dan Barlow: Absolutely hilarious discussion about the time machine that has appeared in Schliegelman's study, its possible origins and potential implications. The best story in this volume, in my opinion. "In Orbite Medievali" by Toby Buckell: Wild tale of Columbus and his men, who have made a grievous miscalculation regarding the shape of the earth. "Guildmaster" by Dan Dyson: After the collapse of civilization, industry must be rebuilt from the ground up. Ends very abruptly, but the plot is secondary to the more interesting evolution of the characters and institutions over time. "An Essay on Art" by Judith Holman: A discussion of the life of an artist, its inspirations, distractions, and rewards. "Skin Song" by Melissa J. Yuan-Innes: A medical student has a must live with a psychically-elevated sense of touch. "As the Crow Flies" by Leslie Claire Walker: A ghost doesn't haunt a place for its own sake; it's waiting for something, even if it doesn't know what. "Mud and Salt" by Michael J. Jasper: A group of hunters stalk anescaped alien through the woods. "The Basic Basics of Writing" by Algis Budrys: The master takes us through his version of the steps of writing a good story. "The Quality of Wetness" by Ilsa J. Bick: Allegory in which a woman goes to prison for her relationship with a synthetic human created for slave labor. The religious element of the dominant culture is a little heavy-handed, but the story's not bad otherwise. "Your Own Hope" by Paul E. Martens: The most annoyingly likable person in th

Published by Thriftbooks.com User , 18 years ago
If you are thinking that this is just a collection of stories from the Writers of the Future contest, then you are mistaken. As the cover indicates, there are 13 stories plus 4 essays that are included in this almost 500 page book. As we'd expect from a contest under Hubbard's name, one of the essays is by him. The 13 stories are quite varied and I won't repeat the brief introduction to the plots done by another reviewer. I liked 4 pieces enough to consider finding other writing by their authors. "Home Grown" by William Brown, "Like Iron Unicorns" by Paul D. Batteiger, "Guildmaster" by Dan Dysan, and "The Quality of Wetness" by Ilsa J. Bick. I thought these storylines were original but the characters were familiar enough to really hook me. "Atlantis Ohio" by Mark Siegel was a cool idea but the story just goes on and one far too long. So if you like hard science fiction, social fiction, or alternative pasts or presents, there is some story in here you may enjoy. So why only 4 stars? Frankly I think the essays could be left out, the price dropped a bit on the book, and it would be a much better buy overall. People who want insight into the craft or writing and direction toward publication can get a book geared toward that.

Published by Thriftbooks.com User , 21 years ago
What I like best about this annual antho is the diversity of the stories. Many anthologies stick to only one genre, or even one sub-genre, like Hard SF or Historical Fantasy. The "WotF" books always run the gamut, and this year is no exception. Each story packs a wallop and sticks in the reader's mind for days to come.My personal favorites were:William Brown's "Home Grown" - a Bradbury-esque, near-future tale about a robotic butler who has the glimmer of emotion, especially for the beautiful Dryad in the garden outside.Toby Buckell's "In Orbite Mediavil" - An alternate history/fantasy of Columbus' ships taking a crack at an earth that's not quite flat, but not exactly round, either.Michael Jasper's "Mud and Salt" - A near-future story of three men hunting an alien, it deals unflinchingly with a young man's first contact with an alien. The changes that meeting brings about are subtle, yet well-done.Melissa Yuan-Innes' "Skin Song" - A deft fantasy edging on horror about a med student who can hear "songs" from simply touching the skin of others. The story gets really interesting when the med student enters the cadaver lab...Leslie Walker's "As the Crow Flies" - A lyrical ghost story that forces the reader to figure out the rules as he or she reads. Nicely done.Jeff Rutherford's "Daimon! Daimon!" - A classic horror story of demons and blues music, made even better by its historical context and swamp setting.Other highlights include Gary Murphy's hard SF tale "Pulling Up Roots," Dan Barlow's time travel/comedy "A Conversation with Schliegelman," and Paul Martens' darkly humorous science fiction story "Your Own Hope." The collection also contains three longer novellas, "Atlantis, Ohio" by Mark Siegel, "Guildmaster" by Dan Dysan, and "The Quality of Wetness" by Ilsa Bick.Contest rules are also included at the end of the book. I recommend any new writer sending their stories to the contest -- the diversity and the range of the stories make this anthology one to watch for, and the writers in this year's collection will definitely be names we'll all hear from again!

Published by Thriftbooks.com User , 21 years ago
The four first place stories alone were worth the price of the book. They were highly creative and fascinating. Easy to believe these authors will be well-known in the SF/F field soon enough.

the future? i hope so!

Published by Thriftbooks.com User , 21 years ago
the only thing these stories have in common is that they're all good. the volume really spans the gamut from fantasy to hard sf, action-adventure to mind-bending logical teasers. there really are no weak stories in this collection.
Copyright © 2020 Thriftbooks.com Terms of Use | Privacy Policy | Do Not Sell My Personal Information | Accessibility Statement
ThriftBooks® and the ThriftBooks® logo are registered trademarks of Thrift Books Global, LLC