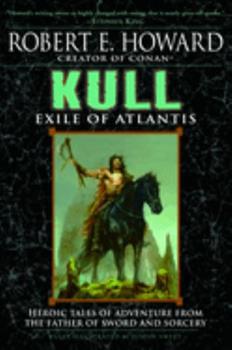 (Book #2 in the The Robert E. Howard Library Series)

In a meteoric career that spanned a mere twelve years, Robert E. Howard single-handedly invented the genre that came to be called sword and sorcery. From his fertile imagination sprang some of fiction's most enduring heroes. Yet while Conan is indisputably Howard's greatest creation, it was in his earlier sequence of tales featuring Kull, a fearless warrior with the brooding intellect of a philosopher, that Howard began to develop the distinctive...

Published by Thriftbooks.com User , 13 years ago
REH lived from 1906-1936 and lived most of his life in Cross Plains, TX. He was a genius and visionary. From the back of book: "Robert E. Howard had a gritty, vibrant style--broadsword writing that cut its way to the heart, with heroes who are truly larger than life." - David Gemmell In a meteoric career that spanned a mere twelve years, Robert E. Howard single-handedly invented the genre that came to be called sword and sorcery. From his fertile imagination sprang some of fiction's most enduring heroes. Yet while Conan is indisputable Howard's greatest creation, it was in his earlier sequence of tales featuring Kull, a fearless warrior with the brooking intellect of a hilosopher, that Howard began to develop the distinctive themes, and the richly evocative blend of history and mythology, that would distinguish his later tales of the Hyborian Age. Much more than simply the prototype for Conan, Kull is a fascinating character in his own right: an exile from fabled Atlantis who wins the crown of Valusia, only to find it as much a burden as a prize. This groundbreaking collection, lavishly illustrated by award-winning artist Justin Sweet, gathers together all Howard's stories featuring Kull, from Kull's first published appearance, in "The Shadow Kingdom," to "Kings of the Night," Howard's last tale featuring the cerebral swordsman. The stories are presented just as Howard wrote them, with all sugsequent editorial emendations removed. Also, included are previously unpublished stories, drafts, and fragments, plus extensive notes on the tests, an introduction by Howard authority Steve Tompkins, and an essay by noted editor Patrice Louinet. "Howard was a true storyteller-one of the first, and certainly among the best, you'll find in heroic fantasy. If you're never read him before you're in for a real treat." -Charles De Lint "For stark, living fear...what other writer is even in the running with Robert E. Howard?"--H.P. Lovecraft. Other books to read are: One Who Walked Alone by Novalyne Price and DVD The Whole Wide World about Novalyne Price who was REH's girlfriend the last few years of his life. This movie on DVD stars Renee Zellweger and Vincent D'Onofrio as REH. Outstanding books are Blood & Thunder, The Life & Art of REH by Mark Finn, The Last of the Trunk, The Never Ending Hunt, and all Weird Works by Paul Herman, Selected Letters of REH Vol 1-3 and Poetry by Rob Roehm, Two-Gun Bob, and The Black Stranger & Other American Tales which has the scariest story Pigeons From Hell better than Poe and Hitchcock. There are so many. Check out the REH Foundation and Forum!

Published by Thriftbooks.com User , 14 years ago
If you enjoy Robert E. Howard's Conan series then you will truly enjoy this book. It is written in they same style as the Conan novels. A story of a barbarian king trying to maintain his hold on a decadent kingdom filled with enemies whose only wish is to overthrow him. An added feature to this book is the excellent artwork that fills it's interior. It is a fantastically illustrated work that I am proud to have in my library.
Copyright © 2020 Thriftbooks.com Terms of Use | Privacy Policy | Do Not Sell My Personal Information | Accessibility Statement
ThriftBooks® and the ThriftBooks® logo are registered trademarks of Thrift Books Global, LLC