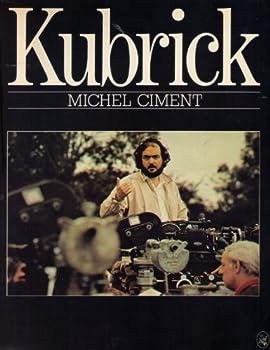 The classic study of Kubrick--available once again and fully updated If Stanley Kubrick had made only 2001: A Space Odyssey or Dr. Strangelove, his cinematic legacy would have been assured. But from... This description may be from another edition of this product.

Published by Thriftbooks.com User , 19 years ago
This book has been held in high regard ever since it first appeared. Earlier editions were becoming collectible and were always disappearing from libraries. I guess it was safe for a reappearance following the passing of Stanley Kubrick and the completion of his body of work. The book has been reworked beautifully, including all of the amazing color photos, essays, and interviews from before plus some new additions, namely chapters on Full Metal Jacket and Eyes Wide Shut chapters. There are additional interviews with various collaborators. In short, in the wake of Kubrick books that sprouted up following the director's death in 1999, Ciment's Kubrick ranks right at the top. It's a gorgeous volume, and the interviews (done by Ciment following Clockwork Orange, Barry Lyndon, and The Shining) are some of the most enlightening words from the director. Highly recommended for the Kubrick fan and the film buff. Also recommended is Thomas Allen Nelson's Kubrick: Inside a Film Artist's Maze.

Published by Thriftbooks.com User , 21 years ago
I am glad Mr. Ciment waited until Kubrick's oeuvre was completed before updating what is, indeed, the very last word on this very unique artist's films. Everything is here from the first edition which was out-of-print for quite awhile plus the films that were made after. With Stanley Kubrick's death we now have the very best study of the themes, techniques and recurring visions of a very singular artist. Anyone who wants to understand the evolution of Stanley Kubrick can disregard all the other flawed books out there and put this one on the shelf as a keeper. With detailed analysis and tons of pictures, any serious fan of his films will appreciate this as only the subtitle says it is - the definitive edition.

Most precious visual book about Kubrick.

Published by Thriftbooks.com User , 21 years ago
I have this book. 5,6 years ago, I bought this at second hand book store. So book I have is second handed one, and Japanese special edition. As other reviewers say, it's very very great pity that this book is out of print now. I think some publisher had better make new edition title, added to a visualy wondeful film-Eyes Wide Shut!! If you have found it at bookstore and you are a Kubrician, you must take it, buy it, bring it your home, and enjoy these so many precious fotos or very important his interviews in this book. I have various books about Kubrick, but this Michel Ciment's Kubrick is the best book in published ones ever I think. Do your best for finding one!! All your efforts for this book would not be wasted, EVER!

Published by Thriftbooks.com User , 23 years ago
...it was typical 'printed in USA' quality...the color photos looked pale, and the binding started to come apart...hopefully the new, revised edition of this book- now out in France, and up to date with EWS, will be here soon, and printed in HK or Japan...

Published by Thriftbooks.com User , 23 years ago
Beyond essential. A wonderful and beautiful book full of great photos of all Kubrick's films up to "The Shining." There is a cool photo of Peter Sellers in Dr. Strangelove costume, standing alone in the war-room; very noir. Another great photo from "The Shining" set of Kubrick seated w/ Danny Lloyd in one arm, as they watch some daily rushes. Hope this rare book comes back into print, so more people can get a chance to check it out. I picked-up two copies of this hardcover book at a garage sale recently along with a very mint "Shining" soundtrack album. Great book, hope you can find it.
Trustpilot
Copyright © 2022 Thriftbooks.com Terms of Use | Privacy Policy | Do Not Sell or Share My Personal Information | Accessibility Statement
ThriftBooks® and the ThriftBooks® logo are registered trademarks of Thrift Books Global, LLC