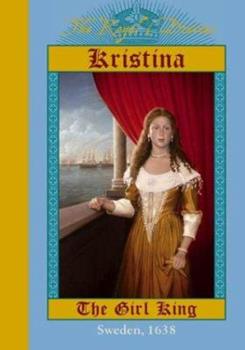 (Part of the The Royal Diaries Series)

Carolyn Meyer, author of best-selling ROYAL DIARIES Isabel and Anastasia, now brings to the series this compelling story of Kristina, The Girl King, from 17th-century Sweden. Upon discovering that their newborn infant was, in fact, female and not male as first thought, Queen Marie Eleonore wailed inconsolably and King Gustavus Adolphus declared, nevertheless, that the child be raised as a prince. At age six, upon the death of her father, the child...

Published by Thriftbooks.com User , 16 years ago
This book is really, really good.I really enjoyed it.This book is about Kristina,princess of Sweden.Kristina is a strong-minded character in this book who wants to follow the moral of Queen Elizabeth,to never marry.Kristina,though a girl enjoys the life of a boy.After one of her friend's death.Kristina's life turns upside-down and is puzzled at her friend's attraction towards her.This book is one of a kind and one of the best Royal Diary Books.It's as interesting and creative as Kazunomiya,the best royal Diary book yet.I strongly reccomend this book.It unlike 'The Lady Of Palenque' has strong characters that you feel friendly with and will soon love.Some of the parts in this book are about the politics in Sweden and those parts are very interesting.Also parts in this book are touching and sad.You may not be able to get this book but try hard to get it.It's good!I couldn't put it down.

Kristina, The Girl King A+

Published by Thriftbooks.com User , 18 years ago
Kristina, daughter of King Gustav II of Sweden, is a different and fun look into a little known figure. Being the only child of King Gustav, she has been brought up under male customs so she may become Sweden's next king. Taking place during the half way mark where she will become king, we learn many things in this book. We learn about her crazy and eccentric mother. We can also see the many male habits she has been brought up with. Throughout the book we question, why is she like this? Has she been brainwashed? Kristina, The Girl King will lead you on a great path. I promise you won't want to put it down. Although the first few pages are a bit boring, continue reading because the rest of the book is great.

The girl that was determined to be "King"

Published by Thriftbooks.com User , 18 years ago
From the moment Kristina was born she was the disappointment of her mother. The astrologers had all predicted that she would be the long awaited heir of her father, King of Sweden, but instead she was a girl. For weeks her mother's court were too afraid to inform the King that the "boy" was indeed a girl and the whole Kingdom of Sweden rejoiced, ignorant to the truth. When finally the truth came out the King surprised all by declaring the girl a prince and raised her like a boy that he would never have. He was determined for Kristina to become King, not Queen. When her father died during battle, the young Kristina, then six, was declared the rule ruler of Sweden, and upon turning eighteen she would become King. When the story dawns on us, the young Kristina is eleven and can't wait until the day she will finally be able to rule without her father's council. Her days are monotonous, except for the occasional nightmares that have plagued her since her father's unfortunate death. She lives with her Aunt, and receives the education of a prince, but her thoughts are alway lingering to her mother, the women she disappointed so much at birth, who is broken after her father's death. Talks of marriage ensue, but the headstrong Kristina will have none of it, for her dream is to rule like Elizabeth, the Virgin Queen of England.

The Princess Born To Be King

Published by Thriftbooks.com User , 18 years ago
Gustav and Maria Eleanor, the king and queen or Sweden, always wanted a child. What they got after many miscarriages, was Kristina. Maria wailed and keened, but Gustav praised his daughter. Gustav died only 6 years later, leaving his daughter as the KING of Sweden under many regents. Maria hated her daughter (she had mental illnesses that caused her to lveo and hate her daughter on and off)and after attempts on her life, Kristina was sent to live in Stockholm at the Castle of the Three Crowns with her beloved Aunt Katarina. When we meet 11 year old Kristina Vasa, the KING of Sweden, she is sitting by her window at the Castle of the Three Crowns in Stockholm, Sweden, writing in the small book given to her by her Aunt Katarina to record her thoughts and feelings. Over the next year and a half, we watch as young Kristina matures into a young woman (although she becomes more masculine everyday)and we witness her lessons in languages, military tactics, astronomy, history, etc. and her many (MANY) troubles: her insane mother, her frequent nightmares, memories of deaths and attempts on her life, and of course the constant nagging by her tutors and regents to marry. However, Kristina does not wnat to marry for she wants to become KING, as her father intended her to be. The diary greatly describes life in the Swedish court, the fashions, the arts, and the great people of the time. This diary reveals the Kristina most people ignore: not the very masculine woman who gave up her throne to parade around Europe dressed as a man on a white stallion and for Catholicism, but the young misunderstood princess who was alone in the world and had a very difficult childhood as she prepared for her greatest role: to be crowned king of Sweden. We end our journey with Kristina seeing how much she has matured when Kristina is presented before the Rad ( a group put together to quiz Kristina on her studies and preperations) and informs the men that (Kristina's mother had recently escaped Sweden to live in the enemy of Sweden's, Denmark, land and to mingle with the Danish king which showed treason and disloyalty to Sweden)she is going to support her mother now living in debt in Denmark with her own money. This act shows her regent, Axel Oxensteirna (who has only ever referred to Kristina as queen, not king)that Kristina is truly a wonderful and skilled young girl who will one day be a great KING of Sweden. I truly enjoyed this book and thought it was one of the best of the Royal Diaries, next to Carolyn Meyer's other Royal Diaries (Anastasia and Isabel)and Kathryn Lasky's. All fans of the series will enjoy this popular woman's story and leave with the notion of the feminist movement Kristina started so that women could be where they are today. Kristina should be a role model for all girls and if you ever see this book, be sure to pick it up, for despite the diary is short compared to others in the series at a mere 135 pages (epilgoue, historical note, photos, and family tree

A good new book from the Royal Diaries series.

Published by Thriftbooks.com User , 18 years ago
Before Kristina was born, her parents, King Gustav II Adolf of Sweden and his wife Maria Eleonora, had tried for years to have a child that survived. While her mother was pregnant with her, astrologers predicted Kristina would be a boy. Kristina's mother wept with disappointment upon discovering that her newborn infant was female, but her father declared his daughter would be as good as any boy. And when no more children were born to her parents and her father died when Kristina was just six, she inherited the throne of Sweden. Now eleven years old and waiting for the day when she will be old enough to rule on her own, Kristina begins a diary on Midsummer Day, 1638. She describes her education, which is that of a boy, as well as holidays and festivals and her difficult relationship with her mother. I highly recommend this book to all fans of The Royal Diaries series. It brings to life the story of Kristina, a lesser-known royal whose life was fascinating. I also loved the unique setting. I truly enjoyed learning about a place and time I knew nothing about.
Copyright © 2020 Thriftbooks.com Terms of Use | Privacy Policy | Do Not Sell My Personal Information | Accessibility Statement
ThriftBooks® and the ThriftBooks® logo are registered trademarks of Thrift Books Global, LLC