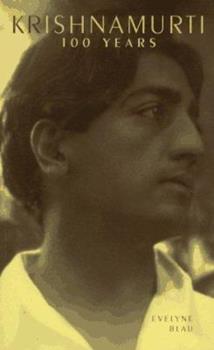 First published on the centennial of his birth in 1995, this is the story of Krishnamurti, told through his earliest letters and diaries to his last works. The 125 photographs bring into focus the man, the people he knew and the times in which he lived. Included are personal recollections from others who knew this remarkable man.

Krishnamurti: The Essence of Clarity

Published by Thriftbooks.com User , 12 years ago
Encountering Krishnamurti's words has enlivened tens of thousands of lives around the globe, including mine. For those who want to boldly be resurrected from the toxic quagmire of cliched perceptions of life "Krishnamurti 100 Years" by Evelyne Blau is your life saver. I strongly advise that if you are not courageous enough to see "what is" keep away from Krishnamurti. If you are willing, then know that the alteration of your awareness that ensues will reduce stress, increase energy and unfold the beauties of life that were absent because of the mind's ego indulgences. Krishnamurti did not tolerate perceptual blindness as a permissable human indulgence. He was about urging human beings of a need for a quantum leap in evolution that we have to achieve regardless of massive media and corporate efforts to dumb us down. In browsing through "Krishnamurti 100 Years" an aura of serenity permeates the photos on the pages. Reading the highlighted excerpts on the pages of the book immediately sensitizes the Inner Self to the presence of spiritual food. Those of a philosophical bent will have their interest piqued by finding numerous famous modern day philosophers anxiously awaited Krishnamurti's discourses. Ms. Blau was a close friend of this great man and presents his life with immense intimacy. Krishnamurti spoke to our souls. He was unshakeable in emphasizing the importance of mental and spiritual clarity. This book is a collector's item worthy of commemoration of Krishnamurti who was held in the greatest esteem by such luminaries as the Dali Lama, Joseph Campbell, and George Bernard Shaw to name a few. This book is excellent for those newly exposed to Krishnamurti as well as long time admirers. Krishnamurti died on February 17th, 1986, but he will radiate brightly in your life if you purchase, read and implement the book's messages into your life. May GOD bless abundantly Krishnamurti and all who love him. Sincerely, Shadeed R. Ahmad (3-21-10)

Published by Thriftbooks.com User , 12 years ago
An observation by Krishnamurti (1929): 'Truth is a pathless land'. Man cannot come to it through any organization, through any creed, through any dogma, priest or ritual, nor through any philosophical knowledge or psychological technique. He has to find it through the mirror of relationship, through the understanding of the contents of his own mind, through observation, and not through intellectual analysis or introspective dissection. Man has built in himself images as a sense of security--religious, political, personal. These manifest as symbols, ideas, beliefs. The burden of these dominates man's thinking, relationships and his daily life. These are the causes of our problems for they divide man from man in every relationship." And a parable: "You may remember the story of how the devil and a friend of his were walking down the street, when they saw ahead of them a man stoop down and pick up something from the ground, look at it, and put it away in his pocket. The friend said to the devil, 'What did that man pick up?' 'He picked up a piece of the truth,' said the devil. 'That is a very bad business for you, then,' said his friend. 'Oh, not at all,' the devil replied, 'I am going to help him organize it.' I maintain that truth is a pathless land, and you cannot approach it by any path whatsoever, by any religion, by any sect. That is my point of view, and I adhere to that absolutely and unconditionally. Truth, being limitless, unconditioned, unapproachable by any path whatsoever, cannot be organized; nor should any organization be formed to lead or coerce people along a particular path."

A Spell-Binding Biography of a Most Remarkable Man

Published by Thriftbooks.com User , 20 years ago
This story of Krishanurti's life is the most fascinating and complete biography I have ever read. It certainly helps that the book begins with intriguing accounts of Krishnamurti's unusual childhood, in which he was "found" by the Theosophical Society. ... "Leadbetter suddenly noticed one of the boys, outwardly a rather skinny looking little boy with a shaved front to his head and a pigtail. He was about thirteen (actually fourteen but appeared much younger), and had a little brother with him. He saw that around this boy was an aura of such brightness and glory as he said no one else in Adyar had, and that was so outstanding to him that he at once made friends with the two brothers." Thus begins a most unusual relationship between the very young Krishnamurti and the Theosophical Society (Annie Besant was appointed guardian of Krishnamurti and his beloved younger brother one year later, in 1910. There were many advantages and disadvantages to the transformed life Krishnamurti led, and this book covers all the most interesting facets of Krishnamurti's life with beautiful photographs, hand-written journal entries, and interviews with Krishnamurti and other great thinkers of his time. This is the story of a man devoted to giving spiritual teachings -- a man who inspired many (including Bruce Lee, Van Morrison, Henry Miller, Deepak Chopra, and Joseph Campbell) with his tremendous wisdom and clarity. Many of Krishnamurti's thoughts and quotes are included, such as, "In yourself lies the whole world, and if you know how to look and learn, then the door is there and the key is in your hand. Nobody on earth can give you either that key or the door to open except yourself." I highly recommend this book, both for its exquisite attention to the details and big picture of Krishnamurti's life, and for the inspirational wisdom it imparts to the reader.

The man was his teaching

Published by Thriftbooks.com User , 21 years ago
I first came across this book in a library and borrowed it, and the impression I got, sustained for 3 years to make me actually buy it. As Krishnaji would say, the only way of understanding and discovering your self is through the mirror of relationship, what better way of understanding Krishnaji than through the way he interacted with people from different parts of the world and with different perspectives? That said, Krishnaji still remains a mystery as he rightly should, but nevertheless a delightful mystery.....

Published by Thriftbooks.com User , 23 years ago
Krishnamurti, although interesting and intriguing, is not known for his entertainment value. He was as austere and uncompromising as he was fascinating. This book is entertaining, and interesting, and intriguing, and fascinating. It is my educated guess that Krishnamurti's teachings will become more well known in the years to come. Much more well known. This book is an excellent introduction to his teaching as well as a supplement to his actual wealth of books. What other book offers an invitation to what it means to being really aware and seeing truth, and also shares anecdotes of the like of which Krishnamuti is on a picnic with Charlie Chaplin, Paulette Goddard, and Aldous Huxley, to name a few. This book is a wonderful gem, full of insight. Absolutely enlightening.
Trustpilot
Copyright © 2022 Thriftbooks.com Terms of Use | Privacy Policy | Do Not Sell My Personal Information | Accessibility Statement
ThriftBooks® and the ThriftBooks® logo are registered trademarks of Thrift Books Global, LLC