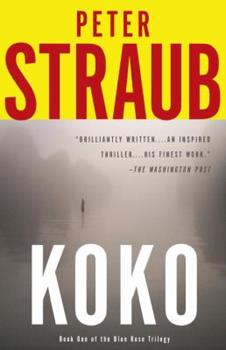 Bestselling author Peter Straub's Koko is a gripping psychological thriller in which horror and paranoia are indistinguishable from reality. Koko . Only four men knew what it meant. Now they must stop it. They were Vietnam vets-a doctor, a lawyer, a working stiff, and a writer. Very different from each other, they are nonetheless linked by a shared history and a single shattering secret. Now, they have been reunited and are about to embark on a quest...

Published by Catherine A. , 3 months ago
When I read the reviews, I thought I was really going to like this book. A mystery set in Vietnam during the war, it moves back and forth between the present and the past. The problem I have with the book is the way it's written. Something about the writer's style is off-putting. When describing action scenes it's so clumsy and overwrought. I found myself skimming through some of it. It seems as if too many words are being used in order to lengthen the book. I didn't like the grisly detailed descriptions of extreme violence. The violence is necessary to the plot, but it didn't have to be done so disturbingly. And I really disliked the old trope of the crazy killer Vietnam vet, especially as we are a military family. I ordered the other two books in this trilogy, Mystery and The Throat, based on reviews. I hope they are better than this one.

Published by Thriftbooks.com User , 16 years ago
Koko is an excellent adventure mystery.The author's prose is clean-cut without giving the appearance of having suffered undue compaction.It's very scarry and begs multiple, repeat readings.I don't remember anything better by Peter Straub.

What happened to the editor review?

Published by Thriftbooks.com User , 16 years ago
First of all, I want to say I don't know what's up with the editor's review of this book. That's not even a review of the right book. This book is about an old platoon of men that had been together in the Vietnam war that get together, minus a few. ANd they have reason to beleive that one of them is a murderer. This is a wonderful mystery novel that will have you guessing the entire way through. I can't get over how great Peter Straub is at writing this kind of novel. It's not like all that other murder mystery crap out there. This is something that connects you so much with the past of these poeple that you actually...I don't know how to put it...feel them. It's not a story where the point is to just catch the killer and game over. This is a story where the characters are directly linked to the person they are trying to find, emotionally, sociologically, and almost spiritually. The suspense is amazing, especially at the end. People thought it was rushed, but I thought it gave the book a nice sort of feel. I actually think it would have been predictable any other way. And there is so much under the surface of this book than what it's trying to say. First off, Maggie, Lah, what was the metaphor Straub was trying to get across when he describes her as looking like a young girl, but all the men in the story are attracted to her? There's just a lot of little stuff like that in this book you have to pick up. Definately not a shallow murder mystery. Iris Joe Hansen, eat your heart out.

Published by Thriftbooks.com User , 16 years ago
Peter Straub has raised himself, in my estimation, from good genre writer to author of excellent fiction with his novel "Koko." This is no light, scary beach read. "Koko" is a complex tale of a group of men who travel to hell and return with demons. It is a psychological suspense thriller that took my breath away. Straub's "Vietnam book" is far different from any other I have read. He didn't have to look far to discover evil monsters with which to terrify his readers. He was able to find them within the minds of his characters, men who served together in Vietnam. At the same time he was able to build a tremendous sense of sympathy towards his characters - those who fought for their country and returned far different men than they started out to be. I am of an age where I can recall the boys, my fellow high school grads, who went off to the Far East. This novel triggered the feelings of sorrow and loss I felt for those who never returned...and for those who did. Years after the end of the Vietnam War, four members of the same platoon meet in Washington, D.C., for the unveiling of the Vietnam War Memorial. Four men from totally different backgrounds, who chose different paths in life, Dr. Michael Pool, pediatrician; Harry "Beans" Beevers, the "Lost Boss, the world's worst lieutenant" - a lawyer; Tina Pumo, Pumo the Puma, whom Underhill had called Lady Pumo - a NYC restaurateur; and wild little Conor Linklater, a skilled carpenter." These men are supposedly the only survivors of their platoon. They all bonded, once, in the brotherhood of combat. They closed rank throughout the traumatic period when members of their group were accused of committing My Lai-level atrocities in a little village called Ia Thuc. Now they will re-forge their ties to look for another platoon member - one whom they thought long dead - a probable murderer. A series of brutal, seemingly random slayings have been committed in the Far East. The victims were all foreigners - American, British, French. A calling card was left behind at each crime scene, leading the vets to believe that the killer was one of their own - an ex-soldier known as Koko. The four travel together, once again, to Singapore and then Bangkok in search of a an elusive and wily ghost from the past. Their pursuit becomes, in a sense, a last mission, an opportunity for closure. And it is also a time-out from their daily lives - a chance to evaluate and contemplate change. For their own purposes they are determined to catch-up with Koko before the police do. I was riveted to the page with "Koko." Peter Straub has created some of the most phenomenal, realistic, and fully realized characters I have met on the written page. They are indeed a complex bunch of folk, especially the killer. The narrative is richly textured - beautifully written. At time I would pause and read descriptions over again, just for the pleasure of doing so and visualizing the scene in my mind's eye. And the story resonates long after the n

The Vietnam war as never seen before

Published by Thriftbooks.com User , 19 years ago
Koko is a great novel. A group of very different people with the common misfortune of having served in Vietnam together try to find and apprehend man from their old platoon who they suspect is responsible for a series of murders. Before reading it I never had any interest in the events in Vietnam. But now I want to learn more about it. The story was good. The idea of a group of war vets who don't neccessarily like each other cooperateing for a greater purpose is a fascinating concept. The twists and turns in the plot keep the novel going strong throughout most of its entirety. Only most though. Even though it has interesting plot twists, the going door to door questioning strangers bit gets a little old. Overall this is a must read novel.

the best serial killer thriller you are likely to encounter

Published by Thriftbooks.com User , 21 years ago
I can count the books I've felt the urge to read twice on one hand...Koko is one of the elite few. Vietnam vets go in search of a man from their old unit after hearing about a series of murders in the Far East. Koko is a well-written, terrifying journey into the lower depths of hell on earth. Be warned, this book does start off rather slow(I almost didn't keep going), but the rewards are more than worth your perseverance. It was released the same year as Silence Of The Lambs...it is a superior novel. The shared Vietnam experience of the main characters gives this book a believability that is absent in many thrillers. This is the first, and best, entry of a trilogy that includes Mystery & The Throat. I have turned my mother, old girlfriends, and other friends on to this experience. They all thanked me afterwords. You will too. I was eighteen the first time I read this. I was twenty-five the second time. Nothing was lost, it was even better the second time. This is a mature adventure through a nightmare psychological landscape. Do yourself a favor...READ KOKO! For Straub, this is the pinnacle of a wonderful career.
Copyright © 2020 Thriftbooks.com Terms of Use | Privacy Policy | Do Not Sell My Personal Information | Accessibility Statement
ThriftBooks® and the ThriftBooks® logo are registered trademarks of Thrift Books Global, LLC