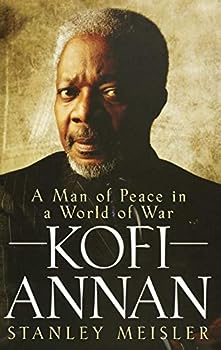 Kofi Annan: A Man of Peace in a World of War

In this thoughtful, balanced biography, former Los Angeles Times foreign and diplomatic correspondent Stanley Meisler traces Kofi Annan's unconventional rise from optimistic student to striving... This description may be from another edition of this product.

Published by Thriftbooks.com User , 14 years ago
This book was full of incite about the inner working of Secretary General Kofi Annan. I was captivated by the stories behind the stories. I really got to understand what made the man tick. I recommend this book to anyone who aspires to work for the UN.

Kofi Annan - in the eye of the storm

Published by Thriftbooks.com User , 15 years ago
The United Nations is becalmed. Kofi Annan, the courtly, quietly-spoken Ghanaian, a fixture on our television screens for a decade, has gone; his successor as secretary general, Ban Ki-Moon, has yet to stamp his personality on the world body. In the hiatus Stanley Meisler, journalist, author, UN insider, has led the inevitable rush to publish a summation of the Annan years. He is well qualified to do so. The dustcover of this book is a pointer to the treatment Meisler gives his subject in a biography which Annan did not authorise, but did not try to block. The former secretary general is pictured half in shadow, looking worried, almost shifty in his dark, pin-striped business suit. It is not the image we are used to, yet in many ways appropriate, because this was a secretary generalship of sunshine and shadow - the Nobel Peace Prize and the oil-for-food scandal; East Timorese independence and always and inevitably, the Iraq conflict. It was a time of steadily worsening relations between the UN and the United States, although the antagonism began well before Annan took office and continued despite his best efforts to find a middle way. His relations with the Clinton White House, always testy after the bombing of Serbia during the Kosovo crisis, plunged to new depths when the neo-conservative-dominated Bush Administration took office in 2001. He was powerless to influence a presidency determined to avenge the death and destruction of 9/11. The fact he even tried earned condemnation and while President George W. Bush may have talked about the "unique legitimacy" of the United Nations, in the minds of those at the White House the uniqueness and the legitimacy existed only when it was bestowed on the US to do what it wanted to do. Key Bush adviser Richard Perle openly looked forward to the death of the UN in the wake of the initially successful invasion of Iraq and the overthrow of Saddam Hussein, and the ultimate insult was delivered with the appointment of the far right ideologue, John Bolton, as American Ambassador to the international body. The fiction that Bolton was there to promote UN reform was paper thin. As Meisler writes, there were plenty of institutions that needed the reforming touch including, after the 2000 election, the American system of casting and counting votes. "But the clamour for UN reform was different. It was incessant, very loud and very suspicious"....coming too often from "American ideologues who wanted to paint a false image of the UN as corrupt, slovenly, wasteful, inefficient and anti-American". Throughout these turbulent times, Annan struggled to enhance what little clout the UN possessed in whatever way he could. While his predecessor, Egyptian Boutros Boutros-Ghali, had been a remote figure, Annan took to the celebrity circuit, becoming a fixture in New York society, attending an endless round of parties giving and receiving advice whenever and wherever he could. While naturally a charming man, one has the

Published by Thriftbooks.com User , 15 years ago
I liked this book very much because it covers the entire life of a remarkable man, who I admire so much. I am thankful to Meisler for this in-depth, objective and complete account of so many little-known facts and events from the life of Kofi Annan that I am sure will urge you to read it cover to cover. There is a lot you can and will learn from this book and that's why I highly recommend it.
Trustpilot
Copyright © 2022 Thriftbooks.com Terms of Use | Privacy Policy | Do Not Sell or Share My Personal Information | Accessibility Statement
ThriftBooks® and the ThriftBooks® logo are registered trademarks of Thrift Books Global, LLC