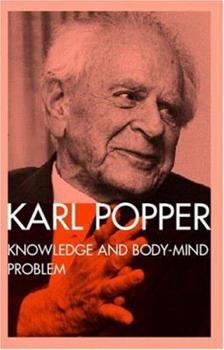 Knowledge and the Body-Mind Problem: In Defence of Interaction

First published in 1995. Routledge is an imprint of Taylor & Francis, an informa company.

Even the most rational men are in many respects highly irrational

Published by Thriftbooks.com User , 12 years ago
This very revealing book exposes Popper's vision on man, science, philosophy and his (wrong) solution of the body-mind problem. For Popper, there are three different worlds: a physical one, a spiritual one and an objective one (autonomous products of the human mind, like books or mathematics.) Body-mind problem Popper is a dualist, a body/mind man. But, like Descartes, he was confronted with the problem of the interaction between physical and mental states. For Descartes, this interaction took place in the pineal gland; for Popper, in the speech centre of the brain. Hereupon, W. Van Orman Quine asked pertinently: `Why introduce man's mind, since it is simpler and more convenient to say that only physical things and states exist? The bodily states are there anyway, why add the others?' Popper rejected fiercely physicalism. Rationality Popper doesn't assert that man is rational. On the contrary, it is obvious for him that even the most rational of men are in many respects highly irrational. Rationality is simply a critical attitude towards problems, the readiness to learn from our mistakes. Comments on other philosophers For Berkeley, the world doesn't exist except in our minds. The material world is a kind of a dream (?). For Wittgenstein, truth is a picture. A statement is true if it is a true picture of the facts. But (for Popper) a statement is only in a metaphorical sense a picture. For M. Schlick, correspondence with the facts (=truth) is a kind of mathematical one-to-one correspondence. But (for Popper) to one fact may correspond many true descriptions. Phenomenology tries to interpret physical things as bundles of sense data (phenomena). In other words, it tries to reduce physical things to mind. This book is a must read for all those who are interested in what really exists in the real world we live in.

indispensible text on epistemology and interactionism

Published by Thriftbooks.com User , 24 years ago
Popper creates an original (and useful) theoretical framework to interpret the interaction of mind and body- the world3 model. Although parts seem uninformed by advances in neurology and cognitive science, the framework itself is useful in explaining the relationship between the physical world (world1), the cognitive world (world2), and the products of the mind that exist as a result of human invention (world3). As always, Popper provides a series of compelling arguments that at the very least establish a threshold of reason that must be crossed for the serious student of epistemology.
Trustpilot
Copyright © 2022 Thriftbooks.com Terms of Use | Privacy Policy | Do Not Sell or Share My Personal Information | Accessibility Statement
ThriftBooks® and the ThriftBooks® logo are registered trademarks of Thrift Books Global, LLC