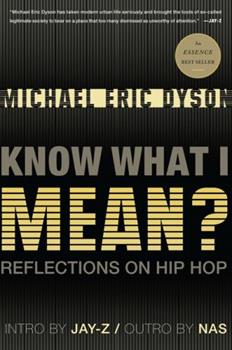 Know What I Mean?: Reflections on Hip Hop

Whether along race, class or generational lines, hip-hop music has been a source of controversy since the beats got too big and the voices too loud for the block parties that spawned them. America has condemned and commended this music and the culture that inspires it. Dubbed "the Hip-Hop Intellectual" by critics and fans for his pioneering explorations of rap music in the academy and beyond, Michael Eric Dyson is uniquely situated to probe the most...

Published by Thriftbooks.com User , 13 years ago
I'll be the first to tell you that Hip Hop has changed dramatically over the years. With the influx of commericalization the art form seems to have lost its originality. Dyson's represents Hip Hop to the fullest. He embraces the art form and respects the artists as lyrical geniuses. Dyson gives a brief look back with DJ Kool Herc, but remains focused on the social aspects of the music. Dyson brings up logical arguements that are in the defense of Hip Hop music. My favourite section was the chapter dealing with "Conscious Rap". This sub-genre of Hip Hop is never praised in the media since it approaches topics that are both social and political. Dyson is extremely candid with his assessments of music and he has many accolades from numerous artists in the Hip Hop Industry. Consider reading "Democracy Matters" by Cornel West --- he has a great section on Hip Hop music as well

Understanding A Portion of the Younger Black Culture.

Published by Thriftbooks.com User , 13 years ago
I truly enjoyed this cultural and generational work by Dr. Dyson. Similar to most of Dyson's books I found it hard to put down, always wanting to know more of his thoughts. There are areas in Dyson's thinking that I disagree with, but it always challenges me to provide a solid, realistic and comprehensible reason for my beliefs. I believe this book points a finger at the generational gap we have in the black community. The older generation needs to have a loving relationship with the younger generation and vice versa, only then can healing, teaching and correcting fix some of the problems within our culture. There are already outside forces that seek to divide us, we shouldn't ignorantly help those forces by causing internal division fueled by ego, hypocrisy and greed.

Published by Thriftbooks.com User , 14 years ago
Michael Eric Dyson is one of the most important observers and critics of African American Culture for my generation of scholars, and in this book "BAM"!, he has done it again. He situates his conversation about Hip-Hop Culture in an almost mind-boggling array of cultural contexts and demonstrates that not only does Hip-Hop reach beyond beats and rhymes, but it also crosses and intersects global boundaries in the same way that The Blues did a few generations ago. Do you want to know who black people are? It's in the music! Listen to our music and you will know who we are and where we come from and where we are going. You are not required to like or embrace us, but those seeking enlightenment about a people who have been a "problem" since we arrived on these shores will receive an education. The form of the book is appealing and brilliant as Dyson arranges the book by "track" including "shout outs," "sampling," and "nods." The text reads as if you are either listening to a Hip-Hop CD or present at a performance. In fact, the entire book is a performative tour de force. BAM! Know what I mean?

Published by Thriftbooks.com User , 14 years ago
Dyson makes cogent topics that others stray away from. The insight provided in this book is informative and valid.

Published by Thriftbooks.com User , 14 years ago
After the remarks of Bill Cosby, many intellectuals and artists have been chiming in with regards to their distaste for hip hop. After Wynton Marsalis's reduction of hip hop to "ghetto minstrelsy" and John Whorter's attribution of retardation of success to Hip Hop, many have wondered what lies in store for the future of the genre. In Know What I Mean, Dyson gives evidence and background for academics to understand hip hop and offers tools for the hip hop generation to gain, as Jay-Z says, "respect and a better way to understand ourselves." Many of the critiques stem from the expectation of hip hop to be a tangible expression of social commentary or political criticism. Fundamentally, hip hop is neither. Hip Hop is an art form containing "hyperbole, parody, kitsch, dramatic license, and double entedres." Dyson frequently argues that hip hop should be held to no higher standards towards sociological representation or politics than any other art form or institution that could also be a vehicle for social commentary or political criticism (i.e. the Church). Dyson embarks upon a series of conversations structured within an "album concept". Two of the most frequented topics through out the five tracks are misogyny and the heterosexism of hip hop. While some of the ills of hip hop can be attributed or connected to cultural amnesia, male privilege and/or religious reflections, Dyson does not draw any parallels with the attempt to excuse or validate the presence of sexism or homophobia within rap music or hip hop culture. Dyson has constructed his text, his speech and his career into a strong argument for hip hop and a lasting testament of the relevance and dignity of Black Culture and Urban Culture within our Global World.
Copyright © 2022 Thriftbooks.com Terms of Use | Privacy Policy | Do Not Sell My Personal Information | Accessibility Statement
ThriftBooks® and the ThriftBooks® logo are registered trademarks of Thrift Books Global, LLC