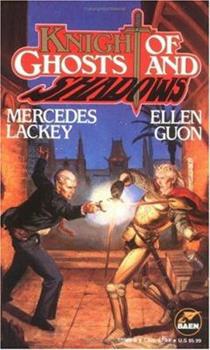 (Book #1 in the Bedlam Bard Series)

by Ellen Goun and Mercedes Lackey

Eric Banyon, musician, is out playing the blues on his flute one day, but he couldn't have known that the desperate sadness of his music would free a young elven noble from the magical prison he has... This description may be from another edition of this product.

Published by Thriftbooks.com User , 14 years ago
I guess I was lucky. Someone told me there was something called Urban Fantasy and so I went looking for a book with that in mind. Lackey and Guon did a nice job, at least for my brain. I don't know much about busking, but that seemed plausible and that elves were in LA and kind of "asleep" among us seemed like a cool and unique plot twist. If it's been done before then mea culpa. I also liked the writing changed from person to person's point of view and felt like it was easy to read, but being a lit major in college, maybe I have an easier time of it. Some readers don't like italics, but I seem to do well with it for thought dialog. The polyamory aspect of it intrigued me and was a nice edition and that was partially why I picked this book as well. While Anne Rice seems to write well about being an immortal, but I seriously doubt anyone could get it correct since no one knows. But the immortals in this book seem plenty devious and cunning and ring true even after the story ended. I also loved the feeling that music can heal and in my heart, that seemed to be the overall intended tone or path of this story. (Pun intended.) *smile*

Published by Thriftbooks.com User , 17 years ago
One of my most favored memories and my introduction into the genre of Urban Fantasy. Mercedes Lackey and Ellen Guon weave a wonderful web of Elves in the modern day world. The character development is extremely well done, but the plot is left a littl thread-bare in places. Not to worry though, as it seems that this novel is more about exploring the characters than it is about exploring a setting in a story. The characters of Eric, Beth, and Kory are well worked, and their feelings on all sorts of subjects is explored in great detail. This is one of my favorite all-time books. Give it a whirl!

Published by Thriftbooks.com User , 18 years ago
Anyone who performed or vended at either "Big Faire", which is what Californians call the two nine week long every summer Rennaisance Faires, one Northern, one Southern, will recognize this book as a fantasy utilizing what happened when Southern Faire's site for years was bulldozed and the Faire had to move. Not surprising as Lackey herself has connections to the Faire folk.Other than that, the book itself is interesting, not the least because it broke Lackey's invariable pattern of doing trilogies. Knight of Ghosts and Shadows is actually the second book in a "trilogy", if you want to call it that, book one being bowery Boyz I beleiv, about a healer witch in a modern day city slum who does not return until the second half of book three, summoned to tourney....and of course Lackety then continued on with a second "trilogy" on bard eric's life alone after she managed to get rid of the other two main characters in Knight of Ghosts and Shadows. Rather funny, it was...first, a tripod was the strongest thing in nature, and then POOF, the beginning of the first book in the second "trilogy" disposes thoroughly of the idea.It could be read as an object lesson in ignoring conditions you yourself set up in writing, I suppose, as well as a historical reference.The book itself is decent, as is its antecendent and sequel, I'd just advice not to read these three and the second three after Lackey breaks up her threesome. Pick one or the other, instead.

Just could not put it down.

Published by Thriftbooks.com User , 23 years ago
I picked the book up by accident at a used book store, and just couldn't put it down. Ms Lackey has the ability to put you into the story and make you think that you can smell the smells, taste the food, and see the people. I enjoy her work and think that it should be compulsory reading in schools, for English Lit classes.

Published by Thriftbooks.com User , 23 years ago
Seriously the best urban fantasy that I have ever read, and that's saying alot! This book clocked out over Marion Zimmer Bradley's Witchlight and Ghostlight! Poor Eric, such trails and tribulations in love...between an elf, a witch, the daughter of the man who wants to kill you,( and seems to be the best match for him, despite that brainwashing thingie she did!)...Poor Eric, poor Kory, poor Bethy...sigh..poor me! I don't have the third one yet!
Trustpilot
Copyright © 2022 Thriftbooks.com Terms of Use | Privacy Policy | Do Not Sell My Personal Information | Accessibility Statement
ThriftBooks® and the ThriftBooks® logo are registered trademarks of Thrift Books Global, LLC