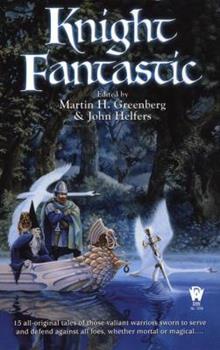 The most glorious legends of the Middle Ages come alive in this new, original anthology in the popular Fantastic series. This description may be from another edition of this product.

15 tales of knights, only 4 of Camelot

Published by Thriftbooks.com User , 18 years ago
Davis, Russell: "Father of Shadow, Son of Light" The warrior Kham-Ridhe, sweeping into conquest of a new continent, are great believers in fate. One of their prophecies is that a child will cause them to take up the cause of peace forever - and their commander's newborn son is that child. (This story is part of the foundation for a novel, working title THE CROWN OF SANDS). DuBois, Brendan: "The Cross of God" follows (in 3rd person, time of the 1st Crusade) Brother Frederick, an abbot in Germany, woken in the dead of night because his cousin Sir Geoffrey has returned from Jerusalem to see him. But Geoffrey won't trespass on holy ground, because a wizard in the Holy Land cursed him with a horrifying vision of things to come. Edghill, Rosemary and Edghill, India: "Killer in the Reign" combines elements of the legends of Tam Lin and Thomas the Rhymer in the same hard-boiled style as "The Maltese Feline" (see CATFANTASTIC V), as a serial killer stalks the neighbourhood of Carterhaugh. Hired wand Artos of Pendragon & Lake is called in because all the victims resemble the Queen, who doesn't permit the Table Knights to handle her security arrangements. Friesner, Esther: "In Days of Old" opens with the Sir Weylin early-warning system: Camelot's watchmen are to notify the king IMMEDIATELY whenever Weylin returns from a quest. This time, though, Llew and Baird argued too long over who'd deliver the bad news; they're dead meat if they can't get him to leave by sunrise. [I *like* this one. Guenevere being the kind of woman who'd design dopey-looking uniforms is a nice touch.] Hoffman, Nina Kiriki: "Faint Heart, Foul Lady" (From the saying 'faint heart ne'er won fair lady.') Setting's like Malory's England, but the characterization's better and the cast differs. Young Sir Bran, the narrator, really wanted to be a bard; instead, he's a poor knight in several ways (no money, can't repair armour, terrible lancework), because his mother reared him to avenge his father's death. He's a good person, though; when Nix (a commoner who wants to be a knight) saves him, his mentor, and a damsel from a dragon on Bran's first quest, Bran wants to help Nix out. Makings of a deal, here... Huff, Tanya: During one of the "Nights of the Round Table", Camelot's cleaning lady shows her granddaughter the ropes - and *nobody's* a hero to his cleaning lady. :) Norton, Andre: "Red Cross, White Cross" were the emblems of the Templars and the Hospitallers, respectively - and now that Philip of France's greed has forced the Church to outlaw the Templars, the Hospitallers are to take their lands. But Michael, last left alive to keep the Templars' trust, has a brother among the Hospitallers, although he himself in a cruel jest is now a knight without a sword hand. Patton, Fiona: "The Captain of the Guard" - Viktor Endrik - is his guards' only protection from the demon they serve: the Malik Lord, who used to hunt his own people in his nonhuman form before Endrik's bravery convinced

Published by Thriftbooks.com User , 19 years ago
This fourteen story and one song collection focuses on Knights as the lead protagonist. The prime knight or in some cases knights perform bravely and chivalrously difficult dangerous deeds of daring against impossible mundane and magical odds. KNIGHT FANTASTIC is a fantastic anthology as each of the fourteen tales is well written and keeps reader's attention. The knights are all heroes that strive to meet the expected code of conduct in a medieval world filled with deadly mystical and human foes willing to cheat to kill them. The opening ballad is different, but adds credence that the editors and all the contributors were paying homage to one of the more interesting characters of history, The Knight of the Realm.Harriet Klausner
Copyright © 2022 Thriftbooks.com Terms of Use | Privacy Policy | Do Not Sell My Personal Information | Accessibility Statement
ThriftBooks® and the ThriftBooks® logo are registered trademarks of Thrift Books Global, LLC