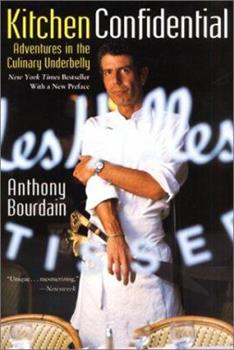 When Chef Anthony Bourdain wrote "Don't Eat Before You Read This" in The New Yorker, he spared no one's appetite, revealing what goes on behind the kitchen door. In Kitchen Confidential, he expanded that appetizer into a deliciously funny, delectable shocking banquet that lays out his 25 years of sex, drugs, and haute cuisine. From his first oyster in the Gironde to the kitchen of the Rainbow Room atop Rockefeller Center, from the restaurants of Tokyo...

If You Are In The World Of Culinary Arts You Must Read This Book!!!

Published by ChefRocco , 7 months ago
I am a 34 hippie chef. This coming September 16 will be 20 in service. Though I’m spiritual, Kitchen Confidential is my bible. You are doing your Degenerate Pirates (chefs&cooks) a great disservice by not reading our coat of arms, period.

Published by morganisyoung , 1 year ago
As someone formerly in the service industry, I loved his very real and raw look into the life. The days in the life. The inspirations. The way your feet throb at the end of a 14 hour day. I devoured this book and only wish I had discovered how much I loved AB’s writing sooner.

Published by Thriftbooks.com User , 18 years ago
This book recapitulates the life of Anthony Bourdain, a New York City chef. Bourdain describes how he decided to become a chef, and his training, from washing dishes for a Provincetown surf-and-turf, to studying at the Culinary Institute of America, to boot camp with Bigfoot, an unnamed New York City restaurateur from whom he learned how to survive in the big leagues. He introduces us to the backrooms of a busy restaurant kitchen, where we meet the people who prepare the fabulous food, learn about their tools and slang, and begin to get an inkling about the daily responsibilities of a head chef. Thanks to his French heritage, Bourdain had learned to appreciate superb food as a youngster, and his parents had the resources to send him to any college he chose. Bourdain, however, likes to live on the edge, and his desire to live life to the fullest and push the limits soon led to multiple drug dependencies and heavy alcohol usage that kept steady employment difficult to maintain for a time. Remarkably, though not detailed exactly how in this book, Bourdain managed to beat his addictions, and has gone on to become not only a talented executive chef, but also a successful novelist and writer in his spare time. How anyone could even find spare time in a chef's life as he describes it is unfathomable- -Bourdain obviously thrives on stress and challenges.The pace of the book is relentless- -it's one of those volumes that you can race through in a single day, not allowing anyone to interrupt you. Bourdain's language is not for everyone though- -he accurately records the words that are said behind the kitchen doors, so if you are squeamish about sex or take offense easily, this book is not for you.This book confirms the importance of knowing who is cooking your food. After all, food is something you put inside your body, so it is a real act of trust to consume something that someone else has prepared. It's remarkable that many people are quite content to let total strangers prepare their food. Why would anyone frequent fast food restaurants where most of the cooks are teenagers with no talent or interest in food preparation, doing it all for minimum wage? At least in kitchens like Bourdain's, although some of the cooks may be oversexed drug addicts with filthy mouths, only those who can consistently achieve high cooking standards manage to stay on. Bourdain also reminds us to use our heads when placing our orders. After all, when you tell the waiter what you want, the food isn't just going to appear on the plate out of thin air when the cook snaps his fingers. If the fish market isn't open on the weekend, then Monday isn't a great day for ordering fish. Today's luncheon special may indeed contain leftovers from last night's menu. Some items take longer than others to prepare- -hence shouldn't be ordered at five minutes before closing. This book provides a fascinating perspective on what it's like to study at the CIA, how an executive chef

Published by Thriftbooks.com User , 22 years ago
In this book, Anthony Bourdain, executive chef at New York's Brasserie Les Halles, takes us on a wild ride through that city's food supply industry that includes surprises such as heavy drinking, drugs, debauchery, Mafiosi and assorted seedy personalities.It is clear that Bourdain enjoys a true passion for both food and cooking, a passion he inherited from the French side of his family. He tells us he decided to become a chef during a trip to southwestern France when he was only ten years of age and it is a decision he stuck to, graduating from the Culinary Institute of America.Kitchen Confidential is a surprisingly well-written account of what life is really like in the commercial kitchens of the United States; "the dark recesses of the restaurant underbelly." In describing these dark recesses, Bourdain refreshingly casts as many stones at himself as he does at others. In fact, he is brutally honest. There is nothing as tiresome as a "tell-all" book in which the author relentlessly paints himself as the unwitting victim. Bourdain, to his enormous credit, avoids this trap. Maybe he writes so convincingly about drugs and alcohol because drugs and alcohol have run their course through his veins as well as those of others.The rather raunchy "pirate ship" stories contained in this fascinating but testosterone-rich book help to bring it vividly to life and add tremendous credibility. The book does tend to discourage any would-be female chefs who might read it, but that's not Bourdain's fault; he is simply telling it like it is and telling it hilariously as well.In an entire chapter devoted to one of the lively and crude characters that populate this book, Bourdain describes a man named Adam: "Adam Real-Last-Name-Unknown, the psychotic bread-baker, alone in his small, filthy Upper West Side apartment, his eyes two different sizes after a 36-hour coke and liquor jag, white crust accumulated at the corners of his mouth, a two-day growh of whiskers--standing there in a shirt and no pants among the porno mags, the empty Chinese takeout containers, as the Spice channel flickers silently on the TV, throwing blue light on a can of Dinty Moore beef stew by an unmade bed." Apparently Bourdain made just as many mistakes at the beginning of his career as did Adam, but the book however, doesn't always paint and bleak picture.Another chapter entitled "The Life of Bryan," talks about renowned chef Scott Bryan, a man, who, according to Bourdain, made all the right decisions. Bourdain describes Bryan's shining, immaculate kitchen, his well-organized and efficient staff. It's respectful homage, but somehow, we feel that Bourdain, himself, will never be quite as organized as is Bryan, for Bourdain is just too much of the rebel, the original, the maverick.Kitchen Confidential can be informative as well as wickedly funny. Bourdain is hilarious as he tells us what to order in restaurants and when. For instance, we learn never to eat fish on Mondays, to avoid S

Want to be a chef? Read this first.

Published by Thriftbooks.com User , 22 years ago
This book should be required reading at every culinary school in America. It should be the book you bring as a hostess gift when your friend (who's a fabulous chef) has another dinner party but won't stop talking about how, someday, she wants to open 'a little restaurant.' In short, it is 100% the real deal when it comes to what it's like to be a professional chef. It captures the excitement, the misery, the pain, the anger, the pride and the abuse that is part and parcel of cooking in a restaurant. As a pro-chef-turned-pro-writer, it is the book that I always wanted to write but never did because, frankly, I wasn't in the life long enough to do it justice. In that short period, I had a freakish ascent from prep cook to bistro sous chef (and w/out the benefit of cooking school). During that time, I witnessed everything that Bourdain writes about - and quickly realized that I didn't love the world of 24/7 back-breaking work in someone else's restaurant to make it my calling. And as for the idea of opening my own place - as Bourdain himself said in a recent online chat, 'NEVER NEVER NEVER NEVER.' Not only do 80% of restaurants die a horrible death within 5 years of opening, but those that survive extract an incredible toll on their owners. (You've got to be a little of a masochist to be chef, but you are a victim of psychosis if you become a chef-owner.) Bourdain is justifiably proud of his current post as a journeyman chef as NYC's Brasserie Les Halles, but I think he should be even prouder that he managed to capture everything it means to be a chef in his first nonfiction book - something that The 'BAM!' Food Channel, with its dozens of programs, doesn't even begin to understand. Bravo, chef!PS: Bourdain advises that the quickest way to find out if you *really* want to be a chef is to become a restaurant's dishwasher for six months. And he's absolutely right.

What a wonderful read this is...

Published by Thriftbooks.com User , 22 years ago
I can't remember the last time I enjoyed a book more! From the first page to the last, this brutally honest testament of a life as a chef is an absolute "can't put it down" page-turner.It's wicked, funny, touching and fascinating. I went on errands with my wife, so that I could read to her while she drove -- it's so good that you want to call up strangers and just start reading pages to them -- any page will do.The best writing is honest writing -- and it doesn't get more honest than this.What a geat read. I'm sure that Les Halles, where he works his craft, will be "booked" to infinity because of this book -- as it should be.Anyone who loves food will devour this with greed...and wish it were longer.

I laughed so hard, I forgot (on purpose) to eat! Yes! Yuk!

Published by Thriftbooks.com User , 22 years ago
Oh, you are really going to enjoy this book...while you're reading it, that is. Then afterwards you'll be torn between the memories of the hilarious antics Bourdain describes in his book...and memories of the disgusting things that go on every day in restaurant kitchens. Believe it or not, it IS worth reading! (And take it from a former restaurant manager, it is, unfortuately, true - the after-hours shenanigans, especially!)Bourdain has put together a truly gonzo collection of restaurant tales that aren't all depraved...but, like his restaurateur/chef subjects, most of them are! Kudos to him for a book that is this honest while being this hysterical. If you have the, um, stomach for it, this is a book you'll remember fondly. Well worth digesting!

Kitchen Confidential: Adventures in the Culinary Underbelly Mentions in Our Blog 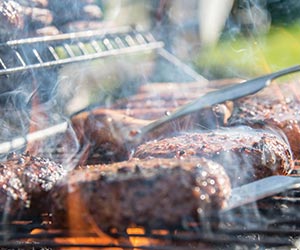 Three Chefs Who Are Masters of the Grilliverse (and Authors!)
Published by Beth Clark • June 25, 2018

The Grilliverse is searing with talent, but these three chefs are iconic Masters of Meat.