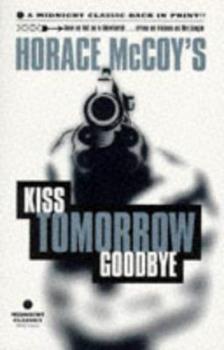 The classic novel of the Dillinger era in America "Love as hot as a blow torch . . . crime as vicious as the jungle" (from the original 1948 edition)

Published by Thriftbooks.com User , 16 years ago
Fiction doesn't get any more noir than Kiss Tomorrow Goodbye. It's a gangster tale told by a gangster. And not just any gangster at that. Ralph Cotter is evil incarnate. He's an amoral criminal who kills in cold blood. But unlike most other murdering thugs, Cotter is a cultured, educated man. His Phi Beta Kappa key is probably the last thing he ever came by honestly. To make everyone aware of his intellectual superiority, he freely uses five dollar vocabulary words and regularly makes obscure references to the classics. Following a harrowing escape from a prison work farm, Cotter shacks up with a slutty gun moll named Holiday. It doesn't take him long to find corrupt police officials he can blackmail into doing his bidding. And his charming demeanor allows him to become romantically involved with the obscenely wealthy daughter of an ex-governor. Is the plot of Kiss Tomorrow Goodbye a believable one? Of course not. I doubt it was meant to be. This is an allegorical novel. A fairy tale for adults, if you will. The novel's strength lies in its ability to convey certain truths about human fallability through the very detailed and astute introspection of the repugnant but fascinating narrator. Both Cotter and the book itself have an overpowering audacity that makes for very compelling reading. Kiss Tomorrow Goodbye is an original work of crime fiction that embraces the noir tradition and takes it to a whole new level. Highly recommended.

He's Bad All Over

Published by Thriftbooks.com User , 18 years ago
This is a first-rate gangster book told in the first person from the perspective of Ralph Cotter, a thoroughly evil man. It's a terrific example of noir fiction. It's violent, gritty and tough, exploring the dark underbelly of a corrupt city.Beginning with a prison breakout and re-establishment back into his life of crime, Ralph proves to be a violent, self-centred man. His life revolves around making money, and if that means robbery and murder is involved, then so be it. He is joined by Holiday, a jealous, suspicious and spiteful gangster's moll of low-morals who is prepared to sleep with any man who walks through her door, and Jinx, a small time crook happy to hang on to the coattails of Ralph's criminal genius. They are all a group of criminals who are anything but reliable, willing to rat each other out for any price. The unnamed city in which the book is set is filled with corruption, from the criminals themselves to the crooked cops who police it. The grab for money is intense and morals are non-existent.As with all noir stories, there are no good or nice characters, most of them are pretty repugnant people, and there is no chance of even a remotely happy ending.

Published by Thriftbooks.com User , 19 years ago
Here's a 1948 hardboiled novel that almost reads like it could have been written yesterday. Not quite, but almost. It's the real McCoy, not a fake. The words are hard as nails--occasionally dipped in acid and that makes this all the more what it's spozed to be.Take a con who's Ivy League educated and has warped aspirations of making himself as corrupt as possible. Yeah, do that, and at the same time, let him keep his three-dollar words to throw in when he feels like it, when he wants to prove--to himself, mostly--that he's a hell of a lot more educated than the guys he 'admires': Alvin Karpis, Pretty Boy Floyd, John Dillinger. It's a potent mix, and McCoy does it up just right. The language is not stupid; it's perfect, reflecting the main character (Ralph Cotter)'s twisted psyche. Everything's from his point of view.You got your shysters, your corrupt cops, your wicked women. Oh yeah, you got 'em, all right, but when they're in the picture, the dialogue snaps like a wet Coney Island towel wielded by a wiseguy. You wanna good read that reminds you of American knowhow--as in I know how to push your buttons, buddy? I know how to give you a story that tells you about the things Americans think about, but don't talk about. This is it. This is an egg whose shell you can't break. That's how hardboiled this is.

The toughest and most bitter gangster novel ever written

Published by Thriftbooks.com User , 19 years ago
Horace McCoy's Ralph Cotter character is a remarkable exception in U.S. gangster novel history. Unlike Donald Henderson Clarke's Louis Beretti, William Burnett's Little Caesar, Armitage Trail's Tony "Scarface" Camonte, or also James Cagney in the movie "The Public Enemy", who are ill bred gangsters created by the system, moving in big cities they know by heart and surrounded with people they've been knowing since their childhood, who kill only to eliminate the competition, Ralph Cotter - or whatever his name is, we'll see that Cotter is not his real one - is an individual, educationed one, a gangster of his own, with his own hates and fears, escaping from a prison farm and coming in a city he doesn't know - and which is never named -, getting involved with dangerous people he doesn't know.But he's smart, gutted and above all, totally immoral and in spite of all he manages to dominate his world, using generalized corruption and blackmailing to do what he wants, turning the situation up side down, for his own benefit.But even a guy like him can't do anything againt the system. When he meets Margaret Dobson he doesn't know he just entered a world of lies and compromising. After a while Margaret presents him as her husband to her millionaire, overpowerful father, who doesn't like it at all. When he's gone Margaret says they have to go and get married at once. Of course Ralph - who meanwhile took the name of Paul Murphy - doesn't want to get married but she uses some verbal threatening to force him, he can't do anything. He refuses the money for annulment of the marriage, in order to get rid of her and not be chased. But by doing this he doesn't do anything but seduce Margaret and her father, who finally chase him. The Dobson family gives Margaret to him for a million dollars. What Cotter has to say doesn't count and he's really forced to live with a girl he doesn't like, for the rest of his life. His old demons and fears - quite heavily described by the writer - help him to understand his desperate situation: he's now a robot, commanded by the Dobson family; he lost his ability to make a choice. He runs away from Margaret. But just before she took his gun away...Again McCoy succeeds in describing our society as it is, merciless and immoral, where the middle-class man looses all his dignity when he faces the big ones and their many forms of greed. Like in "They shoot Horses, don't they?", where Gloria Beatty smiles as Robert Syverten is about to shoot her, Ralph Cotter wishes he could laugh as Holiday Tokowanda, his tough girlfriend who just showed him up as the murderer of her brother, kills him. He knows he's not a man any longer: when the bullets hit him, he doesn't feel anything. McCoy's message is clear: in a world like this, the best ending for his main characters is death."Kiss Tomorrow Goodbye" is a cursed, splendid, terrible masterpiece that is highly, unfairly underrated and misunderstood, produced by one of the best and most neglected write
Copyright © 2022 Thriftbooks.com Terms of Use | Privacy Policy | Do Not Sell My Personal Information | Accessibility Statement
ThriftBooks® and the ThriftBooks® logo are registered trademarks of Thrift Books Global, LLC