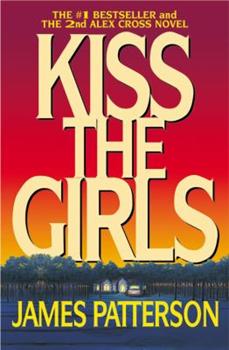 (Book #2 in the Alex Cross Series)

Join Alex Cross on his most terrifying murder case yet in this #1 New York Times bestseller and one of PBS's "100 Great American Reads." In Los Angeles, a reporter investigating a series of murders is killed. In Chapel Hill, North Carolina, a beautiful medical intern suddenly disappears. In the sequel to Along Came a Spider, Washington D.C.'s Alex Cross is back to solve the most baffling and terrifying murder case ever. Two clever pattern killers...

Published by Thriftbooks.com User , 19 years ago
I never saw the movie. Never read a book by Patterson. Never really wanted to. So when I idly picked up "Kiss the Girls" while browsing a local bookstore, I didn't expect much; it was on a table of "fun beach reads" or some such thing.I read the first page or two. I bought the book. And I can't remember much after that, except that, heart pounding, palms sweating, I entered the obscenely diabolical world of two serial killers: The Gentleman Caller, and Casanova, terrorizing both Coasts at once. With skill and his own brand of genius, Patterson takes the reader into the crazed yet terrifyingly logical minds of each killer. We are there while they stalk their victims: young women who are smart, educated, self-assured, and perfectly beautiful. At least in the eyes of their killers. We are there during some of the most gruesome and terrifying murders. We are there as Casanova sexually tortures his live victims in his House of Horrors, in which one infraction of the "house rules" results in horrible death.What is the connection between these two killers? What is their sick purpose? It falls to police detective/psychologist Alex Cross to solve the mystery. But Alex has more than a professional interest in the case. His beloved niece Naomi is one of the missing women.I challenge anyone to put this book down once begun. I was absolutely amazed at the hold it had on me--and still does. I immediately ordered the next in Patterson's Alex Cross series, "Jack and Jill." And I have recommended "Kiss the Girls" to every book-loving friend I have.

This is the one!

Published by Thriftbooks.com User , 21 years ago
Of all of Patterson's "Cross" novels, this still remains my favorite. The premise was (at the time of writing) original and amazing. You could practically feel yourself there among the women trapped in Casanova's collection at times, and it was all in all a great book. The movie tried to be faithful to it, but 60-year-old Morgan Freeman as a thirtysomething Alex Cross just didn't cut it. Don't base your opinion of the book on that movie...trust me. This book is one you'll finish quickly and enjoy tremendously.

Published by Thriftbooks.com User , 21 years ago
Patterson has found a way to disturb readers which is beyond the skills of most authors. To think about not only one, but two serial kidnappers/rapists/murderers, seriously upset this 17 year old high school boy. Alex Cross is one of the most realistic fictional detectives ever. He has lapses in judgment, just like real people, and the way he sometimes forgets something just as he needs to remember it is so true to life. Kate McTiernan is one of the most heart-rending stories in modern fiction. Hers is a highly endearing character; her toughness, her strength of will in situations that would break the strongest of us, her anti-narcissism, all of them engender not only our sympathy and compassion, but also our affection and admiration: we love her from the moment we meet her. Patterson has a way of keeping us on the edge of our seats; he makes us need to see that Casanova and the Gentleman Caller are not just in jail, but are dead. Anyone such as Casanova (or the Gentleman Caller), who would consciously use something that is so special to a woman as her beauty and her sexuality, and make her loath it and wish it were not, while saying that he loves her, is an unspeakably evil person who needs to physically, emotionally, and psychologically feel the psychological, emotional, and physical torment of his victims. That statement is a basic truth of our emotional need for justice, and the scenario in this book intensifies that need for justice: The way in which the scenario plays out is what elevates this book far above even the excellence with which it was written. The most horrifying part of this book may be what is implicit from the content of the book: That there are actually people out there like Casanova and his friend the Gentleman caller. Another creepy thing about this book is that it is indeed a book, which means that all the images that the book produces are produced by your own mind. To love someone and to have them taken away from you is one of the most crushing things a person can endure. But to know that they are being kept against their will and repeatedly raped would be even more excruciating. This book succeeds in tapping that protective instinct that we all have. The fast pace of this book grabs hold of your emotions, but it is you that can't let them go. You won't want to put this one down.

Published by Thriftbooks.com User , 23 years ago
Yes, this book is frightening and very suspenseful. I would recommend this book to anyone who has a passion for nail biting thrillers. This is a mystery that keeps you on the edge of your seat from start to finish. If you like mysteries this one was written for you. Kiss the Girls is about frightening man in his mid twenties. He goes by the name "Casanova". This creepy character stalks and then captures beautiful, inteligent, young women. Once captured he brings them to his home deep within the thick forrest of North Carolina and locks them up in a room. He then goves them certain rules to follow. If they break these rules Casanova puts a frightening end to their life. In this distrubing case there are many detectives trying to solve it. There is one detective Cross who is passionately involved because his neice Naomi has been captured by Casanova. Detective Cross refuses to rest until Casanova is captured and broughtr to justice. The terribly suspenseful, frightening ending has several surprising twists. I guess you'll just have to read it to find out. This book has a lot of good aspects. It is loaded with gripping suspense from start to finish. The frightening story never lets you take a rest. Another great aspect of the book is that it has very short, snappy chapters. Each chapter is only about 2 to 3 pages long and ends in a very suspenseful twist. This style of writing makes for non-stop, action-packed thrills. There are not many bad aspects about this book. One of the drawbacks is that the author goes into too many gory details. It is also very hard to follow who is who in this book. The good aspects of this story definitely outweigh the bad aspects, therefore, rush to your nearest bookstore and buy this book today.

couldn't put down if my house was on fire!

Published by Thriftbooks.com User , 23 years ago
This is my first James Patterson book that I have read, and trust me, it won't be my last. I saw the movie first and thought it was pretty cool. I'm into this thing where I see a movie and if it's a book and I want to read it, then I just go out and buy the book. Well with this book, I could not stop reading it. The 2 and half page chapters filled with suspense just caught me in their web. If I could have, I would have read this book in one day. The more I read, the faster reader I become, but this time, I didn't want to read fast. I loved all the suspense and drama in this book and I had to fight with myself before I put it down and actually went to sleep. I have to admit, it is very graphic and disgusting at a lot of parts, things people wouldn't even dare show in a movie. But other than that, I thought it was amazing! It was very hard to sleep at night after reading some of it though. It scared me! The idea of a kidnapper/killer/rapist hiding behind the walls in your house is terrifying! A+, 10, ****! Great piece of work! END

Kiss the Girls Mentions in Our Blog