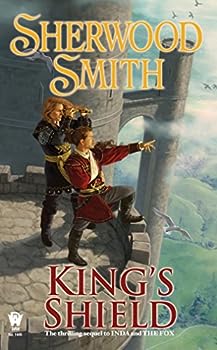 This description may be from another edition of this product. Acclaimed Inda series within Sherwood Smith's epic fantasy Sartorias-deles universe - Military fantasy woven with courtly politics, vast worldbuilding, and diverse characters Inda was the second son...

Published by Thriftbooks.com User , 13 years ago
Although I couldn't put this book down and enjoyed every moment reading it, I felt it didn't stand side-by-side with the first two books. Each of the first two left us was countless surprises around ever corner. Where this one just lead us mostly on an endless road to a very short-lived war.

Published by Thriftbooks.com User , 13 years ago
This book continues the tale of the first two, and it's recommended to begin with _Inda_, as the story is complex and full of characters and events and there is little to no recapping of information. After nine years of exile from his country, Inda, still only around 20 years old, is returning with news of an invasion by the Venn. He returns to an uncertain welcome and many unknown changes that have occurred since he was wrongly accused of killing another boy at the Academy where sons are trained in military skills. The old king and many others, including Inda's older brother, have been killed in plots and intrigues and Evred, the king's younger son and Inda's friend, is newly made king. Inda had found out about the Venn after he had built and successfully lead a fleet against other notorious pirates. He's had years of experience with sea battles and has won a deserved reputation for winning battles and being a military genius. But when Evred chooses Inda as his Royal Shield Arm, in charge of the coming battle against the invasion, Inda is years behind in the Academy training he missed; fighting on land is not like fighting on sea. He also needs to reintegrate himself into the tightly-bound warrior society he'd left behind. The pace is non-stop, beginning as Inda and his companions, Signi, the Venn sorceress whom he loves, and Jeje and Tau, creep carefully back, unsure of their welcome. Then, reunited with old Academy mates, Inda is swept off to the capital city and the new king, with hasty preparations for the coming invasion to be made. Sadly, Inda barely has time to appreciate being home--spending less than a day reunited with Tdor, the childhood friend who is his arranged bride, and no time at all to visit his aged parents. The logistics of moving men and positioning them so maximize their lesser numbers against the might of the Venn invaders takes up much of the book, with skirmishes and battles leading up to the main confrontation with an enemy army that none of them may survive. While I would have preferred a bit more focus on the personal drama, there were still telling bits interwoven in the action. There are issues none of the characters want to face and no time to do it at any rate, so they simmer behind the scenes. Although there is a suitable conclusion to this book, it is still good to know that there is another book coming in this series. The characters and events and the world are so well-drawn and compelling, one can't help wanting more. This is another fine book in an excellent series that I would not hesitate to recommend.

It took my breath away

Published by Thriftbooks.com User , 13 years ago
The characters, the cultures, and the countries are so vivid and three dimensional and there is such a rich back story - this world feels *real*... it is more like reading Tolstoy or George Eliot than a work of fantasy, in that sense. The solidity and depth of the setting and culture are felt rather than described and the characters' complexities reveal themselves naturally over time. The first two books, Inda and Fox, introduced us to the characters and the world: In the first we are shown Inda as a boy going off to a military academy, drawn into the complex ties of aristocratic kinship, and given a glimpse of the intricacies of politics and personality. We saw Inda, still so young!, rushed off into a bewildering exile and learned with him the ways of the sea... only to watch that world too disintegrate for him. The second book: Piracy, teamwork, strategy & tactics - and lots of action at sea and for those back at home in the next book. ...and, deliciously, an ever deeper and more subtle exploration of character, of friendship, and of politics. King's Shield takes all the beauty, depth, complexity, and richness of the previous books and brings it all home - literally and figuratively. For me, this book was the ultimate payoff for the investment I have made in this world and these characters. I consider it one of the best works of fantasy I have ever read - the intricate, tightly woven plot (and no lack of breath taking action!) which both drew me into a passionate caring for the characters and made me really think about war, about conscience, responsibility, friendship, love, duty... and the hard choices that we all face. This wasn't a light, easy read - not a delicate, slightly frothy fantasy romance. Crown Duel, Trouble with Kings, Sashiara en Garde, and the lovely short story in Lace and Blade are all beautiful examples of that genre - magical, special books, but lacking the depth and complexity of the Inda series. King's Shield drew me into it almost at once, but demanded my attention, my focus...my heart, but that investment was exponentially rewarded. So, if you love character driven fantasy with strong, intelligent plotting - read this series... read it now!

nothing to be disappointed about...

Published by Thriftbooks.com User , 13 years ago
The third book in the series and still captivating. I disagree with readers who want quickly-solved dilemmas,1-2-3, done! I certainly do not complain about the series going into a 4th or 5th book. I believe and trust in the author to know where she wants to lead us. I 'd rather enjoy and look forward to reading more chapters and more developments of the story than expecting it to end forcibly to meet a 'three-volume-only' requirement. Besides, the author is right on target with her yearly issue of the new sequel. And who said it's boring because there's no fights or battles involved? Personal and inner conflicts are just as important in the characters as their prowess versus nature or antagonists. Two thumbs up for Sherwood Smith's books and series!!!

Published by Thriftbooks.com User , 13 years ago
Sherwood Smith's world is so complex that it, at times, feels as detailed as Tolkien's. It wouldn't surprise me to discover that she has written her own language too. I don't think many authors take the time she does to flesh out a world's political and social structures and I believe that this is one of the reasons why the Inda series is so good. Even the minor characters are shown to have motives, belief systems and histories. Although it does make it a bit confusing and I will agree with the previous reviews that wished for a list of characters. You can find most of them on her website, but it would have been nice to just quickly flip to the back of the book when I forgot the name of Cama's brother. And there were too many Noth's to count. I think Smith has been labeled as a young (female) adult writer, which is a shame because I think it may deter some of the male fans from trying the series. But Smith is right up there with Orson Scott Card when it comes to military strategy, pacing, and action. She also reminds me of Carol Berg and Lynn Flewelling, both of which have been able to create stories that cater to most if not all readers. The only warning I will give is that the Inda Series is not a light read; you won't be able to breeze through them. Not if you want to fully appreciate the scope of Marloven Hess. But it is well worth the effort and readers should take advantage of authors who are willing to put in the time that it takes to create such a intricate and fascinating world.
Copyright © 2020 Thriftbooks.com Terms of Use | Privacy Policy | Do Not Sell My Personal Information | Accessibility Statement
ThriftBooks® and the ThriftBooks® logo are registered trademarks of Thrift Books Global, LLC