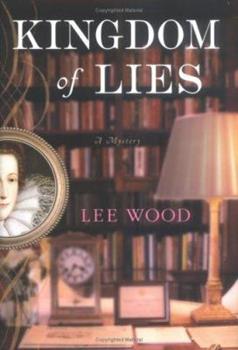 When a woman turns up drowned on the grounds of a royal estate, Leeds sergeant Keen Dunliffe is hoping it's just a case of a drunken skinny-dipper who fell and hit her head. But when the woman turns out to be a historian whose specialty is English royalty and politics in the eighteenth century and who was attending a conference at a local university, it's too much of a public relations nightmare to take lightly. The mystery deepens when two secretive...

Another 2 Thumbs Up for the Audiobook Edition

Published by Thriftbooks.com User , 16 years ago
I also downloaded this to my ipod to take on a long trip. It was perfect. The reader was very adroit at doing not just various British accents but also American accents. Keen Dunliffe, the disgraced Yorkshire copper, is a very appealing character. Flawed, but honorable by his own lights, he makes a good foil for the rather uptight American history professor. There is twist after turn of the plot and the conclusion does not disappoint. I am waiting hopefully for the next in this series.

Published by Thriftbooks.com User , 17 years ago
This is one audio book that will keep your attention. I started my trip (automobile) with it, and upon my arrival had to take it inside to hear the ending.

Published by Thriftbooks.com User , 17 years ago
In Leeds, a teenage jogger finds a drowned naked woman in a pond on the grounds of Harewood House; the current owner is a first cousin to the Queen. Leeds Police Sergeant Keen Dunliffe heads to the scene hoping an accident not murder occurred. American Professor Gillian Waltham calls the police because her roommate at a conference at Leeds University is missing. Dr. Waltham arrives at the Weetwood Police Station and identifies the victim as Dr. Christine Swinton, an eighteenth century English Royalty historian. Soon afterward Met Chief Superintendent Pete McCraig and Justin Scudder, personal assistant to the Home Secretary, arrive to ask Keen to stay close to Gillian to see if he can learn something about Christine's death. She is the fourth such victim left on a royal estate in the past few months. Though he believes the Met blokes are hiding much of what they know, he agrees to the assignment because he has an opportunity to see his twin sons living with his former wife and her fiancé in London. He might have reconsidered taking the job if he knew what awaited him in town. KINGDOM OF LIES is an interesting police procedural starring a cynical police sergeant and an upbeat professor. The story line is fun to follow as the audience along with Keen wonder what the Met is hiding. Though the Keen-Jillie relationship is an overused plot device, their working together make the tale succeed and leads to the final odd twist with the "guardian angel". Fans will enjoy this spin that sets up future tales starring the acrimonious cop who is somewhat mellowed by the élan for more in life professor. Harriet Klausner
Trustpilot
Copyright © 2022 Thriftbooks.com Terms of Use | Privacy Policy | Do Not Sell My Personal Information | Cookie Preferences | Accessibility Statement
ThriftBooks® and the ThriftBooks® logo are registered trademarks of Thrift Books Global, LLC