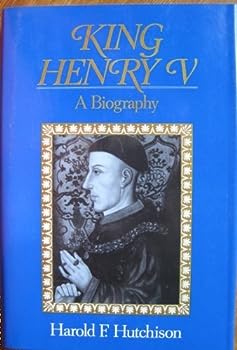 Biography of Henry V of England This description may be from another edition of this product.

Published by Thriftbooks.com User , 19 years ago
The material to understand this late-medieval conqueror is more abundant than one realizes: not only detailed chronicles, State documents and accounts of his wars, but personal anecdotes and financial records. And Hutchison makes good use of it, working not from secondary but from primary sources, giving a detailed, perceptive and highly readable account of a remarkable individual. If he works to contrast the Henry of history with the Henry of Shakespeare, that is understandable and indeed right, since it is through the plays - and especially through Laurence Olivier's unforgettable film - that most of us have become aware, if at all, of the fame and success of this usurper's son. Hutchison treats his subject with a sympathy that does not stop short of admiration, giving just and honourable due to all his remarkable qualities - able politician, bold and independent mind, excellent organizer, and finally, as everyone knows, superlative soldier. Yet his final verdict is inevitably negative: Henry stiffened the social situation of England, threw the country into a war which it did not have the resources to maintain, and which - but for his genius - would have ended in disaster early on (there is something very telling about the frenzied rejoicing which greeted his victories); brutalized his followers, degraded the rule of warfare, and, in the end, presided over the spiritual impoverishment and material ruin of two great countries, as the great age of Chaucer and the Roman de la Rose died out in a sea of blood and even the military glory of Henry gave way, not so much to the splendid but brief phenomenon of St.Joan of Arc, as to the crooked and cruel practical politics of Louis XI, the establishment of brutal royal tyranny in France and the collapse into civil war in England. Like that of all conquerors - think of Alexander of Macedon, of Gengis Khan, of Napoleon, Wallenstein, Gustavus Adolphus, Charles XII of Sweden, Hitler - Henry's ultimate legacy was purely one of collapse and negation: he achieved nothing except a blaze of unconstructive glory.
Trustpilot
Copyright © 2022 Thriftbooks.com Terms of Use | Privacy Policy | Do Not Sell My Personal Information | Cookie Preferences | Accessibility Statement
ThriftBooks® and the ThriftBooks® logo are registered trademarks of Thrift Books Global, LLC