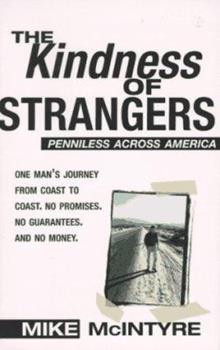 A former columnist for the Washington Post describes his coast to coast walk, from San Francisco to Cape Fear, with no money or plans, depending only on the kindness of the people he encountered along the way.

Published by Thriftbooks.com User , 21 years ago
in light of recent events this book shed a ray of light on the dimming light of humanity in our world. A man leaves home with only identification and hitch hikes across the country relying only on the "kindness of strangers." Although he clearly points out that were he not male and caucasion the outcome could have been much different, the story is still heart warming. I have recommended this to sooo many friends and all have thanked me profusely for helping them search their hearts and souls with out being battered with questions of faith.

The Kindness of Strangers...

Published by Thriftbooks.com User , 22 years ago
This book reminds me a little of Scott Savage's book (A Plain Life: Walking My Belief), although the author is not a Quaker. Reading one chapter in another book was enough to draw me to this title. At 37, Mike McIntyre was an established journalist, with a good job in San Francisco, a girlfriend, a nice apartment. His job enabled him to travel all over the world, but he felt moved to leave it all behind, and travel by the grace of others from the West Coast to Cape Fear, North Carolina. He feels he's a coward, that he's afraid to take a gamble with anything...neither of these being words that describe Quakers. But his feeling that an inner voice is telling him to do this, and his conviction to go ahead despite less than encouraging words from his family ("you'll get raped," his own grandmother tells him) are, to me, a spiritual calling. He says he will not take money, not even if he finds it on the road in front of him. He sets out, wary but determined to go. Like Scott Savage's need to turn over his already expired driver's license, McIntrye has picked his destination as a symbolic gesture. "If I make it to Cape Hope," he says, "it will be as a different man from the one who starts the journey. I am afraid." Right out the door, he finds himself a fill-in guest house on a talk show ("Life in the Country") on a local radio station. He isn't alone as a guest - his new partner is a tall, blond with red lipstick and high heels, a firefighter named Diana, who used to be named Dennis. The book is full of strange encounters, and is an interesting read, to put it mildly.

Published by Thriftbooks.com User , 23 years ago
I was in a trance from page one right through the epilogue. The author had the guts to do what so many of us are terrified of doing--to leave our lives for a couple of months, to step away and challenge our biggest fears. He describes his experience in a straightforward, no-punches-pulled manner that puts the reader right into his shoes. The reader sees "the real America"--a believable America, sees Life sliced right open, sees himself or herself vicariously exposed. The book shows heart, humor, whimsy, commitment, strength, vulnerability. A moving tale. A gift. I'd give it six stars if I could.

Published by Thriftbooks.com User , 24 years ago
I bought this book only days before I left on my own roadtrip across the country. I honestly didn't think that anyone else had expressed the exact same fears that I had when leaving my life behind. Between this book and my own travels, my faith in humanity was restored. There are still good people in this land that will take you in and feed you, even tho' you've met them minutes before. I lost this book during my travel to someone whom I know needed it, and I don't regret that loss. It's always given as a gift to anyone who asks me about what it was like on the road for 6 months with only $1,000. I currently cannot survive without a roadtrip every 2-3 months now. To quote the book, "Hell... maybe you'll find Utopia out there and won't want to come back."
Trustpilot
Copyright © 2022 Thriftbooks.com Terms of Use | Privacy Policy | Do Not Sell or Share My Personal Information | Accessibility Statement
ThriftBooks® and the ThriftBooks® logo are registered trademarks of Thrift Books Global, LLC