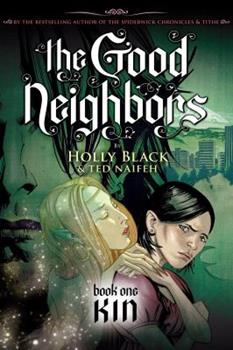 (Book #1 in the The Good Neighbors Series)

From the amazing imagination of bestselling author Holly Black, a mysterious and wonderful teen graphic novel masterpiece. Rue Silver's mother has disappeared . . . and her father has been arrested, suspected of killing her. But it's not as straightforward as that. Because Rue is a faerie, like her mother was. And her father didn't kill her mother -- instead, he broke a promise to Rue's faerie king grandfather, which caused Rue's mother to be flung...

The Good Neighbors shows great promise as a series

Published by Thriftbooks.com User , 13 years ago
Rue Silver's life is about to be turned upside down. Already, her mother has disappeared after having a loud argument with her father. Even worse, she's now beginning to see things --- frightening things, like people with horns and wings that no one else notices. What's worse, the things she sees are looking back at her. Matters quickly get worse from there. Police are already curious about her mother's disappearance, but when one of her father's college students is found murdered after visiting his office, they arrest him. Armed with a determination to uncover the truth, Rue begins investigating the case on her own. What she finds brings her deeper into a fantasy world she knows precious little about, a world she's a part of whether she likes it or not: the dark and dangerous realm of the faeries. Sometimes known as "the fair folk," they have some very sinister plans afoot. Rue gets a taste of those plans when she meets the grandfather she never knew. He wants her to come live with him, but Rue is rightfully afraid. Holly Black has proven she knows her way around this territory, most notably in The Spiderwick Chronicles, but also in the faerie-themed books TITHE, VALIANT and IRONSIDE. This is her first time writing about the faerie world in graphic novel form, though, and for this foray in the medium, she has been paired with a perfect partner in the form of artist Ted Naifeh, himself no stranger to the otherworldly. His Courtney Crumrin series is a top-notch mixture of fantasy and spine-tingling fiction. Here, he nicely gives his artwork a solidly human perspective shaded with dark overtones. He evokes fear and wonder at the same time, and the flow of his panels has a cinematic quality that pair gracefully with Black's lean prose. As an introduction to this new series, KIN kicks things off with a bang. It nicely sets the stage for a portentous battle between evil forces and the good people who will try to stop them. The murder mystery at the heart of this story is perhaps too quickly and easily dispatched, but it clears the way for the far more interesting storyline of Rue's self-discovery. Rue is refreshingly unique, a bright character (it's nice to see a teenage protagonist who doesn't have to speak with razor-sharp wit all the time) with a genuine curiosity about life. She's smart and determined without being affected, a nice touch. The Good Neighbors shows great promise as a series. It targets an audience 12 and older with a story that effortlessly glides between thriller and mystery. Equally impressive is its fine pacing; it's a book to savor at leisure and the plot doesn't feel the need to rush. Still, that kind of pacing can have a dark side, as evidenced by the publishing schedule for future books in the series. The second and third installments are projected to be published in 2009 and 2010, respectively, a long wait for readers anxious to find out what will become of the enchanting Rue Silver. --- Reviewed by John Hogan

Published by Thriftbooks.com User , 13 years ago
As a huge fan of Tithe, Valiant and Ironside I was super excited for this graphic novel to come out. I was not dissapointed. The art was beautiful and the story kept my attention. I could not put this book down until I finished and I cannot wait until the next book comes out!

Published by Thriftbooks.com User , 13 years ago
From the Publishers of Jeff Smith's Bone Volume 7: Ghost Circles comes a new series from one of the authors of the The Spiderwick Chronicles (Boxed Set): The Field Guide; The Seeing Stone; Lucinda's Secret; The Ironwood Tree; The Wrath of Mulgrath. The series called Kin debuts this fall with The Good Neighbors. This is a fantastic graphic novel. The story is strong and compelling, the characters are enticing and draw the readers in, and the artwork is excellent. This is the beginning of the story of Rue Silver. Rue thought she was a typical student - she had good friends, hung out, went to class and broke into abandoned buildings to climb and explore in them. But now her mother has just disappeared, her father has been arrested, suspected of killing her and one of his grad students. However the story is not as direct as that. Because, unbeknownst to her, Rue is a faerie, like her mother. Rue embarks on a quest - a quest to save her father, a quest to find her mother and after discovering her fey roots, a quest to understand herself and her role in the world. For a battle is brewing between the faerie world and our world, and a dark faerie has plans to make mortals live in fear of the good neighbors once again. This book reads like a cross between Neil Gaiman's Neverwhere: A Novel and Stardust but with a much darker edge than Stardust. Drawn completely in grayscale, it has an otherworldly feel yet strangely familiar. Black's story draws you in and compels you to read on and Naifeh's images powerfully complement the words. The only drawback is that the book leaves you hanging and desperate to find out what happens next, and yet I cannot find a release date for book two anywhere. So once you are hooked you might have to wait a while for the next installment. But even with that the book is more than worth the effort. (First published in Imprint 2008-09-19.)

Published by Thriftbooks.com User , 13 years ago
I loved the story and the art. You should have switched Rue and Aubrey's names though. I wonder how you came up with Rue for a girl's name. The artwork took a while to grow on me, because it is so dark. I look forward to a 2nd book. If you like this book, check out Jamie McKelvie's Suburban Glamour.

Published by Thriftbooks.com User , 13 years ago
I have read all of Holly Black's work and it came as no suprise to me that I loved The Good Neighbrs. I was concerned that I would not enjoy a graphic novel as much as her other stories, but I loved it. I can not wait for the second one to come out!
Copyright © 2022 Thriftbooks.com Terms of Use | Privacy Policy | Do Not Sell My Personal Information | Accessibility Statement
ThriftBooks® and the ThriftBooks® logo are registered trademarks of Thrift Books Global, LLC