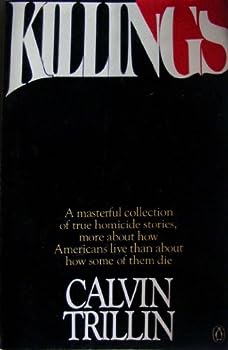 This description may be from another edition of this product. True stories of sudden death in the classic collection by a master of American journalism "Reporters love murders," Calvin Trillin writes in the introduction to Killings. "In a pinch, what the lawyers...

Couldn't wait to return to the next essay

Published by Thriftbooks.com User , 14 years ago
So unlike the modern obsession with glamor or headline-grabbing murderers or victims, this enthralling book collects a set of stories about killings that probably never should have happened. I almost felt as if I were back in the decades in which the essays were first written, from 1969-1982, so vivid are the details of setting and character. Exemplary journalistic writing. I have only one minor complaint, not even enough to subtract a star. That is, I wanted to know more about the ultimate outcomes of the cases. I'd like to see an updated edition with more information!

Return this to print: it's a classic!

Published by Thriftbooks.com User , 15 years ago
This book is the stuff of a classic and should not have been allowed to go out of print. The measure of a good to great book as far as I am concerned is that it represents not only the issues of the individual but also sends out definitive postcards from a certain time and place. Reading this collection of crime reportage that originally appeared in The New Yorker magazine in the author's "U.S. Journal" series, from 1969 to 1982, I am astounded how Trillin intuited the local and global struggles that continue to define the post 1960's social watershed in American precincts beyond more cosmopolitan cities. Trillin says that the story inherent in a sudden death-homicide, suicide or accident-is more often about how people live or the society in which they move. He finds understanding the place essential to understanding the crime. Most of the deaths are due to murder (the Penguin paperback cover blurbs say all are, but that's not true), and most take place in neighborhoods and among people of which townsfolk would say, but that wouldn't happen here and to them. Even when the death occurs in Miami (a prominent defense attorney), a barrio in Riverside, California, or in Tucson where alarms and guard dogs had become a way of life, the death is still a surprise. KILLINGS is first class journalism. The author's prose is fluent, immediate, and his information is beautifully ordered. You never know at the outset of a given story who will be the killer or the killed. He keeps himself entirely out of the action and is never judgmental. In an afterward he notes that one of the key players in a story later said of what appeared in the magazine, "If he had come two weeks later, he would have written a different story." Trillin agrees that this can be true-a writer enters the story at a particular plateau and much of the finished product depends on the known facts and current emotions on that plateau. All the same, while reading these stories, I had keen memories of the times and culture from which they sprang, and they still stand as short, accurate histories. Learning at a later time, for instance, who actually killed that defense attorney would not change the long term lessons of his story.

If I could give it ten stars, I would!

Published by Thriftbooks.com User , 19 years ago
Once again, I find myself titling a Calvin Trillin review, "If I could give it ten stars, I would!" Trillin is a national treasure. You've heard of Poet Laureates; well, Trillin ought to be our national Deadpan and Danged Funny Laureate. What may not be immediately evident on first reading his work is that the subtle humor that ripples throughout most of his stuff disguises an extraordinarily sharp mind and a nose for a wonderful story."Killings" examines the sudden deaths of a dozen or so ordinary Americans. Although Trillin touches on the manner of their deaths, what "Killings" is really about is the detail of these victims' lives. It is utterly absorbing and that rarity, a book you will enjoy even more on the second or third read than on the first. Trillin's apparent artlessness ensures that he, as author, never gets in the way of his wonderful, wonderful stories. Highly recommended!
Copyright © 2020 Thriftbooks.com Terms of Use | Privacy Policy | Do Not Sell My Personal Information | Accessibility Statement
ThriftBooks® and the ThriftBooks® logo are registered trademarks of Thrift Books Global, LLC