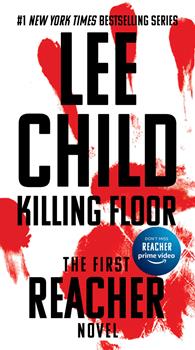 THE FIRST JACK REACHER NOVEL The bestselling novel featuring the "wonderfully epic hero"( People) who inspired the hit films Jack Reacher and Jack Reacher: Never Go Back. Ex-military policeman Jack Reacher is a drifter. He's just passing through Margrave, Georgia, and in less than an hour, he's arrested for murder. Not much of a welcome. All Reacher knows is that he didn't kill anybody. At least not here. Not lately. But he doesn't stand a chance...

Great story and plot but not so great ending!

Published by Jamie M , 1 year ago
I have suddenly decided I need all the Jack reacher books! Fantastic story can't wait for more. Although the ending wasn't great

Published by Ryderwriter , 1 year ago
I spose it helps that I have a life-long affinity for delta blues. However, you don't need to know a thing about blues and just what is a "killing floor" to appreciate this book. It was the first Jack Reacher book I read and it was enough to keep me reading the series. I've learned much more about Jack's upbringing, his family, is brother and why he refuses to settle down. He has become more real to me. I think the word that most describes the narration of Killing Floor is "compelling." I was compelled to keep reading. Chapters end on a cliff-hanger, so no matter how tired my eyes word, just one more chapter. Just one more chapter. Just one more chapter. Much of the time I read hard subjects of non-fiction, theology, history and politics. That too, may be a reason why I like the Jack Reacher Series. It's an easy and entertaining series.

Published by gracie , 1 year ago
while it kept me reading and i finished the book, overall i was kinda unimpressed. id be interested to see the movie to see how it compares to the book. i didnt like the main character, i found him annoying and strange. a big aspect of the book wasn’t logical so that kind of bothered me but oh well!

Published by kristi , 2 years ago
i bought this book on a whim, just looking for a new author, and Lee Child looked popular. the book has a great storyline, and i couldn't put it down. the characters were really interesting. i think i'm hooked on Lee Child's writing style, and the Jack Reacher series.

Published by Thriftbooks.com User , 2 years ago
Without doubt Lee Child is the best thriller writer of the moment, five years ago my Daughter started me on him, and now he is my favorite aurthor. I cannot praise him enough. Only one problem Tom Cruise miscast little runt cannot portray Reacher.

Published by Thriftbooks.com User , 5 years ago
A thriller for the more intelligent (or at least well read) reader. The pace is slower, the tension builds instead of smacking you in the face. Fairly graphic with lots of maiming, suffering and gore. Great read.

Published by Thriftbooks.com User , 15 years ago
I picked up "Killing Floor" in hardback on the clearance rack at Half Price Books for $1.00 about 7 years ago (good luck finding it now!) I knew nothing of the author and really just needed something to pass the time between Dark Tower installments. Little did I know... I literally couldn't put this book down from the time I opened it until it was complete. "Killing Floor" has an original plot, contains an interesting "hero", and kept me guessing to the finish. Since "Killing Floor" I have bought and reads ALL of Lee Child's books, all in hard back and all as soon as they were available, and have never felt cheated. I was concerned that the books would get boring after several installments (as with James Patterson's books, when you have the same indestructible character over and over, sooner or later you get tired of reading about them). Fortunately, each "Jack Reacher" novel has had a completely original premise, and I haven't gotten bored yet. I recommend this book wholeheartedly.

Published by Thriftbooks.com User , 17 years ago
This was our first Lee Child, and his first work introducing leading man Jack Reacher. Jack is a retired homicide investigator for the military police, and as this book opens, just roaming the country looking for something to grab his interest in life. We meet him minding his own business eating brunch in a diner in Margrave, Ga., where after a few minutes, the police storm the eatery and arrest Jack for murder! We all know he's absolutely innocent, but our attention was riveted by Child's technique of having Reacher actually start working the murder case as he himself is being interrogated as a suspect! Spending a day in the slammer as a material witness, along with an unfortunate banker named Hubble, whose phone number being in the murdered man's shoe makes him a suspect as well, Reacher kills (in self-defense) another inmate, the first in a series of brutal slayings depicted throughout the novel. So now we know Reacher can more than take care of himself both physically and mentally.Soon the police discover Reacher's got an airtight alibi for the murder; then it's discovered the victim is by total coincidence Reacher's brother Joe, a US Treasury special agent in charge of counterfeiting. And so the plot is off and running. Before it's over, some bad cops are unearthed, with we readers often getting to smell out the rat in advance, which was fun. Police Officer Ms. Roscoe, who took a shining to Jack upon sight, provides our hero a stirring and sexy romance, which was an interesting sub-plot with which we anxiously awaited resolution.To us, Child's writing skill, his pace and ability to sustain action and suspense, and his crafty plot with just the right amount of complications, has given us a page-turning, stellar new series to enjoy. Can't wait to read our next Reacher!

Published by Thriftbooks.com User , 19 years ago
Even though I read about fifty books a year in the Mystery/Thriller genre, this is my first introduction to Lee Child. He comes highly recommended and I'm now wondering why I waited so long to pick up one of his books.My immediate thoughts on this author are that I like his writing style. He writes like we speak -- shorter sentences and gets right to the point. My second discovery is his use of surprises. There's nothing I like more than reading a book where I don't know what's going to happen at the end of a chapter. I love having some of those "Oh, No" moments when settling down with a mystery. My third and probably most important reason for liking this book is the main character. Finally, I meet Jack Reacher -- 6'4", 36 years old, a former military policeman and, best of all, he's not a wise-guy. I don't know why most authors think they have to resort to the wise-cracking main character in order to have a successful book. To me, Jack Reacher is a refreshing change.The setting of this book, Margrave, Georgia, is reminiscent of a Stepford town. Everything is perfect, everything is clean, everyone is happy with their lives....until dead bodies start showing up. Reacher, who just happens to be wandering through Margrave, is immediately considered a suspect simply because he's an outsider. But little does this town know that it's the "insiders" they have to worry about as Reacher sets out to prove his innocence and seeks revenge for the death of someone from his past. And when Reacher sets out to seek revenge, he means it, as he has no problem at all in killing bad people.In the beginning of the book, he won't know whom to trust and neither will the reader. As the story progresses, however, you will become amazed at Reacher's intelligence and will become attuned to his deciphering of even the smallest clue.Jack Reacher has now moved right up on top of my list of favorite main characters in a mystery series. I've looked past the fact that he has no problem killing people.I'm just so glad that this is a series because it means that I get to visit with this pantheon of human pulchritude again and again and again. Next up....Die Trying.

Jack Reacher can have my number !

Published by Thriftbooks.com User , 21 years ago
I started with "Running Blind," Lee Child's third book, and finished it off in record time to jump back online to see what else Lee Child had written. The hero, Jack Reacher, was a military brat growing up, a military career man until the army downsized, and then became a drifter by choice. He's a one-man swat team correcting injustice as it finds him. In "Killing Floor" he just happens to get off the bus near the intersection of a small town in Georgia and after wandering on foot into the town of Margrave he is immediately arrested for a brutal murder which he obviously did not commit. He digs his way through several mysteries at one time including the identity of the murdered man. The suspense never lets up; there is a girl (a cop) that he loves but leaves with good romance and dialogue throughout. The only problem I had with the hero is that he arrives without any luggage and only occasionaly needs to buy a new outfit of clothes as he thows away what he has on at the time. He gives new meaning to traveling light. I'm going to quit writing now and start reading the next book..."Die Trying" I hope to see more of Jack Reacher after I have caught up with the next two.

Published by Thriftbooks.com User , 21 years ago
Wow, what a book! Lee Child has given us perhaps the most interesting and complex hero in some time. Jack Reacher is Clint Eastwood, John Wayne and Arnold Schwarzenegger rolled into one...but with much more personality and pizzazz! I'm only sorry it's taken me so long to read Mr. Child's book! The story is a riveting one, focusing on Jack's involvement in a crime in a small town in Georgia. Boy, does he make a mistake in deciding to stop off in this little burg, just to find out about a blue singing legend named Blind Blake. But, what a story unfolds. The dialogue is brisk, economical, and very involving! Along with Jack, there are a ton of characters that are so remarkably fleshed out and described, you would think this was a true crime story!There are scenes of nail-biting action; very graphic and disturbing scenes of violence; and amidst all this some really well-written scenes of sensitivity and poignancy. Jack's meeting with an old lady who once knew the old blues legend is outstanding in its emotional punch! Paul Hubble, the neurotic banker; Roscoe, the beautiful policewoman; Finlay, the chief of detectives; and the evil villains are some of the best written characters in recent mystery fiction.What is so amazing about this book is the way Lee Child has not only woven a complex murder mystery, but also a chilling tale of greed, madness, and lost loves and lives.This is an emotional, wrenching debut, and I cannot wait to start in on the rest of this series!An outstanding piece of fiction!
Copyright © 2020 Thriftbooks.com Terms of Use | Privacy Policy | Do Not Sell My Personal Information | Accessibility Statement
ThriftBooks® and the ThriftBooks® logo are registered trademarks of Thrift Books Global, LLC